We’ve all heard by now about the side benefits that came with the world’s lockdown to prevent the spread of the coronavirus: clear air, clean water, wildlife prospering, no traffic, etc. I have had my own personal benefit, one that also helps my church. 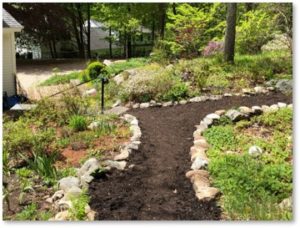 The path to the steps

Behind the First Parish of Sudbury, a Memorial Garden stretches up the hill in the woods. It’s a pretty big piece of land that runs from one side of the property to the other, with the Meetinghouse on the west and the stone wall of Mount Pleasant Cemetery on the east. Paths run through the garden and the land is planted with shrubs and trees in memory of parishioners who have passed on. Some of those people remain, their ashes returned to the ground.

I have worked in this Memorial Garden off and on for years. When I started, the Landscape Committee had many more members than it does now and we were all younger. Most of us are women. Over time, fewer people meant fewer gardeners and the Memorial Garden grew shaggy. Weeds grew, branches fell, shrubs died, and paths became overgrown. 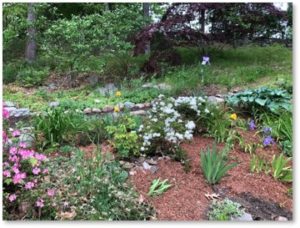 Because of the pandemic, I can go there several times a week and spend hours outdoors, sans mask, accompanied only by the birds, the squirrels and the chipmunks.

At first, I picked up and stacked dead branches from all over the garden, leaving them in neat piles by the side of the path for a younger gardener to move.

Next, I raked out a small portion that we call Helga’s Garden, named for the dedicated woman who planted it. Helga passed on a few years ago and the patch she had cared for was littered with leaves and overgrown with weeds and vetch. The latter is a ground cover, often planted to hold a slope in place. It’s tenacious, though, and persistent. If you have a little vetch this year, you’ll have a lot next year, and the year after that it will take over. Kind of like kudzu.

Ripping out the vetch became my next task. I had actually started doing this last year, so the worst of the job was done, but my war against the vetch continues. It has a way of popping up in new places, just when you think it’s gone for good. 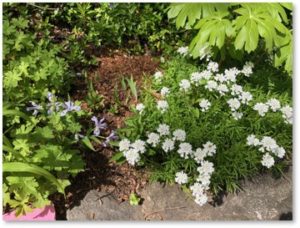 Candytuft, May Apple and dwarf iris

With most of the weeds removed, I dropped gallons of bark mulch to keep the them from coming back. While doing that, I noticed where the sun shone brightly and where it did not. Some sun plants, like iris, were now growing in deep shade where they never bloom.

Other shade-loving plants, such as hellebore, were frying in the bright sun. I began moving perennials to the right places for them to prosper. Now I’m adding in some new plants and I have plans for what I want to do next. My reach often exceeds my grasp, however. 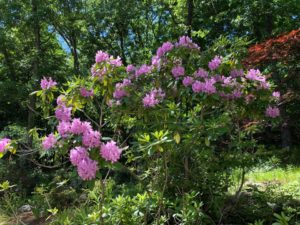 The big rhododendron in bloom

The thing is, without the pandemic and the lockdown, I would never have had time to do virtually any of this work.

At this time of year, leading tours in Boston would take up most of my days. Between driving in, checking people in, giving the tour, walking back to my car and driving home, I spent hours every week as a tour guide.

Between that, writing, publishing this blog, and working in my own perennial border, Helga’s Garden would have received short shrift.

So, there’s another unforeseen benefit of the pandemic. It may not be a big contribution and it may not be highly visible, but both the garden and I have benefited from the time I couldn’t spend doing other things. Others come to work there as well and, among us, we’re making some progress. 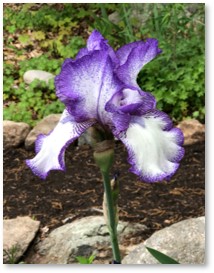 If you want to visit the Memorial Garden at the First Parish of Sudbury, here’s the easiest way to do it. Take the road up into Mount Pleasant Cemetery and park on the left just inside the gate. Then walk back through the gate where you will see a wooded area with a path on the right. Stroll down the path and wander through the upper section.

Without the available labor to keep this section up, so you will see mostly shrubs and wildflowers hardy enough to survive on their own. Feel free to pluck a weed or two as you go. Toward the bottom of the hill, you will see the more cultivated areas. Helga’s Garden is to the left of the stone steps.

If you meet someone pulling up vetch, it’s probably me. I’ll see you there.