We spent this past weekend in Washington D.C. and saw a treasure house of the nation’s art. The motive behind our trip was to attend the book party for “Magical: An Anthology of Fantasy, Fairy Tales and Other Magical Fiction for Adults,” which was held at The Writers’ Center in Bethesda, MD. That was fun and I got to read part of my story, “Elf Hill,” which is included in the book.

The next day, a cold and rainy Saturday, we headed to The National Gallery of Art on the Mall, across from the Smithsonian Air and Space Museum. I used to go to Washington every January for the old Comnet trade show but never had the time to be a tourist. So it was a huge treat to just walk into this wonderful museum with the entire day ahead of us. The East Wing was closed for renovation but the museum’s West Wing offered more than enough master works of painting and sculpture to occupy our day.

Property of the American People 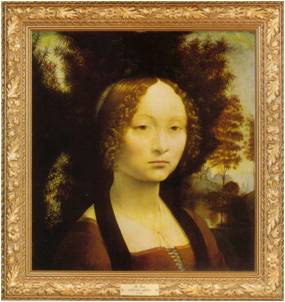 We started off with a visit to Ginevra de’ Benci, the only painting by Leonardo da Vinci in the United States. After that we wandered though European galleries and took in a special exhibit of paintings by El Greco.  After lunch in the Waterfall Café, which is located in the connecting tunnel underneath 4th Street NW, we visited the collection of American art, particularly works from the nineteenth century.

One of the things that struck me as I went from room to room is how the National Gallery acquired many of these works. Reading the information cards next to each painting or statue tells the tale: most of them came from one of two sources:

Whatever the source, however, these art works are now the property of the American people—all of us—regardless of where we fit in the nation’s economic strata. They belong to us and viewing them is free: there is no $20 fee at the front door to exclude people who can’t afford that kind of price—particularly for a family. If you pay your taxes, you own a piece of art history and you can just walk in the door to see it.

I’m happy that so many members of the One Percent had good taste because no one else in our country’s history had the money to commission portraits of family members by the likes of Gilbert Stuart, Rembrandt Peale, or John Singer Sargent. No one else could purchase a painting by Monet for the drawing room, a stained glass window by John LaFarge for the staircase, or a sculpture by Brancusi for the conservatory. Certainly, no one else could sort through art work accumulated over decades and decide to clean house by giving part or all of a collection to the people of the United States. Lucky us.

We tagged on to a docent tour and heard wonderful stories about several of the pieces in the American galleries, including William Merritt Chase’s “A Friendly Call,” (The name is sarcastic: the caller is not friendly at all.) and “Both Members of This Club” by George Bellows. The club being referenced is a nineteenth-century version of Fight Club, a way to evade laws against prize fighting. 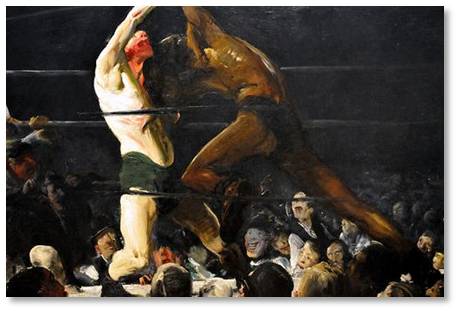 Both Members of the Club: Lightweight Champion Joe Gans (right) demolishes another opponent with his right punch

The next day we met with Cousin Heidi Kaplan and visited several of the monuments on the Mall. Then we hit the Hirshhorn Museum. This collection of contemporary art, donated by Joseph H. Hirshhorn, is housed in a torus-shaped building designed by Gordon Bunshaft of Skidmore, Owings and Merrill. In this case, the collection’s donor was a self-made man, an immigrant from Latvia, who made his first millions on Wall Street and then added more through gold and uranium mining projects. He kept a lot of it through means described as “controversial.”

I liked the building more than the collection. I have admitted that modern art is not my favorite style but I can be both charmed and amazed, as I was with the Yale Art Gallery’s collection. 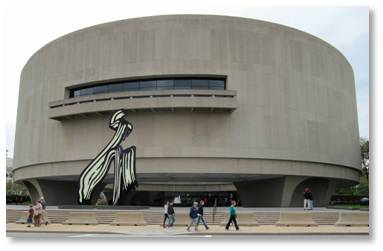 Many of @hirshhorn’s works that I might have enjoyed seeing  are not currently on display, however. So we finished our tour quickly and then headed off to the Museum of Natural History to pick up some Christmas gifts in the dinosaur gift shop.

We had a great time and I made another addition to my life list of art museums, which now totals 35. (It’s actually 36 but I can’t remember the name of the small museum outside Orlando, FL that we visited several years ago.) Despite the cold and raw weather, it was fun being in the nation’s capital just before Christmas and seeing the giant tree in front of the White House all lit up.

If you ever visit Washington D.C., make sure to visit the National Gallery (@ngadc). It’s well worth the time and you will be amazed to see what you own.