Like everyone else, I have heard the charges, accusations, and demagoguery around the concept of immigrants and foreigners “stealing” American jobs. This is crap. Let’s be perfectly clear on two points:

Immigrants Did Not Steal Jobs

The jobs that Mexicans, Haitians, Indians, Vietnamese and other immigrants take in the United States are jobs that Americans do not want. Whether those jobs are in the fields or the factories, they require a kind of hard labor that most Americans no longer want to perform. And we need immigrants to keep our economy running smoothly. 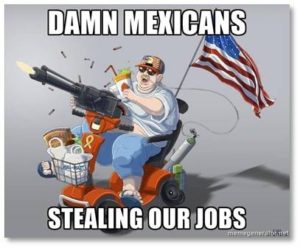 Our parents, grandparents and great-grandparents did those jobs when they first immigrated here. They worked night and day in horrific conditions to create a better life for their children. The children, grandchildren and great-grandchildren have since moved out of the fields and factories. They have gotten good educations and taken white collar jobs. They are not going back.

Americans Gave the Jobs Away

The jobs that many Americans want—blue-collar work that used to pay a living wage—have disappeared like snowbanks on a warm spring day. Those jobs may have gone to Mexico, China, Vietnam, India, or some other country with cheap unskilled labor but those workers did not steal jobs from Americans.

Nope. Americans gave them away. 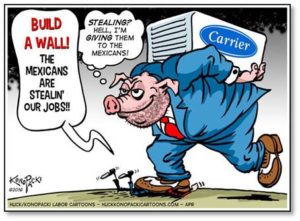 The Americans who made those decisions at companies across a variety of industries were and are (mostly) white, (mostly) male, (mostly) Republican. They are the CEOs, CFOs and other executives who run American business. As executives, they have a fiduciary responsibility to decrease costs and increase profits.

No Responsibility to Employees

They do not have that same responsibility toward their employees, the United States economy, or the balance of trade. Here are three examples out of many. Consider that when:

Clearly, a lot of people don’t understand this simple business fact. Perhaps they think that Mexicans streamed across the border to lay siege to Mr. Umpleby’s house or sent knee-breakers to threaten Mr. Hinrichs if he did not sign off on the deal. In the real world, however, that’s not the way it works.

The anti-immigrant rhetoric does serve a purpose, however. Divide and Conquer is a very old and successful technique. If you can set two groups with a lot to lose fighting one another over a very small piece of the pie they will never notice that you have the rest of the pie on your plate. 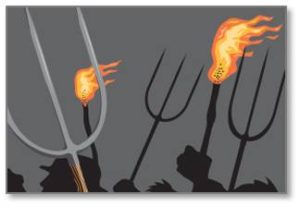 If you can convince them that this small piece is all that will ever trickle down to them you can make them desperate enough to hold on to their job at any cost.

My rule is pretty simple: follow the money. Turn around and look to see who profits from the outsourcing/offshoring deal. Are the Mexicans profiting? Sure, to the tune of good paying jobs. But the big bucks go to the C-level executives and Boards of Directors in salary, bonuses, and stock options. Compared to those, the Mexican salaries amount to crumbs.

And that’s why American jobs are still flowing out of the country and the pace is continuing.

Now here’s the thing, although I have to grit my teeth to say it: Donald Trump is right. The job exodus will not stop until it becomes more expensive to bring goods manufactured elsewhere back into the United States. 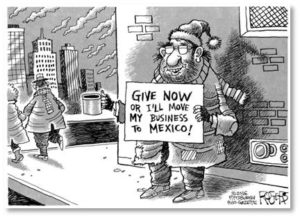 When gasoline prices were really high I thought that transportation costs would accomplish this. But no. So now we argue about tariffs and trade wars. Still, despite the President’s jawboning, the jobs continue to leave America.

The only other solution is to give America’s CEOs a fiduciary responsibility to the nation’s economy. I’m not sure how to do that.

Which leads me to some unpleasant realities that many of us would rather not face. That post comes tomorrow.

2 thoughts on “Did Mexicans Really Steal Jobs from Americans?”