“SOMETHING there is that doesn’t love a wall,

That sends the frozen-ground-swell under it,

And spills the upper boulders in the sun;

And makes gaps even two can pass abreast.”

The wall before repairs

Like Robert Frost, I have an old stone wall behind my condominium. It is part of the 240,000 miles of stone walls that run through New England, many of them as abandoned and dilapidated as this particular stretch. The old wall once separated the farm on which my community is built from woods—or possibly another farm. Now the Charter Oak Golf Course spreads out to the east, green and manicured. Our condominiums have replaced the livestock that once roamed on this side.

Still, changing the way land is used doesn’t alter the effects of New England climate on stone walls—or the ground on which they are built.

“He is all pine and I am apple-orchard.

My apple trees will never get across

And eat the cones under his pines, I tell him.

“I have come after them and made repair

Where they have left not one stone on stone,”

Over the years, rocks have toppled to the ground and residents here have mined the wall for stones to add visual interest to their flower gardens. Neither of the landowners on either side of this old boundary have walked the line to “set the wall between us once again.” Last year, though, I began moving the stones that accented my perennial border and putting them back in their places on the wall. This spring, as soon as the snowmelt allowed, I continued my rebuilding efforts for the part of the wall that stretches behind my yard.

First came the stones that had tumbled from their perches and lay either next to the wall or partly buried in the ground alongside it:

“And some are loaves and some so nearly balls

We have to use a spell to make them balance:

“Stay where you are until our backs are turned!”

We wear our fingers rough with handling them.” 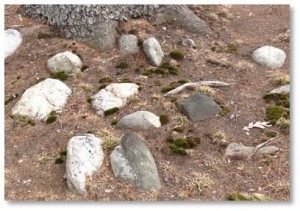 I wear gardening gloves to protect my hands but the stones do come in many shapes, some of them easy to lay on and others quite difficult. It’s as if they dislike the sun and want to go back to the earth into which the glaciers ground them.

Although I can’t replicate what strong farmers once did with the aid of hired men, hefty sons, oxen, and draft horses, I do my best. My husband has promised to help with some of the bigger rocks, levering them back into line.

One of Mr. Frost’s gaps allows me access to the rough around the golf course’s first green where rocks are scattered across the ground like petrified Canada geese. (Shsssh, don’t tell anybody!)

I have been picking up the ones I can carry and using them for additional building blocks, fitting them in wherever I can. There are even some nice flat ones that I use to make a straight line across the top. I don’t think the golfers will miss them. It’s good exercise and I love being out in the fresh air, even if it is still cold and windy.

“Spring is the mischief in me, and I wonder

If I could put a notion in his head:

“Why do they make good neighbors? Isn’t it

The Irony of Mending Wall 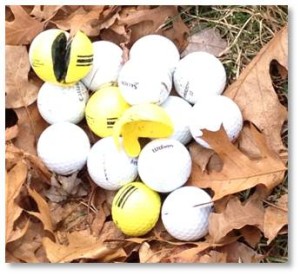 The Peeps are already hatching

I realize there’s an irony in this. We moved here, after all, partly to get away from time-consuming, back-breaking yard work. But there’s a difference between maintenance that you have to do even if you would rather read a book — because you’re tired or the weather is bad — and going outside whenever you feel like it to do something that you enjoy. This wall repair that I have undertaken isn’t a chore, it’s just fun.

Spring indeed makes mischief in me as I go stone hunting. (I have to be careful where I step between the deer scat and the goose poop.) The snowmelt, sluggish as it may be, now reveals golf balls that have wintered over. Once they were hidden by lush green weeds that the fall turned brown and winter flattened with snow. Now the Titleists and Wilsons pop out like round birds’ eggs in nests of shriveled leaves. They are, in their way, a harbinger of spring.

“I see him there,

Bringing a stone grasped firmly by the top

I hope I don’t look savage when I go about my repairs but I do grasp those stones firmly as I carry them to their new place in the wall. From the golf course you can’t really see it well, even now that the rough is uncluttered by undergrowth. I also hope that the folks there won’t mind that I’m re-purposing their random rocks to make whole again the boundary between us. After all: