Ah, male entitlement. Those of us who fit into the XX camp are very familiar with it while many of the XYs deny that such a thing even exists. Recently Politico revived a story told by Senator Kay Hagan in 2009. In “The Secret History of Women in the Senate,” author Liza Mundy recounted how Senator Hagan, newly elected to represent North Carolina, wanted to go for a swim in the Senate pool. 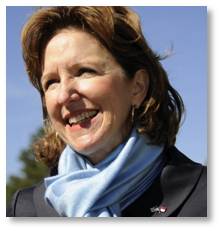 Now, this is a facility that most of us didn’t know existed. I always figured that Senators got their exercise in gyms and health clubs that they joined with the salaries paid to them by millions of ordinary taxpayers in the same way that we taxpayers do. But no.

After all, that would put members of that august body into proximity with actual people who are not (A) members of Congress or the current administration, (B) K Street lobbyists, (C) campaign contributors, or (D) part of their “Base.” Which is to say, the taxpayers who pay their salaries. So we built them their own pool instead.

Note: A Google search on where and when this occurred did not turn up any data. If you know, please send along a Comment.

The senators do pay an annual membership fee but one can’t help picturing them lounging around the pool in togas, eating peeled grapes and swilling wine out of silver goblets. Oops, forget the togas. Our senators liked to swim in the nude. When Sen. Hagan wanted to use the pool, she was barred because the men enjoyed letting it all hang out and that meant keeping any women out of the facility.

This creates one of those mental images that I, at least, would really rather not have in my head. The idea of octogenarians like Chuck Grassley, Daniel Inouye, Richard Shelby and Orrin Hatch providing a full, unimpeded view of their wrinkles, age spots, bulging bellies, sagging butts, and jiggling junk evokes an emphatic, “Eewwww.” 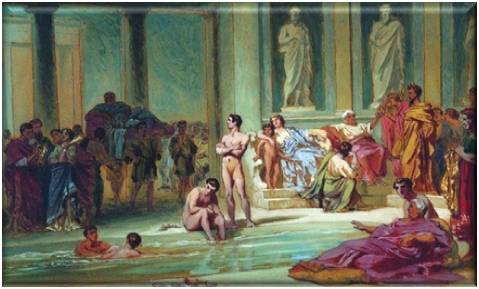 “In the Roman Baths” by Fyodor Bronnikov

What’s much worse, however, is that these men saw nothing wrong in denying to women the use of a facility that was (A) paid for by all taxpayers both male and female and (B) a perk of the job that Senator Hagan had earned fair and square. One might say that they simply liked things the way they were and, thinking conservatively, eschewed change. But that doesn’t’ absolve them or explain why men in both parties were party to this discrimination.

It only ended—and even then with a fight—when New York Senator Chuck Schumer, Chairman of the Rules Committee, changed the rules. He forced the boys to pull up their shorts and relinquish their dominion over the Senate pool.

This, people, is male privilege on full frontal view. This is men having things the way they want them at the expense of women. This is men using their power and position to put themselves one up and women one down so as to perpetuate and reinforce power and privilege. This is men keeping uppity women in their place by snubbing them and placing obstacles in their way. This is what you get when you believe that “boys will be boys” even when they’re long (long, long) past boyhood.

As @LizaMundy says about all the women in the U.S. Senate , “But there’s another present too, of exclusion and unstated assumptions; these women have all found themselves at one point or another uncomfortably aware of being outsiders in an environment conceived and constructed for men.”

Who were the most egregious offenders?  One was Senator John Warner [R] of Virginia, although his staff won’t comment on it. Another was former Senator John Ensign [R] of Nevada, based on information provided to a web site appropriately named Gawker. It’s unlikely that the pool stayed open for only two men, however, so we can safely assume that many others cannonballed into the water with them. The rest aren’t admitting anything. 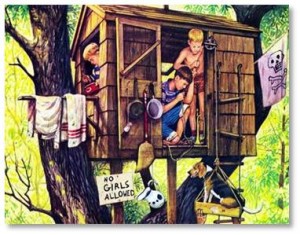 Why? Are they embarrassed by behavior that they weren’t embarrassed to perform—especially by asserting their privilege in such a crude and obvious way? This raises a second image: the boys putting a “No Girls Allowed” sign on their treehouse. Whether it’s a treehouse, a clubhouse, a man cave, or the swimming pool, the purpose is keep girls from bringing their girl cooties into the male sanctuary.

There’s another reason, though. As Margaret Atwood famously said, “Men are afraid that women will laugh at them. Women are afraid that men will kill them.” Men are never more vulnerable to female laughter than when they are naked. The senators had no problem displaying their BSDs to one another but weren’t inclined to let women have a gander at their precious equipment.

In the past seven years have the senators behind the boycott figured out what they did wrong or are they just lying low? Given the number of statements made by male members of Congress over the last seven years about “female” topics from rape to conception, I tend to think they haven’t even learned basic biology. Or that women don’t have cooties.

What I know is that I’ll never look at some of these senators in quite the same way again. And I’ll think carefully the next time someone asks me if I want to go hang out by the pool.