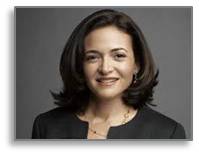 In yesterday’s post, I dealt with Part 1 of the reaction to Facebook COO Sheryl Sandberg’s book, Lean In, Women, Work and the Will to Lead, which was the reaction of other women. Today I want to discuss the missing piece of this ongoing conversation about how women get ahead in the business world, which is the reaction of the men.What reaction? What men? Oh, right, virtually all the intelligent and impassioned responses to the book and to @SherylSandberg’s many interviews have come from women. Except for Dan Zevin’s snarky parody in the New York Times (@nytimes), Lean In, Buddy Boy, the men have been mostly silent.

Well, why not? What do they have to gain from jumping into this discussion? Absolutely nothing. And men have learned to lean back from this particular red-hot poker unless forced to do otherwise. I think there’s another reason as well. As Lily Tomlin used to say in her role as Ernestine, the telephone operator, “We don’t care. We don’t have to. We’re the phone company.”  Men don’t care about this particular issue because they don’t have to. They’re in charge—and we’re doing all the work of figuring it out for them.In Monday’s interview with @Soledad_OBrien on CNN’s Starting Point, Ms. Sandberg mentions the role of men, but it’s in general terms of what men need to be doing to change things. Here’s the thing, though: men don’t have a business reason to be doing anything. As Ms Sandberg says, men run the business world. They are the wizards behind the curtain—and in front of it, too, no matter what they might say. That’s no surprise to any woman who has ever worked in America, although it seems to be something of a shock to young women just starting out. The secret of why men are the missing piece in this conversation lies in how boys and girls are socialized.

According to Pat Heim, Ph.D., in her excellent book called Hardball for Women, boys are socialized to be competitive, to be a good team player and obey the coach, to be aggressive or to at least “posture” aggressiveness, to be a leader who stays focused on the goal, to take criticism and praise, and to have a game plan because winning is all that matters. If you compare that with yesterday’s description of how girls are socialized, you will see that (A) they are very different, and (B) there is little in the female way of doing things that boys would admire, want to imitate, or find valuable for oh, so many reasons.

Looking Up, Not Down

In business, men are the dominant players and dominant groups don’t look downward. If you want to succeed, you emulate those above you, the ones who have more power and authority, not those below you in the hierarchy. Thus, women read books about and pay attention to how men think and act study what men’s business rules are, and attend seminars on how to succeed in a male environment. Men do not attempt the same understanding for women. They take it for granted that men’s rules—the only rules that matter—apply to everyone. They take it as a given that everyone is business should act as men do.There are, of course, jokes and comedy routines about the differences. Husbands might read about Mars and Venus but, if they actually apply that knowledge, it’s only to the home and not to the business world. Business is a man’s world; always was and, they probably think, should always be. Why change? After all, what can women add that will help a man be more successful?So women continue to struggle. In yesterday’s interview, Ms. Sandberg gives reasons why men would want to lean in themselves, and seek to advance women in the workplace. “It should be a badge of honor to mentor a young woman,” she says. Later, she comments that it’s too hard for men to talk about gender. “We have to let men talk about this.” Also, “I hope men enter the conversation and the controversy around my book, because — and every issue, not just mine, every issue –. because we need men to talk about this, too, if it’s ever going to change.” Well, “should” and “hope” are not words that work in the corporate environment. Try putting them in your business plan and see how well it goes over in the executive suite.

We certainly do need men to talk about this—they are the missing piece—but it’s not up to us women to allow those sensitive souls to do that. Men have to want to do that.  Nicole Pollizzi gets tougher with men in her article on @PolicyMic.com: Sheryl Sandberg’s Lean In: Men Must Lean In Too. She notes, accurately, that the problem is not the lack of women working to change things. Then Polizzi opines that the reason is that men devalue women’s work.  While that’s certainly true of housework and childcare, I don’t agree that it’s a valid reason in the business world.  The work that needs doing inside organizations has value in men’s eyes; it’s women and the style in which we work who don’t.

This has nothing to do with having it all, doing it all, covering all the bases, or finding a balance between work and family life. It has nothing to do with the fast track, the mommy track or breaking the glass ceiling. It has to do with men thinking and behaving differently than women do and having no respect for the way women do it. And here’s the really big thing: we can’t change that all by ourselves, no matter how hard we try.Men have to lean in themselves and make an effort. As Ms.Pollizzi asks, “So, at the risk of sounding supremely lazy, my question is, after ‘leaning in’ all the way for the last century or so, when should we expect our male counterparts, and bosses, to lean in and meet us halfway?” Even in this totally reasonable statement, she has to qualify her question so she doesn’t sound “supremely lazy.” What is lazy about asking men to do something?

When, indeed? What does it take to get men get past their socialization to see that women bring strengths to business that go far beyond work/life balance? What does it take for men to understand that women are smart and resourceful, add a valuable perspective, have a great work ethic, can multi-task efficiently, work well on teams, and are as dedicated to their jobs as men are? Here are a few possible drivers of change:

The bottom line is simple: this has to be a joint effort. We have to lean in together and men have to act, too.  At some point, it’s less important whether women are tougher or sweeter, whether we smile or pound the table, whether we take risks or play it safe. Businessmen have to get involved. It’s past time for male executives to step out from behind the curtain and take some positive action.