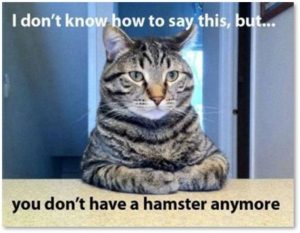 When I saw this picture, I laughed because we actually lived this mystery story.

It happened a while ago. We had gone away overnight on a college interview tour and left the cat alone with enough food and water to last until the next day. When we returned, we found Houdini safe and sound, taking a nap. Houdini was a tiger cat who looked very much like the one in this picture.

A Mess in the Hall

On the floor of the upstairs hall, however, I discovered a mess that looked like kitty had barfed up half his guts. But Houdini looked fine, not in any distress whatsoever.  What to do?

I scooped up the mess and took it to the vet the next day.  I explained what had happened and how we were concerned that something awful was wrong with Houdini. The vet looked at the innards and said, “Do you have a small rodent in the house?”

The vet nodded sadly. “Have you seen it lately?”

I went home and looked in the hamster’s cage. Empty. Hmmm. 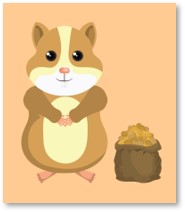 The hamster, a Siberian dwarf named Bungie, lived in a glass aquarium-style cage with a half-inch screen on top. A rock weighted the screen down to keep it in place. The screen had not moved. The rock was in place. The cage was empty. How could this be?

The people at the shelter where we got him called our cat Houdini for a reason: He could hide in an empty room. Clearly, he had learned some escape-artist tricks as well and taught them to the hamster. And then Houdini committed cold-blooded hamstercide.

I pictured the scenario only too clearly.

The house is empty and quiet. Houdini is bored. He thinks of something he’s always wanted to do and decides this is the time to try it He climbs the stairs to the bedroom, jumps up on the desk and sits by the cage. The hamster comes out and watches him through the glass, twitching his nose.

Houdini: “You know, it’s a shame you have to live in that cramped cage. I have the whole house to roam around in. It’s nice.”

Houdini: “What? Safe from me? You have nothing to be afraid of. We’re part of the same family.”

Bungie: “Sure, but you’re bigger than I am. You have such sharp teeth—and so many of them.”

Houdini: “All the better to eat my kibble with. But I would never hurt you.”

Bungie: “Still, I just feel better in here by myself.”

Houdini: “It’s sunny in the family room. You could come down and nap in the warm sunlight with me.”

Bungie: “Sounds nice. And I would like more room. This thing is awfully small and I’m really tired of running on that wheel.  But I can’t get out, you know. The walls are too high.”

Houdini: “Hmmm. But if you stood on that oatmeal box and stretched waaayyy up, you could do it. Give it a try and we’ll see.”

(Bungie scrabbles up the Quaker Oatmeal box’s curved side and tries
to climb up the glass cage. He fails.)

Bungie: “Nope. Not quite. I told you it wouldn’t work.”

Houdini: “But you’re making progress. Now try this. Jump as high as you can and grab the screen. Then you can pull yourself up.”

(Bungie jumps straight up, hangs for a second, and drops back down.)

Houdini: “Try it again. Only this time grab the screen right next to the edge of the cage and pull yourself up onto the rim. I’ll help you if you get stuck.”

Bungie: “You think that will work?”

Houdini: “Suuure. You can do it. Remember, if you get stuck, I’ll pull you the rest of the way out.”

(The hamster jumps. Grabs. Pulls himself onto the edge of the cage.
Scrabbles to get some purchase with his hind legs.)

Houdini: “You’re almost there! Come one, pull just one more time and you’re out.”

(Bungie pulls harder and pokes his head out between the cage and the screen.)

(Houdini grabs Bungie by the scruff of the neck and pulls the hamster out.
Holding tight, he jumps down from the desk and heads for the door.)

Houdini: (Silence) Walks into the hallway.

Bungie: “Put me down! I want to stretch my legs.”

(Houdini lowers the hamster and uses one paw to pin him to the floor.)

Bungie: “That’s better. But take your paw off my back. It hurts.”

Houdini: “I have an idea. Let’s stay right here and play a little game. I’ll let you go and we’ll play tag.”

And that’s how we arrived home from a long drive to find a happy cat, a disappeared hamster, and a telltale heart. (Also, lungs, digestive tract, etc.) 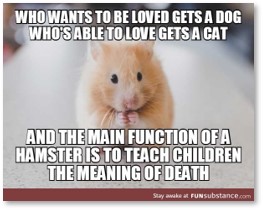 The moral of the story is to never trust that someone else has your best interests in mind, no matter how helpful they sound. Especially when they’re bigger than you are and have a lot of sharp teeth.

You know those pictures of animals you see on Facebook? The ones where pets that should be enemies snuggle up together and become best friends? Yeah, don’t believe that. Especially if you’re a hamster.