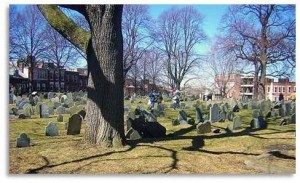 On Saturday evening I lead my first regularly scheduled walking tour—the Dark Side of Boston—for Boston By Foot. We go into the North End uphill and down, through history from 1688 to 1983, across cobblestone streets and along narrow alleys.

On the way we meet a varied cast of characters from Goody Glover (the last woman hanged for witchcraft on Boston Common) and Onesimus Brown (who told Cotton Mather how to inoculate against smallpox)  to Charles Ponzi (inventor of the Ponzi Scheme) and John White Webster (who murdered Dr. George Parkman).

The tour is a lot of fun. I enjoy meeting people from around the U.S. as well as other countries and answering their questions. I like being in Boston at night and getting some exercise at the same time. My husband often comes into town with me and we go out for dinner afterward.

Now if only the weather would cooperate.

Even though the @bostonbyfoot tour season is just beginning, I have already led two tours. This year’s tenacious winter weather was not on my side for either, however. In “A Springtime Leap of Faith” I detailed the bitter cold that took some of the fun out of a private Dark Side tour for some conventioneers visiting Boston from the Mid-Atlantic States. 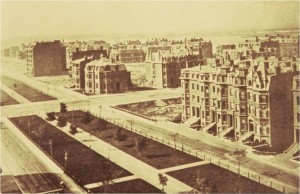 Commonwealth Avenue in the Nineteenth Century

On Saturday I gave a lecture on the Back Bay at the Brookline Center for Adult Education. Then we took the train into Boston for a tour of the area. The day was bright and sunny with temperatures that started in the fifties. It felt like a gift—spring arriving at last. Buoyed by unwarranted optimism I left my gloves in the car.

By the time we got to the T’s Copley Square station, however, the temperature had dropped and a wicked wind was howling from the west. The temperature continued to fall during the tour and I regretted leaving those gloves behind. Winds were so bad on the east-west streets, particularly Commonwealth Avenue with its wide mall, that I changed where I stood to talk. Instead of exposing the tourees to gusts of fifty to sixty miles per hour on the street corners, I grouped them next to buildings that blocked the relentless Montreal Express so we could focus on the subject at hand.

The Lecture Before the Tour

Despite the cold and the wind, we had a great time. The lecture gave me the opportunity to talk in detail about why the Back Bay was filled, when and how it was done, and how it became an upscale neighborhood. I could show maps of the Shawmut Peninsula’s original shoreline and the layout of tide-powered mills that first occupied the Back Bay. We looked at drawings of gravel being removed from Needham and the process of filling in and building on the”New Land.” We also saw examples of the different architectural styles of structures and homes in the Back Bay, which I pointed out when we walked around the area.

Having woken up this morning to winter cold and snow on the ground, I watched the weather forecast for this weekend with my fingers crossed. Good weather is needed for Saturday’s tour. Fortunately, the prediction is high temperatures in the fifties dropping into the forties by evening with only a light wind. Conditions should be much better for a walking tour.

But I’m bringing my gloves. 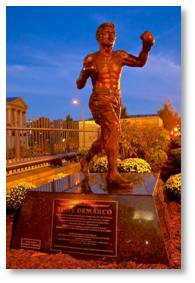 If you’re interested in having a docent give this lecture / tour combination of the Back Bay or any of the Boston By Foot tours for your company or organization, just contact the Boston By Foot office at 617-367-2345. You can also schedule a private walking tour for people coming into the city for business, conventions, meetings, or other events. People who have never been in Boston before love the in-depth information they get from our docents. Trust me; I’ve seen it first hand.

If you want to go out on the road with me this Saturday or any other weekend in April and May, check out my tour schedule. I’ll be at the intersection of Hanover and Cross Streets by the statue of Boxer Tony DeMarco at 6:00 p.m. on Saturday for the Dark Side of Boston tour. See you then. Dress warmly.