On Thursday afternoon we were sitting on the deck behind our condo reading when I caught some motion on the stone wall that runs between us and the golf course. This isn’t unusual: squirrels and chipmunks use the stone wall as their private highway as do cats, including our own. When I looked up, however, I was astonished to see three mature fisher cats bounding along the wall.

I had noticed their tracks this winter but never thought I would see them so up close and in broad daylight. So now I’m sure there are fisher cats in the neighborhood. 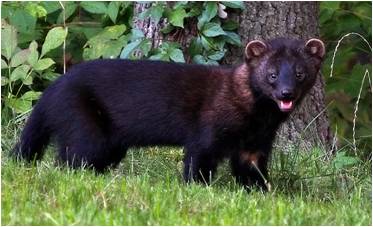 Fisher cats (martes pennanti) are members of the mustelid, or weasel family, although they are bigger and darker than weasels or martens. The three I saw were typical: long bodies covered with dark brown/black fur, round ears, bright eyes. Fortunately, I wasn’t close enough to see their long sharp teeth.

Weasels eat small rodents. Fisher cats eat pretty much whatever they want, which is mostly small to medium-size animals. With long claws, they climb trees to hunt porcupines, one of their favorite foods. Small dogs and house cats will do just fine, though.

The three visitors bounded along the wall until I stood up to poke my husband, who had fallen into a deeply relaxed state indistinguishable from sleep. The middle fisher stopped and looked at me with his piercing eyes as if noticing a mere human on his turf for the first time. Then they all kept on going as if headed home for dinner, even though it wasn’t Prince Spaghetti day. I wish I’d had time to take a picture but they were quick.

Mystique watched all this from where she was crouched under the day lilies. Hidden by their leaves, she can keep an eye on the chipmunk hole without being seen. (Today’s score: Mystique 4, chipmunks 0) I hope she was paying attention because the ways in which she can protect herself from coyotes (climbing trees, hiding under the deck) don’t work with fisher cats. They can go right up a tree after her and live in underground dens. There’s no keeping kitty inside so I hope she’s faster than they are.

I went online to make sure that I wasn’t mistaking my visitors for something less rare and lethal but I wasn’t. There was really nothing else they could be. I also listened to their cries so I can identify them if I hear them, especially at night. It’s a good thing I did because their high-pitched screeches sound like someone is being murdered—slowly and with a blunt instrument. At least now I will know that’s not the case. A recording of these sounds would work well in a Halloween haunted house. 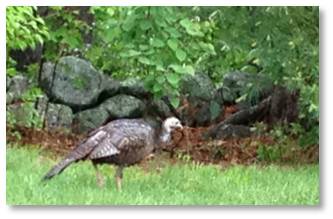 The wild turkeys who also parade around behind our condo can fly—if they see the fisher in time. So now we have coyotes, fisher cats, wild turkeys, Canada gees, squirrels, rabbits, deer, chipmunks and probably some assorted wildlife that has managed to evade human notice, in our neighborhood. For a place with so much open space nearby, it’s getting crowded here.