“Prophet!” said I, “thing of evil!—prophet still, if bird or devil!—
Whether Tempter sent, or whether tempest tossed thee here ashore,
Desolate yet all undaunted, on this desert land enchanted
On this home by Horror haunted—tell me truly, I implore—

Is there—is there balm in Gilead?—tell me—tell me, I implore!”
Quoth the Raven “Nevermore.” 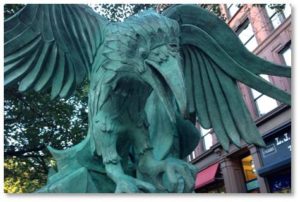 Boston has a lot of carved and sculpted birds, most of them eagles of varying sizes ornamenting building facades. Also, we can’t forget the Make Way for Ducklings statues in the Public Garden. Another far more dramatic bird looms on a sidewalk across from the Common.

The Raven is part of a sculpture called “Poe Returning to Boston” located in Poe Square on the southeast corner of South Charles Street and Boylston Street. The statue shows Poe’s raven flying from his side and this dramatic bird symbolizes the author’s worldwide fame.

But why does Boston have a statue of Edgar Allan Poe and his famous raven?  Although he is usually associated with Baltimore, the city in which he died and was buried (and which named its football team after the bird), Poe actually comes from Boston. The house on Carver Street in which Edgar Poe was born, along with the street itself, were demolished in a 1960s burst of urban renewal but a plaque commemorates the spot. 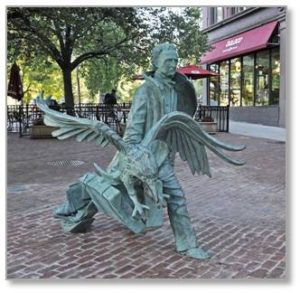 Poe’s parents, both actors, took him out of Boston before he was a year old. By age three he had been orphaned. A prosperous merchant in Richmond, Virginia, named John Allan took him in, adopted him, and renamed him Edgar Allan Poe.

Forced to leave the University of Virginia when John Allan wouldn’t pay his gambling debts, Poe returned to Boston in 1827 and joined the United States Army. He served a five-month stint at Fort Independence on Castle Island in Boston Harbor.  There he got the inspiration for his short horror story, “The Cask of Amontillado.” He also published his first volume, “Tamerlane and Other Poems” the same year.

At this point, Poe identified himself as a Bostonian but he developed a Love/Hate relationship with the city. It swung more towards Hate when in October of 1845 he was invited by James Russell Lowell to give a reading to the Boston Lyceum. This took place at the Odeon Theater on Federal Street. Not only was this the city’s oldest theater, designed by Charles Bulfinch in 1794, it was a theater in which his mother had performed “to great acclaim.” He read “The Raven” as well as a long, obscure poem called “Al Aaraaf.” Critics panned his work, however, and that rejection marked a turning point.

Poe went on to attack Boston poets, particularly the Transcendentalists, whom he called “Frogpondians.” He found their croaking work, particularly that of Henry Wadsworth Longfellow, preachy and moralistic, guilty of “obscurity for obscurity’s sake.”  Poe accused Longfellow of thematic plagiarism and the two men of letters engaged in a long, contentious dialog that became known as The Longfellow War.

The Raven in Words 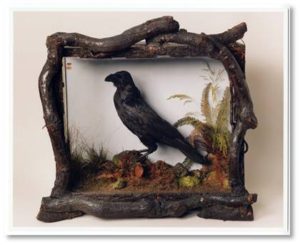 Poe based his poem “The Raven” on Grip, the raven in Charles Dickens’s novel “Barnaby Rudge,” which was based, in turn, on the Dickens family’s pet bird of the same name.

Poe had met both Dickens and Grip in Philadelphia in 1849. Upon the bird’s demise, Dickens had Grip, about the size of a small cat, stuffed. Grip now resides in the Rare Book section of the Free Library of Philadelphia.

There comes Poe, with his raven, like Barnaby Rudge,
Three-fifths of him genius and two-fifths sheer fudge,
Who talks like a book of iambs and pentameters,
In a way to make people of common-sense damn metres,
Who has written some things quite of their kind,
But the heart somehow seems all squeezed out by the mind.

Unlike the bird in the poem, who merely flew in and sat on a bust of Pallas, Boston’s raven is huge and full of life. Considerably larger than a cat, he seems to explode from the statue as he takes flight. The statue of “Poe Returning to Boston” by artist Stefanie Rocknak, was unveiled in 2014 after years of fund-raising by the Edgar Allan Poe Foundation. It shows the author just off the train and striding toward his birthplace on Carver Street with his coat flared out behind him. His back is firmly turned to both the Frog Pond and Cambridge, the home of Henry Wadsworth Longfellow.

Poe is accompanied by his raven and carries the Telltale Heart in his suitcase, which has fallen open. Pages of work written in or about Boston spill out and are scattered across the bricks of Poe Square all the way back to Boylston Street.

Poe Square, at the corner of Charles Street South and Boylston Street, is easy to find and open all the time. “Edgar Allen Poe Returning to Boston” strides along the bricks at sidewalk level so you can easily miss it if you expect to see the statue up on a plinth. Notice the pages on the ground as well as the plaque on the wall opposite the statue. 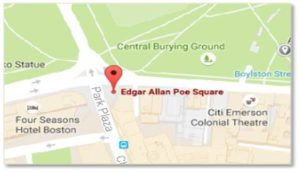 You can park at the Boston Common Garage and walk south toward Boylston Street. Or take the MBTA’s Green Line to either the Boylston or Arlington stations and walk toward Charles Street.

To read about the other animal statues in Boston’s Bronze Menagerie go to the Posts About Boston page.