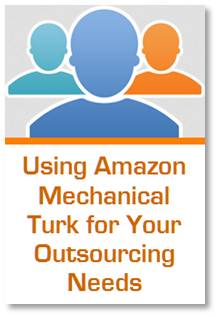 Last night I heard a story by Gabrielle Emanuel on @NPRs All Things Considered about a service offered by Amazon called Mechanical Turk or MTurk. It’s called, “Post a Survey on Mechanical Turk and Watch the Results Roll In.” @amazon defines this service as “a marketplace for work,” and MTurk is one of several such sites. There are two parts.

Before you get all excited about an easy way to make money at home, let me tell you up front that payment is offered, literally, in pennies. Some task pay 25 cents, some 75 cents, some only a dime. One of the workers interviewed say she spent six to eight hours a day performing HITs and made about $2.50 an hour. That’s what a waitress earns before tips. Of course, you don’t have to carry heavy trays or put up with surly customers, either.

This service was launched in 2005 and went public in 2008 but is still in beta software that is full of bugs. That’s a good reason to be cautious. I see @amazonmturk users on this blog and delete them as soon as possible because they’re spamming. What caught my interest in this online marketplace, however, were both the concept and the name.

A Story of Dystopian Detroit

Several years ago I listed to an anthology of short stories about future cities. The title had Metropolis in it but I don’t remember the book’s full name. Included in that anthology was a story set in a version of Detroit where most people squat in the ruins of the city’s many abandoned houses and cobble together work anyway they can. Most of them do this by logging in to an online marketplace where work is “turked out.” If you are a lawyer, for example, you look for someone who is turking out a brief or other legal document and you bid. If you’re the lowest bidder, you get to perform this particular chunk of work and then you go looking for the next one.

In the story, this is a good way for unscrupulous people to get someone to perform illegal or dangerous work without endangering or incriminating themselves. The underclass of turk workers, many of whom once had good jobs that paid well, now scurries through the ruins of Detroit, trying to piece together enough chunks of work to eat and otherwise keep their heads above water. Should the worker get caught doing an illegal job—by either the police or a shady character on the other end of the deal, he or she can argue that the job was turked out and not their responsibility. This excuse may get them out of the scrape with their skins intact. Or not.

I wish I could remember the name of the author and the title of the anthology but they have been erased from my mental ROM. If anyone knows, please comment with that information. 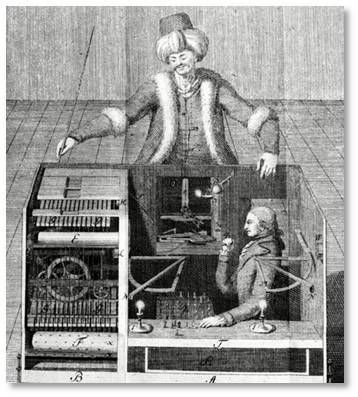 In both the short story and the MTurk system, the name Mechanical Turk came from an 18th-century automaton, a chess master that could supposedly beat any human. This mechanical figure of a mustachioed man in Turkish dress was seated atop a cabinet that held a chessboard on its top.

The marvelous Mechanical Turk was the Watson of its day, beating all comers at chess—until it was revealed to be a fraud. Although the cabinet appeared to house an impressive clockwork mechanism, this was an illusion. A real human actually slid into the cabinet and manipulated the automaton’s arms to move the chess pieces.

There are two synergies between the Original Mechanical Turk and its modern computerized counterpart.

1.Smart People Will Work Cheaply: The automaton’s owner, Johann Maelzel, “staffed” the device with strong local chess players in whatever city the performance was being held. As Adam Gopnik says in the BBC News Magazine, “So the inventor’s real genius was not to build a chess-playing machine. It was to be the first to notice that, in the modern world, there is more mastery available than you might think; that exceptional talent is usually available, and will often work cheap.” Sound familiar?

2. Inspiration Strikes at Any Time: in 1821, mathematician Charles Babbage lost two games against the Mechanical Turk. The experience gave him the idea for a mechanical calculator, however, and he later invented the Difference Engine, a mechanical precursor of today’s computers.

Art and Life: Which Comes First?

Did art imitate life or did life imitate art? Did the short story inspire Amazon to adopt the name or did the author build on Amazon’s concept to create a dystopian future that, sadly, appears to be coming true? Which came first?

The internet lends itself to both illicit and anonymous activity. Mechanical Turk uses smart people who will work for pennies to get things done. Right now, people are either supplementing their income or creating a minimal income stream by performing HITs on MTurk. How long before the 21st-Century progression of jobs gets there?

We have gone from full-time jobs, to part-time, to contract work, and to temp work. Is turking out your job the next step?

Yesterday I asked the question, Can We Tell When We Hit Bottom? Mechanical Turk expands that query. How will we know where the bottom is?