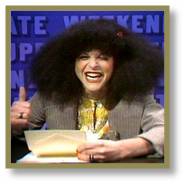 With apologies to and appreciation for the brilliance of Gilda Radner

From my point of view it means something very specific. Paying money for anything deemed luxury sets a level of expectation far above the norm. It  implies we have paid more to get more. This kind of advertising sets a standard that must be met.   We have a sense of anticipation when we shell out big bucks for something described as luxurious.

Last week my high school BFFs and I were in Myrtle Beach for our once-every-two-years, girls-gone-wild-week. It was a meticulously planned event and to ramp up our fun we rented a non-standard, ergo luxury, house on the water. We selected a rental agent that specialized in luxury accommodation with a further stipulation that theirs were non-party houses.  They promised us “service you expect from people you trust.”

When I see the word luxury I expect certain standards when I walk in the door:

The Lap of Luxury

The rental web site led us to believe we would be living in the lap of luxury in a beach-front house. The scene that greeted me when I opened the door can best be described as the aftermath of a college frat party that involved booze, BBQ and questionable activity that left large hand prints on the sliding glass doors.

The electricity was off and the smell of spoiling food left on counters, in the refrigerator and inside the oven was overpowering. If the carpet had been able to talk, we might have known exactly what went on in there.

I returned to the rental agency and expressed my disgust and unhappiness at the conditions in my luxury accommodation. The woman behind the desk remained impassive, and when I was finished said, “I’m sorry, we’ll send the cleaning crew out immediately”.  Future conversations with them would elicit replies such as “we’d be happy to call the ______” (fill in the blank) and “Really?  Nobody showed up?”.  My favorite is “we’ll have to explore some other options.”

Around 3:00 p.m. one woman (the crew) showed up and stood in the doorway, remarking it was the second-worst mess she’d seen in all her years of cleaning.  I felt we were off to a good start. She remained until 10 p.m., cleaning the top floor so we could move in.  She returned the next day, and the next…

The electricity was turned back on, activating the house alarm which went off for two days. Each time we called we were told “Verizon is on the way.”  On the second day we disabled it.

Eventually electricians, exterminators and carpet cleaners appeared. The ants marched out in a huff claiming they had been duped into thinking they had luxury accommodation and the roaches came back now and then to jeer at us.

It really was that bad. .

The house had electronics everywhere. Wall-mounted flat-screen TVs in every bedroom and the huge plasmas in the main living areas; part of a surround-sound system that included a stereo and DVD player hard-wired into ceiling-mounted speakers. Luxury.

We had a movie we wanted to watch, wine, snacks and a wide-open afternoon.  Twenty minutes later we were still trying to figure out how to watch the movie.  Nothing worked and nothing was connected the way it should be.

We found a drawer full of remote controls, also non-functioning and a large selection of choices on the plasma, none of which got us to the video option. Six college-educated adults (including two engineers) and none of us could figure this out. All part of the luxury plan. When we finally got it working we spent five minutes high-fiving each other and praising the brilliance of whomever it was that hit enough buttons to make it play. 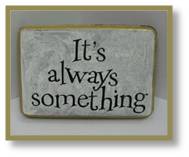 Eventually it all got sorted, we laughed about it (what else can you do?) drank more wine and negotiated a sizable refund on our rental. Did I mention one of the BFF’s is a lawyer?  You might be wondering why we didn’t move. We were together, and that was the point of the trip. We could have demanded a new house but it might not have been on the water, had bedrooms with en suite bathrooms or near other classmates who had also made the trip. Instead, we demanded the luxury we were promised.

The saving grace was a magnificent deck on the third floor, where we spent mornings with our coffee, afternoons with our wine and evenings watching the sun set over the water – all of them with each other. The luxury of being together, cooking meals, reminiscing and catching up on our lives was really what we paid for. That’s how we define luxury.

Well, that and the deck.