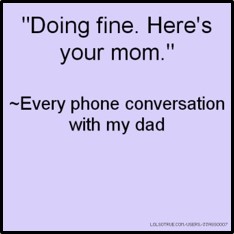 When I was younger Dad and I did not talk much. The matriarch of our family ran things like a Swiss watch and all communication passed through her. When she died, I had to develop a relationship with my Dad. We had to learn to talk with each other and we did that by talking about his past. These are still the best conversations I have with my Father.

He tells stories from his childhood, how he and my mother met, the life they had before children; and what he would do differently if he were raising those six children today.
Korea.

“If the best minds in the world had set out to find us the worst possible location in the world to fight this damnable war the unanimous choice would have been Korea.”
~ U.S. Secretary of State Dean Atchison

Today Dad and I are talking about the Korean War. Not his favorite topic, but I really want to hear about it. He talks about World War II with ease, but when I bring up Korea he always shakes his head. Dementia continues its slow and steady progression and I want to hear these stories before his memory of them fades. In this way, our conversations become a path from his past to the present.

Today I ask about Korea and he says, “It’s the least understood war in American history, it was really a battle about good versus evil.” He said the same thing about World War II.

Korea is called the Forgotten War. Almost 40,000 Americans died in action, and more than 100,000 were wounded. It came five years after World War II—t he war to end all wars. My Dad landed on Omaha Beach: he said he had seen the worst of war. He thought he was done.

He was in Japan when the 3rd Infantry Division (one of ten active divisions in the U.S. Army) shipped out to Seoul. 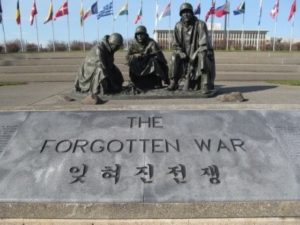 It was the first military action of The Cold War—another name for the political tension that remained when WWII ended.

The United Nations and the United States joined the war on the side of the South Koreans. Dad was assigned to the 3rd infantry Division and arrived in Korea in September of 1950.

But this isn’t what Dad talks about.

Dad remembers the weather and being cold. I don’t think of Korea as a cold place, but he assures me winters in Korea are cold and desolate. Summer is no better. The Monsoons come with rain so strong it washes away roads and bridges, creating rivers of mud and heat so stifling you can’t breathe. 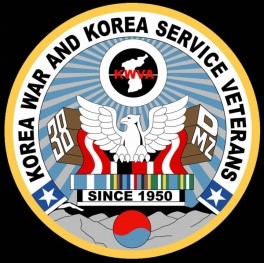 He talks about heavy, wet uniforms that won’t dry, especially his socks, and boots so swollen and caked with mud it’s hard to walk. The boots hurt, but you march on.

He remembers being in line in the mess tent, in full uniform. Ahead of him is a young soldier carrying his weapon incorrectly, with the safety off. He stumbles and his weapon discharges, fatally shooting the man behind him and in front of my dad. The man collapses. “What did you do?” I ask. “Nothing”, he says. “There was nothing I could do; he was dead. I stepped over him and got my dinner.”

Both my parents served in Korea. During our conversation Dad brings up my mom; recounting their attendance at the grand opening of the Bastogne Military War Museum (renovated and re-opened in 2014) when they lived in Belgium. My Dad was part of the American liberation of Bastogne under General Patton.

They walked through the displays, including an exhibit of U.S. military uniforms. As my parents studied the uniforms they once wore my father said “Helen, look at those boots—they’re wrong.” My mother stared and said “Those boots are from the Korean War. I can still feel them cutting into my ankles.”

The Korean War earned visibility through the 1970s television program M*A*S*H*, a portrayal of the fictional 4077th Mobile Army Surgical Hospital. It earned harsh criticism from both my parents. Dr. Otto Apel’s book “Mash: An Army Surgeon in Korea” is the historically accurate account. 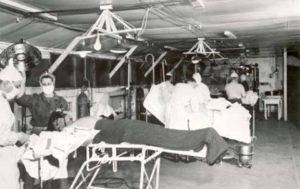 Mom was stationed in a real and much larger unit, the 8063rd, also called the 44th surgical hospital, established because the 400-bed Army evacuation hospital could not handle the magnitude of casualties.

The actual hospitals were much larger, and mobile, processing hundreds of patients every day. Dad said they utilized extreme blackout measures because North Koreans flew night missions and if they saw a light they dropped a bomb.

Both agreed the surgical detail, though glamorized for television, was accurate. They took issue with everything else—especially Alan Alda’s non-regulation haircut!

Dad never intended to make the Army a career, but he served proudly for 33 years, a soldier through and through. He remembers details with amazing clarity but with a certain detachment. He is factual, until I ask about the Battle of Pusan Perimeter. I have asked many times and today is no different. He will not talk about it. Maybe next time.
My Dad is ready for breakfast. We have enjoyed two cups of coffee and mini-cinnamon buns from the local Wal-Mart. It was a good way to start the day.

3 thoughts on “Conversations With My Father: The Korean War”