“Oh, when the sun beats down and burns the tar up on the roof,
And your shoes get so hot, you wish your tired feet were fireproof,
Under the boardwalk, down by the sea,
On a blanket with my baby is where I’ll be.”

Coney Island was America’s playground when Las Vegas was just a damp spot in the Mojave Desert. For New Yorkers it was a “five cent paradise” reached by a nickel trolley ride to the end of the line on a hot summer weekend. Once there, they could swim in the ocean or lie on the sand, stroll on the boardwalk or canoodle under it, go on wild and risqué rides, eat a hotdog or any of the many other foods on offer, watch the freak show, ogle the hootchee-kootchee dancers, or just take in the sights and glow in the lights.

This weekend we took a trip into that past when we drove to Hartford’s Wadsworth Athenaeum to take in their show, “Coney Island: Visions of an American Dreamland: 1861-2008” before it closes on May 31. First we did the lecture tour with an excellent docent and then went around again, seeing the exhibit in more detail.

From Idle to Idyll

It was a terrific show—worthy of its subject in both depth and quality. The Wadsworth describes it as including, “. . . more than 140 objects—paintings, drawings, photographs, prints, posters, architectural artifacts, and carousel animals—supplemented by ephemera and film clips.

This show was a real draw for me even though I didn’t grow up in New York. I love roller coasters and fairground art. I have also studied the art of the carousel and visited these wonderful pieces of mobile sculpture around the country. I have ridden carousels and have albums of photographs from different machines fashioned by a variety of carvers in many parts of the country. I also got to add another museum to my life list of art museums — and The Wadsworth is well worth visiting.

Organized in chronological order, the exhibit starts with nineteenth-century paintings of Coney Island when it was still just beach and you could actually see the sand. How did this idyllic scene turn into a honky-tonk amusement park? As usual, follow the money. Streetcar companies did a lively business during the week as people rode them to and from work, whether in offices, factories or the stock exchange. On weekends, however, the streetcars sat idle. Picnickers sometimes took them to the beach and the streetcar companies determined that they could increase this traffic by adding a few attractions at the end of the line like a carousel. The more attractions, the more riders, the more money. It’s a simple equation and Coney Island used it to grow bigger every year.

“From the park you hear the happy sound of a carousel
Umm, you can almost taste the hot dogs and French fries they sell.
Under the boardwalk, down by the sea
On a blanket with my baby is where I’ll be.” 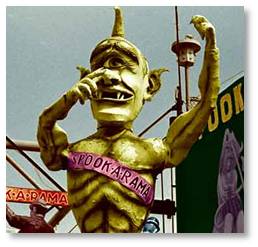 Cy the Cyclops in better days

The Coney Island Visions show depicts it all; not just photographs and paintings inspired by Coney Island but actual pieces of the park. There are painted canvas backdrops from the midway sideshows and the giant Cyclops head (nicknamed “Cy”) from the Spook-a-Rama ride—which might well have inspired the one-eyed, one-horned flying purple people eater. You’ll also see two carousel horses and a camel, a wheel of chance and several shooting gallery targets.

It’s the art that really stands out, however–not that those carousel animals aren’t great art. Right up front as you walk in is Joseph Stella’s amazing “Coney Island: Battle of Lights,” an abstract work that reflects the shapes, lights, and activities that a visitor experiences. It’s followed by paintings as rowdy and raucous as Coney Island itself, including several works by Reginald Marsh, who depicted the wild, fast (25 mph) steeplechase ride, several iconic pieces by Harry Roseland and a painting by Weegee from a photograph he took of the crowded beach.

You’ll also see film clips from a variety of movies including Alvy Singer (Woody Allen) trying to eat soup in his house under the Thunderbolt roller coaster. The only thing missing in the galleries @TheWadsworth is calliope music.

Coney Island On the Decline

We used to visit Coney Island when we lived in Brooklyn but it was on the decline. The sideshows and most of the rides—which were wilder and faster than anything that would operate now—had closed. Steeplechase Park and Luna Park had burned. The Parachute Jump’s tower still rose high over the midway but was inoperative. And while the Thunderbolt coaster still rolled it looked so rickety and dangerous I was never tempted to ride it. 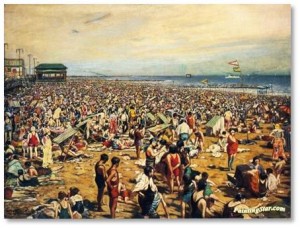 We’d grab a couple of hot dogs from Nathan’s Famous along with the best fries in the world and walk the boardwalk.  Sometimes Seth would try his baseball skill at the Bat-a-Way.

Once we visited with a friend and he talked us into sitting in the old photo booth. He sat down and we sat on each of his knees. The goal was to get your face in front of the camera when the light went off. I still have that strip of pictures in an album and it makes me laugh every time I look at it.

Memories of Back in the Day

We had a good time at the Wadsworth visiting the Coney Island that used to be and reviving memories of what we had known there. If you missed the exhibit in Hartford, try to catch it when it moves to other museums. Here’s the schedule for the show’s national tour:

“Under the Boardwalk” by the Drifters
Lyrics by Kenny Young, A. Resnick, and K. Young

NOTE: The show includes an archival film strip of how they murdered Topsy the elephant by electrocution for defending herself after an abusive trainer flicked a lit cigarette into her mouth. (She killed him and good for her.) It was difficult to watch, especially after reading Jodi Picoult’s excellent book “Leaving Time,” which deals extensively with elephant culture, familial connections and grieving behaviors. I recommend the book highly but you might want to skip the film.