Not everyone wants to go to college. Despite studies that show college graduates earning 56% more than those who don’t get a degree, college just doesn’t appeal to some. Many young people just want to get out there and start making their own way in the world. Others have dyslexia or ADD or some other syndrome that makes it difficult for them to sit quietly in a classroom or library.

The Cost of a College Degree

Many more just can’t afford it. A college degree has become prohibitively expensive. These young people face the quandary of loading themselves with tens of thousands of dollars in debt that will drag down their financial stability for decades.

If going to college just doesn’t fit into your life choices, here are two suggestions that might help you in the long run.

Think about going into healthcare. CareerCast has just issued their report on the best jobs without a four-year degree in 2017 and almost half are in the healthcare field. Plus, healthcare jobs will be difficult to automate for a long, long time. That means you don’t have to worry about a robot taking your job.

Here are the top 10 jobs for people who don’t have a four-year degree sorted by salary, from best to worst. As you can see, best salary doesn’t always match up to best growth prospects and vice versa: 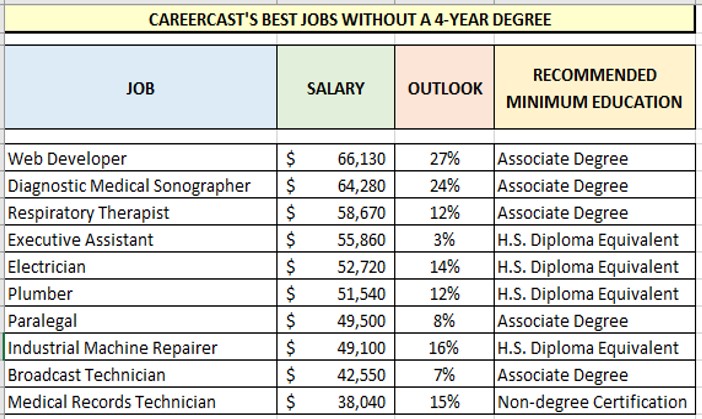 If you just want to sound smart, you can do that, too. Regional accents and how a person pronounces certain words affect the listener’s opinion of one’s intelligence. As Monica Torres tells us in Ladders, “Strangers Know Your Social Class in the First Seven Words You Say,” Americans tend to think this kind of class distinction is more British but, hey, we do it, too. 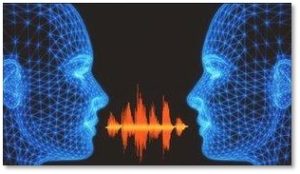 The problem is that we don’t always hear the regional accent or regional word usage ourselves. When my parents traveled to Hawaii, my mother was astonished to have someone in Honolulu peg her Massachusetts accent in one sentence.

You Can’t Hear Yourself

“But I don’t have an accent,” my mother said to me later. Hah. She had a SouthCoast Massachusetts accent you could cut with a knife. I can tell whether someone is from South Boston of Beacon Hill in seven words, especially if any of them includes an AR sound.

Southerners dismiss New England accents as harsh and honking, the speaker as unfriendly. Northerners, on the other hand, deduct about 25 IQ points from the speaker when we hear a southern accent but think they’re probably a nice person.

One of NPR’s commentators, Lakshmi Singh, began her job speaking with a regional Indian accent. I thought she sounded lovely, but a tad naïve. NPR sent her to speech school and now she sounds authoritative but as flat and neutral as the Midwest prairie. I miss that lilting, musical accent. 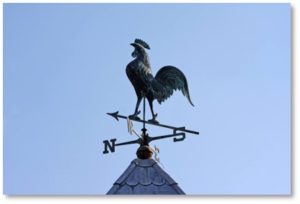 Many, many people these days speak with a lateral sibilant S speech pattern. This means they put an H in between S and T. They pronounce street as shtreet, stress as shtress, strident as shtrident, etc. it’s a mushy sound.

I used to do this until a college professor told me I had a lateral sibilant S. After that, I paid attention to what I said and found it relatively easy to eliminate the mush. But I hear it all the time on TV, radio and in the movies. Is it a regionalism? I don’t know.

If someone I am speaking to on the phone pronounces “ask” as “aks” I know he or she is black. Y’all, of course, says you’re from the south, as does referring to a woman as “dahlin.”. Calling everyone, even women, “guys” will tag you as from the north.

A speech class or two will cost you a lot less than a college degree and make an enormous difference in the assumptions people make about you, the opinions they form and their tendency to accept or reject you. How you say it can override the value of what you are saying — and you will never know it happened.

You may not go to college but you can speak as if you did.  It can help.