Courthouses have been in the news a lot lately so I thought it was time to talk about some of Boston’s justice buildings on Court Street. The City Hall Annex, which currently occupies Court Square, does not serve a judicial function but was built on a piece of land loaded with the history of law and its enforcement in Boston.

The Old Gaol on Queen Street

“The rust on the ponderous iron-work of its oaken door looked more antique than anything else in the New World …” – The Scarlet Letter, Nathanial Hawthorne 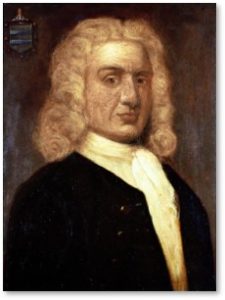 The plot of land on which the City Hall Annex is built, once held Boston’s Old Prison, the city’s first lockup. It stood close to both the center of trade and city government in the Town House, now the Old State House.

Opened in 1635, the Boston Gaol served as Massachusetts’s sole prison for   years. Eventually, the growing population made it essential to build local incarceration facilities elsewhere. At that point, it stood on a lane called Prison Street and that name lasted until 1708, when the larger road became known as Queen Street.

You would not have wanted to visit the old Boston Gaol. According to the Annals of King’s Chapel from the Puritan age of New England to the present day, Volume 1,

“The old stone gaol on Prison Lane [had] … outer walls … of stone three feet thick, its unglazed windows barred with iron, ‘the cells partitioned off with plank, the doors covered with iron spikes, the passage-ways like the dark valley of the shadow of death.'”

Captain William Kidd, who was either a pirate or a privateer set up for piracy, was incarcerated there in 1699 prior to his execution. The Puritans imprisoned both men and women for major crimes such as murder, rape, and piracy as well as smaller infringements such avoiding the mandatory church services, falling into debt, and servants disobeying their masters.

A new building replaced the first one in 1704 and that structure was damaged by Boston’s fire of 1711, which also destroyed the original Town House and the First Church. A brick prison, presumably fireproof, went up in 1754. 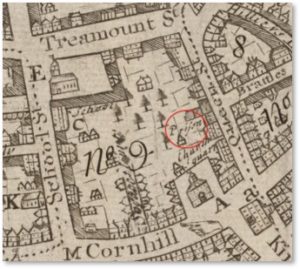 The jail site on Queen Street

Governor Sir Francis Bernard replaced this prison with a stone building in 1767, at which time a new brick courthouse was ordered. This was erected on Queen Street, occupying part of the land on which the jail had stood. Gov. Bernard’s three-story building with an octagonal cupola was replaced in 1810.

When this building was, in turn, taken down in 1823, some of its materials were used to construct the “gun house and ward room” on Thacher Street in Boston’s North End.

Whoever said they built things to last in the old days never read the history of Boston’s jails and courthouses. If we could see this transition played out visually, we would see a time-lapse film with buildings going up and down at regular intervals. 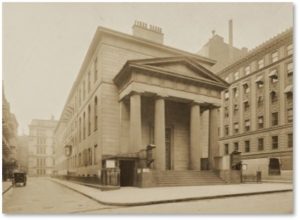 Boston built a more substantial granite courthouse from 1833 to 1836 designed by Solomon Willard in the Greek Revival Style. The four Doric columns of granite in its temple façade weighed 25 tons each.

The matching rear façade faced the back of the French Second Empire City Hall on School Street. This new Suffolk County Courthouse could be entered either from Court Street or the grandly named City Hall Avenue, an alley that runs between Old City Hall and the Niles Building. 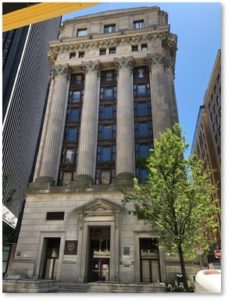 This substantial courthouse was, in turn, torn down in 1909 and was replaced by a building that served as an annex to the Old City Hall behind it. (A new Suffolk County Courthouse was built on Pemberton Square.) This 10-story granite structure, erected in 1912, was designed by Edward T.P. Graham in the Neoclassical Style with allegorical figures designed by Roger Noble Burnham.

Ever-thrifty Bostonians incorporated the eight columns from the old Suffolk County Courthouse into the new building. Mr. Graham stacked them atop one another to create four taller columns that rise from the third to the eighth floors. In the process, they changed the capitals from Doric to the more elaborate Corinthian. Additional Corinthian pilasters decorate the sides.

The City Hall Annex, a long, tall, and narrow granite building, stretches from Court Street all the way to the rear of what is now the Old City Hall on School Street.

When Boston’s municipal government transferred to its new brutalist concrete city hall in 1969, the annex became the headquarters of the Boston School Department, which later relocated to Roxbury’s Dudley Square. It currently houses unremarkable municipal offices and could be repurposed. 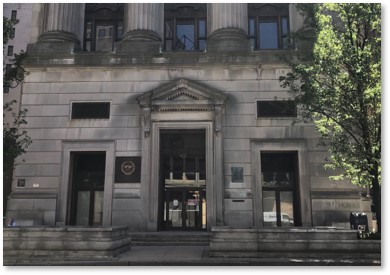