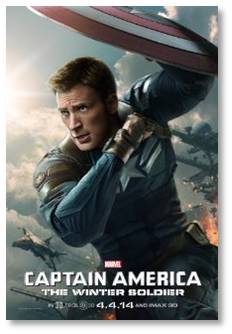 I guess that I ‘m still burned out on superhero movies because last weekend we saw #Captain America: The Winter Soldier and I was bored.

CA: TWS followed all the standard tropes and patterns of the superhero genre but it lost me shortly after Steve Rogers bailed out of a transport plane without a parachute. He does this for no discernible reason except that it gets him to the target faster, even though extra speed is not really necessary. And he does enter the water at the right angle for surviving a plunge from high places (feet first, body straight, leaning 10 degrees back). And, yes, he does get a lot accomplished, dispatching many ruthless pirates before the regular S.H.I.E.L.D. team shows up with their wimpy parachutes.

Really, though, it’s just showing off. “Oh, look. I can jump out of an airplane without a parachute and you can’t.” And it’s definitely not the kind of teamwork that makes elite units like the Navy SEALs or the Army Rangers work so well. I think that a director who’s going to make a movie that involves any branch of the military should be forced to go through boot camp before walking onto the set.

There are occasional bursts of real-life drama and conversation in CA: TWS, although not enough for me. And there’s humor, although not nearly enough for me. In between these scenes of people acting like normal human beings there are the obligatory fight scenes: with weapons or without, mano-a-mano, mano-a–machine, or mano-a-superhero. These scenes also follow the standard formula for these movies:

None of this has any visible effect on any of the people involved. Whether ordinary bad guy, psychopath, misunderstood nerd, Bond megalomaniac, or damaged person, the villains in superhero movies wreak devastation without a hint of remorse. OK, they’re villains; what do I expect? But the good guys and superheroes are exactly the same. Steve Rogers is a good guy so he tries not to kill anyone unless absolutely necessary. I appreciate that. But even tough, trained soldiers suffer guilt or remorse about what they have been forced to do in combat. They don’t, unfortunately for many of our deployed soldiers, just go blithely on with their lives. 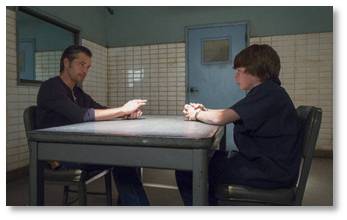 Raylan talks about killing a pig

I know, I know, this is a movie, not reality and people don’t go to superhero movies to feel bad. But last night on Justified, I watched Raylan Givens talk to a suspect about the impact it had on him when, as a boy, Raylan’s father made him kill something for the first time.

Even though the victim was a feral pig that was rooting out crops, killing it—taking its life—shocked the young Raylan. It was a powerful scene and Raylan’s admission that he vomited afterward was much stronger and more dramatic than the typical Hollywood vision of someone killing a man and then walking away without a second thought. (Which is what Raylan does now.)

By the end of Captain America: The Winter Solider, I felt as bludgeoned and damaged as many of the characters. During the big “save the world” scene at the end, I found myself disengaged and not really worried about whether Captain America and the uncorrupted members of S.H.I.E.L.D. would save the day. Instead I thought about the death and destruction raining down on the city of Washington D.C. I thought about people dying from falling debris and crashing “helicarriers.” I considered the impact on the nation’s capital and how the destruction would affect the government. I thought about what would happen when those very heavy “helicarriers” fell into the soft tidal land of Foggy Bottom. I even wondered how many insurance companies would go bankrupt from the damage. These are not thoughts that directors want audiences to have during the big climax. 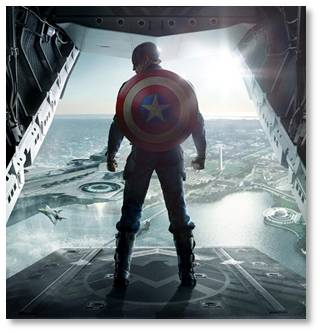 Who needs a parachute?

To be fair, CA: TWS got good reviews from nearly all the critics so maybe this is just me. As an older woman, I’m not exactly the fanboy target audience, after all. The movie had an 89% Fresh score from the critics on the Tomatometer and 95% of audiences Liked it. And I do like to to root for Sudbury homeboy Chris Evans.

I also enjoy science fiction and action movies, though, so maybe I’m just weary of the whole superhero formula. It’s just too, well, formulaic. Too predictable, too 2-dimensional, (even though we saw it in 3-D) too Perils of Pauline on steroids.

One thing is certain: superhero movies make super bucks. Captain America: The Winter Soldier brought in $96.2 million domestically in its opening weekend. This exceeded the $65.1 million that the original Captain America grossed in North America during its opening weekend in 2011. It also brought in $107.1 million in 50 foreign markets and now has racked up $207.1 million internationally after only 10 days. With an estimated production budget of $170 million, it has already earned back its cost and then some. When it comes to the movies, nothing succeeds like excess.

If you like superhero movies, by all means go see Captain America: The Winter Soldier. You’ll love it as much as the critics did. If not, you’re not going to see it anyway. Meanwhile, I’m looking forward to something a little quieter, more dramatic, less explosive and more engaging. I’ll let you know when I find it.

BTW: There are two Easter Eggs embedded in the credits. You might want to hang around.