The second section of this multi-part blog post stopped after three commercial brick buildings. I have decided, however, to extend the series one more time to encompass 176 Boylston Street and Poe Square. That makes this the third of four posts. 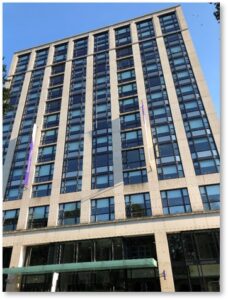 Last week’s post takes us to Emerson College’s Piano Row Building. Constructed as an apartment building, this 14-story structure now includes a residence hall, the Max Mutchnik Campus Center and the Brown-Plofker Gym. It has a white stone façade and blue-tinted windows.

This 20th-century building replaces some of the original Piano Row businesses, including the Mason and Hamlin Building. The structure has little architectural significance or interest. Moving on.

This structure encompasses the last piano showroom on Piano Row—now empty—plus offices and an abandoned underground concert hall that is one of Boston’s mysterious places.. 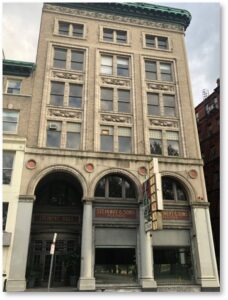 Steinert and Son was founded by Morris Steinert, an immigrant from Bavaria, in 1860. He came to Boston by way of Georgia, Connecticut, and Rhode Island. Mr. Steinert opened the Steinway store on Boylston Street in 1896 as the official agent for Steinway and Sons pianos.

The six-story structure, designed for the Steinert business by Winslow and Wetherell, is made of brick with a façade of Indiana limestone in the Beaux Arts style. It has four terra-cotta medallions, a copper cornice above a dentil course, and a carved frieze.

There are two columns and three arches at street level plus pilasters at each corner. Swags with musical instruments decorate the spaces between windows on the third and fourth floors.

The Steinert and Son company, remains the world’s oldest dealer of Steinway and Sons pianos. It once displayed gleaming grand pianos in its Boylston Street showroom, which now presents empty windows to Boylston Street. The company sold many of its possessions in a 2015 auction. It moved the showroom to Park Square temporarily and now has locations at 28 Damrell Street in South Boston (by appointment) and 1069 Washington Street in Newton (open to the public). Its South Boston show floor includes a mini-museum of historic artifacts, artwork and photography on the company. 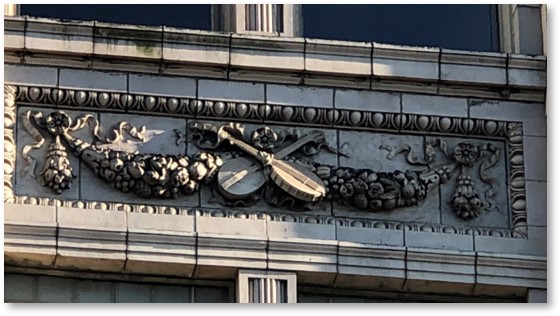 The left arch of the Piano Row building has a recessed entrance labeled Steinert Hall. This marks the door to a beautiful concert hall with near-perfect acoustics that hasn’t seen a performance in 80 years. 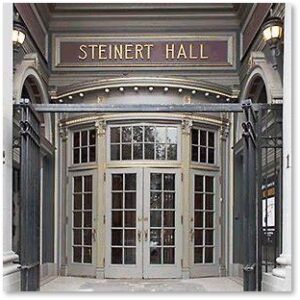 Alexander Steinert, son of the founder, built the hall as a place in which the company’s products could be demonstrated to best advantage. He wanted to create a sound-proof concert hall where no outside noises would interrupt or distract from the performances.

Achieving this took some original thinking as neighboring Boylston Street was then (and still is) very noisy. The only way to soundproof the hall was to put it 35 feet underground, some two to four floors beneath the store. (I have never understood, however, how this dealt with the noise from the subway running under Boylston Street.) 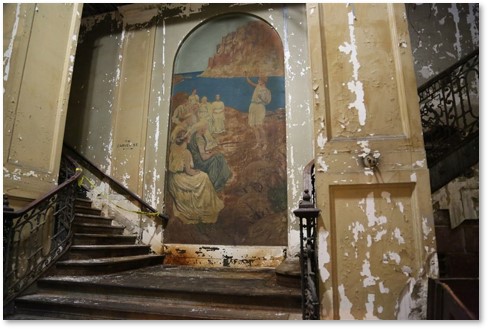 The elliptical Hall was decorated in an Italian Renaissance style, with a paneled seven-foot dado around the walls. Above this were six panels (still extant), three on each side, bearing the names of Bach, Mozart, and Schubert, and on the left Schumann, Beethoven, and Haydn. In its day, Steinert Hall played host to many great composers and musicians.

Everything changed in 1942 after the Cocoanut Grove fire on nearby Piedmont Street which killed 492 people in 30 minutes. That disaster changed many things, including fire codes here in Boston and around the country. The new Boston fire codes required more exits from from the underground hall, which could easily have become a fire trap with a higher fatality count.

Unable to afford these renovations, the hall’s owners closed its doors and they have remained shut ever since. The hall has been used for storage of boxes and other objects—including old pianos and toilets. Despite a sign right on the street, many Bostonians have never heard of Steinert Hall unless by rumor or hearsay. Even if they know of it, they have no idea where it is.

While its exterior entrance is in good condition, the hall itself has fallen into decrepitude. Plans to renovate the hall were announced by B Minor LLC in 2015, and expected to take 15 to 18 months. After much ballyhoo, however, nothing happened,. 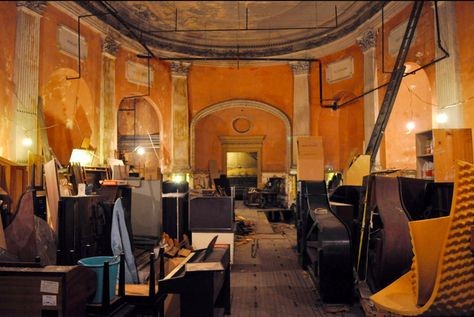 The current location, while interesting, is untenable and will remain so. Not only does the hall have fire code problems, it also sits below the water table. This makes it damp—bad for pianos, bad for plaster, bad for paintings, and bad for environmental control. My personal belief is that the only way to save Steinert Hall is to re-construct it elsewhere, then remove the architectural and artistic elements and renovate them.

Such a reconstruction would be a massive undertaking, of course, but if we have the technology to move the whole Egyptian Temple of Abu Simbel, surely, we can reconstruct one theater. And it beats abandoning an acoustic masterpiece forever.

As for funding, well, Emerson College’s alumni include Jay Leno, Henry Winkler, Denis Leary, Norman Lear, the Wachowski siblings, Michael Nouri, and Maria Menounos. Billionaires like Jeff Bezos could do it out of petty change.

From Pianos to Condos 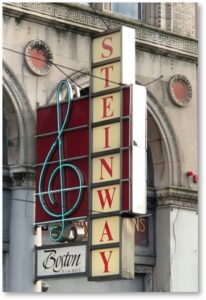 Unfortunately, the Steinert Building is the one of the few structures on Piano Row not owned by Emerson College.

In February of this year, Thibault Development purchased the building, with the goal of converting the upper floors to condominiums while retaining retail space on the first floor. Imagine the view residents would have of Boston Common and the Public Garden. The company did not announce any plans for Steinert Hall. I lead tour groups past this building every Saturday night, though, and have seen no signs of either construction or renovation.

The Steinert Building remains empty and quiet—and that’s the part above ground. One wonders if future condominium owners will hear ghostly piano music at night when Boylston Street quiets down.

Many people have written about and photographed Steinert Hall. I lack the time and the space to duplicate their excellent work. To learn more—and see photos of the hall—use the links below.