Many Bostonians know Arch Street in the Financial District because they go to Catholic services at the Shrine of St. Anthony, popularly known as the Arch Street Chapel. They may wonder why the street is named after an arch when it makes a straight line between Summer Street and Franklin Street.

The answer lies in the curve of Franklin Street. For an explanation, we go back to Charles Bulfinch, the visionary “gentleman’s architect” who left his mark all over Boston, even in places that no longer exist.

A Project Ahead of Its Time

The story begins with Franklin Place,16 joined houses that Mr. Bulfinch designed on the south side of Franklin Street. He based his design on the Royal Crescent in Bath, England, which he had seen and admired during his Grand Tour of Europe. 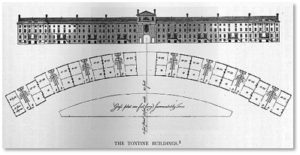 At the time, the area now in the Financial District was just a swampy lot. Mr. Bulfinch designed a curved residential street with matching crescents facing each other across an elliptical park in the center. It was a bold design and an ambitious project. It set the standard for other city projects like Louisburg Square on Beacon Hill and Pemberton Square.

No Head for Business

Unfortunately, Mr. Bulfinch began construction with less than half of the financing he needed and he was already deep in debt. It has been argued that Franklin Place was a project ahead of its time. His love of Franklin Place and his determination to finish it, at any cost, ruined him and his family.

Lacking the financing needed for the full elliptical design, Mr. Bulfinch was forced to straighten the north side of the street. This revision created a half-moon-shaped street with a tiny half-oval park in the center. He replaced the second set of row houses on the south side with four double houses.

The Central Pavilion and Arch Street 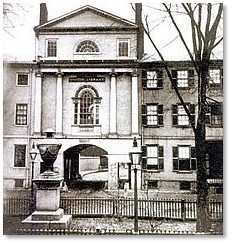 The central pavilion of Franklin Place

Franklin Place’s structures went up between 1793 and 1795 in a 480-foot curve. The 16 houses spread out from a central pavilion of neo-classical design. This pavilion, which gave a focus to the development, was based on London’s Adelphi Terrace, with two Ionic pilasters and two Ionic columns.

A large arched passageway opened on the ground floor. People and carriages passed through this arch to go through to Summer Street. The city widened Arch Street after the pavilion was completed to match the pavilion’s arch.

Elegant Housing for the Fashionable 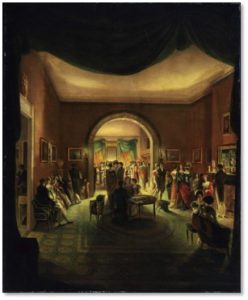 The Tea Party by Henry Sargent

The eight three-story, brick row houses, each 27 feet wide, stretching on either side of the pavilion, provided elegant housing for Boston’s fashionable elite. Mr. Bulfinch had them painted gray to emulate the Portland Stone of the original crescent in Bath, with white wood decorative elements.

“The development, sometimes called the Tontine Crescent, was a landmark in Boston’s urban planning. Here, as much as anyplace, row-house Boston began; Boston of town house, park and city palace became the ideal.”

Several notable Bostonians lived in Franklin Place, including the artist Henry Sargent, who painted two pictures of dinner parties in his home. Both reside in the collection of the Boston Museum of Fine Arts and can be seen in Gallery 121.

Two things doomed Franklin Place. One was a preference among Bostonians of substance for freestanding homes with side yards, even small ones. That made the four freestanding houses more valuable than the town houses. Second, progress came to the area as it does in all cities. Wealthy people moved to newer, more fashionable parts of Boston, such as Beacon Hill. Although Mr. Bulfinch considered Franklin Place to be his architectural masterpiece, it never does to be too far out ahead of public taste.

The elegant single-family homes were converted to boarding houses. The neighborhood declined. The city acquired Franklin Place and adjoining houses “for the public convenience” and demolished them in 1858. A business block of Gridley J. F. Bryant’s four-story granite commercial buildings and stores replaced it.

Remains of the Tontine Crescent

These were, in turn, destroyed by the Great Fire of 1872. Now Franklin Street is lined with newer commercial buildings and the only trace of Mr., Bulfinch’s project can be found in the curve of the street and a plaque on the corner of Franklin and Hawley streets.

Except, of course, for the row houses and city squares that Franklin Place inspired. And the echo of Arch Street in the Kirstein Business Library.

The Kirstein Library and Arch Street

If you would like to know what Franklin Place looked like, you can see a replica of the central pavilion’s façade nearby in a small pedestrian alley called City Hall Avenue. Putnam and Cox modeled the exterior of the Kirstein Business Branch of the Boston Public Library (1929 – 30) modeled on Franklin Place.

The red brick building incorporates all of Mr. Bulfinch’s design elements, including the ground-floor arch, the large Palladian window bracketed by columns and pilasters, and the fanlight with spider-web muntins on the third floor. The design was intended to echo Franklin Place because the pavilion housed the very beginning of the Boston Public library system. 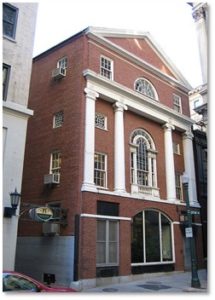 The Kirstein Business Branch takes the name of Filenes chairman Louis E. Kirstein, who donated it to the City of Boston. It once housed business-related materials that many people used to research stocks and business opportunities as well as gain the knowledge to start a new business. Its patrons considered it the place to go in the days before one could access financial information on the internet. I went there several times to research corporate annual reports for job searches.

The Kirstein Business Branch closed in 2009 and its collection moved to larger digs at the BPL’s central library in Copley Square, along with most of Mr. Kirstein’s $6.8 million endowment. The building has been empty since then and looks distinctly forlorn. It would be a shame if this library, with its beautiful interior woodwork, went the way of Franklin Place. 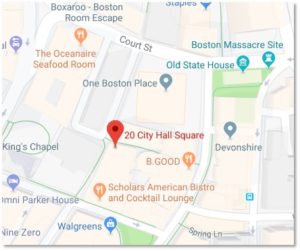 To find the old Kirstein Library with its replica of Franklin Place, stand on School Street and look to the right of the Old City Hall building. You will see an alley—that’s City Hall Avenue. Walk down it until you get to Court Square. Look right.

Number 20 is the old library. If you step back to the north end of Court Square, you will get a good view of the façade. A window fills the arch of this building and you can look inside to get a glimpse of the wonderful craftsmanship

Through it all, Arch Street remains and now you know how it got its name.