I have written before about why you should know what ingredients are in the processed or packaged food you bring home from the supermarket. But I really didn’t pay much attention to news stories about a whisky called Fireball being recalled from European shelves. Because we don’t drink whisky (just don’t like the taste or the feeling) this information didn’t register with me as a food issue. Boy, was I wrong!

It turns out that this low-alcohol, cinnamon-flavored liquor has propylene glycol one of its ingredients. This is the same substance that is used in antifreeze and de-icing agents, only the Fireball version is “pharmaceutical grade” not “industrial grade.” Terrific. What’s the difference?  Well, the former is used in food and “handled according to stricter standards.” OK, that takes care of the handling, but what about the impact on the body?

The Food and Drug Administration, which is supposed to protect the American public from unsafe food and additives, has designated propylene glycol as “generally recognized as safe (GRAS).” This designation means that that a chemical or substance added to food is considered safe by experts. That exempts the substance, from the usual food additive tolerance requirements Federal Food, Drug, and Cosmetic Act (FFDCA).  Who are those “experts?” Who knows? They’re probably scientists and lawyers paid by the manufacturers to give their products a pass.

Does that mean propylene glycol is really safe?  According to the Agency for Toxic Substances and Disease Registry, “Propylene glycol rarely causes toxic effects, and then only under very unusual circumstances.”  Europeans don’t like the odds on this, however. Norway, Sweden, and Finland have recalled Fireball whisky—because the company inadvertently shipped the North American formula, which contains more propylene glycol than is approved for consumption in Europe.

Another point of interest is that Fireball whisky is popular among college students for its sweet, cinnamon flavor. That tells me two things:

By now you’re thinking—as I did—no problem! I never touch Fireball whisky. Well, guess what?  Propylene glycol is used as an additive in lots of other packaged and process foods that are probably sitting on your pantry shelf because:

Propylene glycol gives us yet another reason to read food labels. While we depend on the FDA to protect us, Europe actually enforces tighter regulations on ingredients used in foods sold there. I guess their experts don’t agree with our experts on what can be recognized as safe. That means we ingest a variety of substances that are banned in other countries around the world. We sometimes get alerted to problems when foods are banned from the shelves there. Cases in point:

It’s Hiding in Your Kitchen

Getting back to propylene glycol, here’s where you’re likely to find it outside a bottle of whisky:

Do you trust the experts on what’s safe to put in your body?  If so, great. Don’t bother with those pesky labels and just pile those boxes in your shopping cart. Good luck with that. 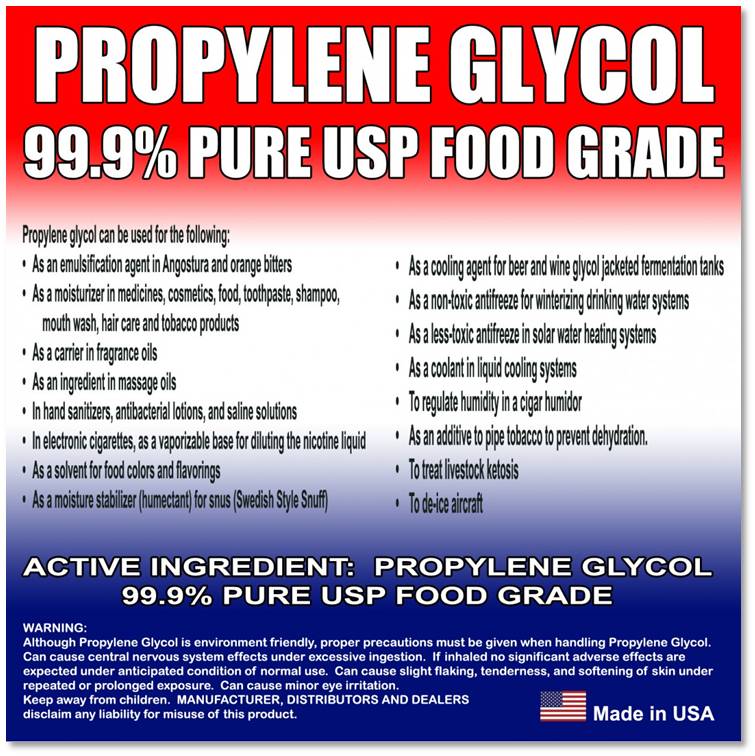 Read it and be warned

If not, though, you can take a few simple precautions: