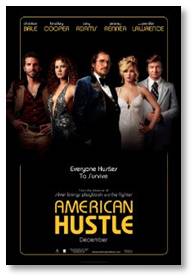 What to say about this movie? It’s everything the critics say it is—and less.

American Hustle is set in 1970s New York and New Jersey and does a terrific job—with one exception—of reflecting that period. It was a time of big cars and big hair, creeping seediness and tawdry surroundings. Although national politics play no part in Hustle, it depicts the malaise that gripped a country struggling with the Vietnam War and trying to recover from three shocking assassinations. I lived in New York in the early seventies and what I remember most is noise, dirt, crowds, and ubiquitous graffiti. We all struggled to fight the crowds, get through the day, and build a life when the odds–and the city–were never in our favor.

The characters in American Hustle are all fighting to make it, to break through, to scrabble up to that next step, to end up better off than they started. They don’t think big—not really big, not Bernie Madoff or Michael Milken big. I wanted to support them in their struggle, but they aren’t the kind of people that I could find sympathy for, empathize with, or root for. This crowd is comprised of small-time con men and women, politicians who put a thin veneer of public service on their personal greed, bureaucrats afraid to break the rules, and wives fighting for control in a relationship where they have no power. They are smaller than life and offer few redeeming features. The bottom line is that I didn’t like anyone and even the few good guys end up screwed. That left me cold as I exited the theater. 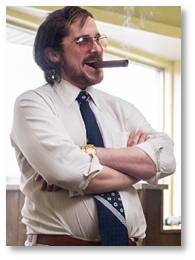 This is not Batman

The cast is stellar, however, and they give performances of amazing subtlety and depth. Christian Bale reverses the recent trend of using severe weight loss to fit a role and turns himself into a fat, balding mess of a man. It’s as hard to see Batman in this character as it was to see Magic Mike in Matthew McConaughey’s Ron Woodruff. Jennifer Lawrence is both fun to watch and tragic. Her declaration that, “I’m not stupid” is like Richard Nixon saying, “I am not a crook.” Well, yeah, if you have to deny it, you are.

I have been a big fan of Jennifer Lawrence since her astonishingly powerful lead role in Winter’s Bone, a movie for which she learned to skin squirrels, chop wood, and fight. Her portrayal of Ree Dolly, an Ozarks teenager struggling to keep her family together in the face of parental abandonment and neglect was so strong that for a while I rooted as much for the role as for the actress. She has already won an Academy Award for Silver Linings Playbook and I predict that more awards will be coming as she grows and extends her range.

A Movie with No Heart

My big problem with American Hustle is that, while it is very well done in most regards, it has no heart. Ann Hornaday in her Washington Post review, claims that the film has, “a heart of pure, if slightly tarnished, gold.” I disagree. These characters are difficult, unpleasant, and amoral. They are also sad, tragic, weary, desperate, fearful, and not all that bright. That’s not a group I would choose to hang out with in real life. There’s nothing inspirational or even particularly likable about them. Unlike Silver Linings Playbook, I enjoyed this movie but just couldn’t get behind it.

At a party on Christmas Eve, I had a discussion about this issue with several other film buffs. They certainly didn’t feel that it was necessary to empathize or sympathize with characters in order to like the movie. Yet on Rotten Tomatoes, 94% of critics rated it Certified Fresh vs. 84% of the audience Liking it. Those are very good scores, but they skew towards artistry over likability. 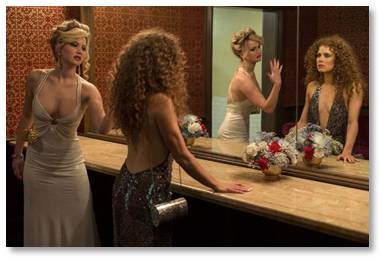 I recommend American Hustle for grownups who enjoy a sort-of comedy of manners with sometimes witty dialog and overall great performances.

NOTE: The one period detail David O. Russell didn’t get right concerns the women’s dress. Both Amy Adams and Jennifer Lawrence spend significant parts of American Hustle draped in slinky Halston dresses with cleavage to the waist but without benefit of underwear or hose. (Maybe that’s why the movie left me cold.)

In the Seventies, women did not go around barelegged. Pantyhose were essential to a respectable woman’s appearance and no one went out without them. A woman who walked the streets barelegged, as these characters do, would have been advertising their profession—and that profession wouldn’t have been housewife.