Last week my youngest sister came for a visit and it was just the two of us. There have been gatherings, but always with other siblings and friends, so this visit is special. 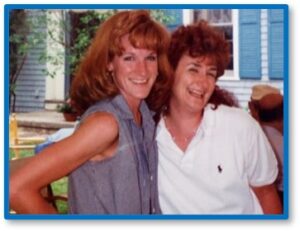 Susanne (right) and her sister

Our parents are both gone. We laugh and say we are orphans now, but it’s true. Our memories are all we have, so we spend time talking about the past, remembering what it was like being military brats in a big family.

The most revealing discussions we have center on our age difference. I am the oldest, she is the youngest; separated by just over ten years. As we travel down memory lane, we discover some starkly different recollections.

One thing we agree on is simpler times. Growing up in a big family means equality without privilege. We were not spoiled; all of us held to the high standards imposed in a military family.

If I had to summarize our childhood, I’d say we lived simply but well. We moved a lot, made new friends easily and never left the house without making our bed. Early childhood for us meant learning to adapt. Mom was the principal source of law enforcement with Dad as backup for more serious offenses.

We acknowledge the amazing opportunities we were given and how much we benefitted from our international and cultural exposure. We left home with a solid foundation under us.

Where we differ is in our memories – I left home when my sister was eight years old. We sit by the pool with our iced tea and realize she had one set of parents while I had another, yet they were the same people.

Her childhood differs from mine. Being the baby in the family means she was last in line for many things, including my parent’s energy and attention.

The Child at The End of The Line

My sister was born just 13 months after my sister Angela, who has Down Syndrome. Two children under two is challenging for any parent, but my mother had three children under four years old.

The sixties defined itself with the Beatles, the assassination of President John Kennedy and the discovery that Down Syndrome is a genetic disorder. Prior to 1960 most children born with this condition were placed in institutions at birth. My parents had limited resources and no support groups. They learned as they went, and likely wrote the books on how to do it right.

As the oldest child I had my parents’ undivided attention until I was three and my brother arrived. First in line means a lot in a large family. My sister was last in line and an Irish Triplet. She was lumped into group parenting and left to figure stuff out on her own.

Comparing notes from childhood experiences often leads to unexpected places. I always assumed my parents were less strict with my sister. By the time she was born they had been worn down by four other kids. It seemed logical to assume her path would be easier because I blazed the trail for all of them, right? 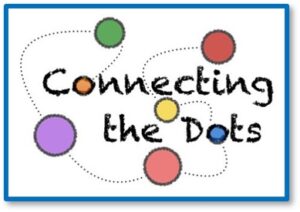 But I never gave it any thought. I was gone, pursuing education, romance, and the independence one dreams of at 18. I returned for her high school graduation and her wedding. We never talked about what it was like for her, growing up as the child who came after the child with special needs.

Talking with my sister now is a big adjustment to my fifty-year-old perspective. How could I have gotten it so wrong? She was pushed aside because she was sweet, calm, smart and normal. My parents gave their time, energy and attention to the one child they felt needed it, failing to see they all needed it.

My sister got the foundation, but not the encouragement, feedback and confidence she deserved.

You can’t rewrite history. I entertain visions of being a better big sister; one worthy of the title. It’s hard to put my finger on exactly what it is I could have done, but I’m convinced I failed her in some way.

Big sisters are mentors and keepers of secrets. We are supposed to be the lender of clothes, the emotional support beam and the Wiki of teenage angst, full of knowledge and advise.

Our age difference and my departure somehow took that off the table. It shouldn’t have and looking back I see that so clearly. But she married young and began her own life and we found ourselves traveling in different directions.

We stayed in touch and attended family gatherings but individual visits were few and far between. When her marriage ended, I made myself a promise to step up. I went for a visit and we both realized she was all grown up!

By then she had found her stride, earning her master’s degree in clinical social work and meeting a wonderful new man she eventually married.

If life has taught me anything it is to let go of the past. Celebrate what is good and make new memories. You will not re-create what you used to have, but you just might find something better. 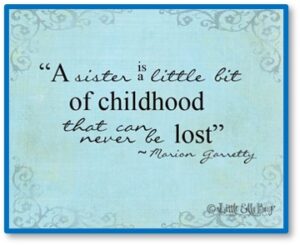 During our visit I realize I’m always going to be the big sister and honored to have her as my little sister. That knowledge reminds me It’s never too late to be the sister you could have been. We are more alike than different and we genuinely care about each other.

Our love of cooking, preferred style of clothing and dog-with-a-bone determination to find the lowest price on any item has genetic roots. We remember our mom being the same way, and it makes us laugh.

Technology and love connect us every day until the next visit.

1 thought on “A Visit with My Sister”