The spring shoulder season might not offer much in the way of top-flight movies but occasionally some good things sneak in. Because the summer openings are dedicated more and more to superheroes, disaster movies, and special effects extravaganzas, the quieter and more thoughtful films get pushed out. It’s hard to look past the glare of Batman vs. Superman but keep your eyes open and you can find a few things worth seeing.

In our case, we have found three good movies recently. All are under-promoted and underrated but have high Tomatometer scores. The films on this 3-movie scoreboard appeal to different audiences but are well worth seeing. In chronological order of when we (or I) saw them, here are three recommendations.

The small film was produced so under the radar it was a secret and hit the theaters abruptly as a big surprise. Here’s the premise:

“After getting in a car accident, a woman is held in a shelter with two men, who claim the outside world is affected by a widespread chemical attack.” 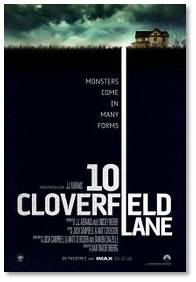 Well, it’s a bit more complicated than that but for two thirds of this movie the viewer is held in suspense. Has the protagonist been abducted by a crazed survivalist or is something really terrible going on outside the bunker? Is John Goodman’s Howard a truly scary dude or a protective father figure? Is he telling the truth or is he lying through his teeth? it’s a see-saw that continually pivots back and forth.

Screenwriters Josh Campbell, Matthew Steucken, and Damien Chazelle keep you guessing and Director Dan Trachtenberg plays the tension like a musical instrument, moving from surprise to shock, from challenge to frustration and from triumph to disaster and back again.

The title plays off the 2008 movie “Cloverfield” and both had J.J. Abrams as a producer so as you try and figure out what’s going on you lean more toward aliens than psychopaths. But I’m not going to tell you the ending. I will only say that it doesn’t disappoint.

If you like suspense and dramatic tension and good writing . . . if you like good acting and a well-written script . . . if you enjoy suspending disbelief . . . then don’t miss 10 Cloverfield Lane.

Eye in the Sky

This is an excellent movie and it’s a real shame that it has been so overshadowed by lesser, but louder, films. The premise:

“Col. Katherine Powell, a military officer in command of an operation to capture terrorists in Kenya, sees her mission escalate when a girl enters the kill zone triggering an international dispute over the implications of modern warfare.” 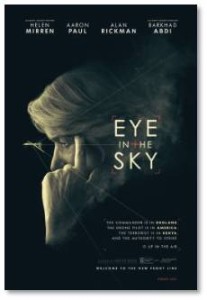 That description doesn’t sound particularly gripping but let me assure you that you will be engrossed in this story from beginning to end. Eye in the Sky is where war meets polities, self interest trumps doing one’s duty and the needs of the many are held in jeopardy for the safety of one. Passing the buck becomes a fine art in this screenplay by Guy Hibbert and Director Gavin Hood balances the military requirements against the human heart, swinging back and forth in a subtle pivot that keeps the viewer on the edge of the seat.

It doesn’t hurt at all that Col. Powell is played by the always-excellent Helen Mirren and Alan Rickman, in his final role, has the best lines in the movie. Other outstanding cast members are Iain Glenn (Ser Jorah Mormont), Aaron Paul, and Jeremy Northam.

This is not a blood-and-guts war movie or a “let’s blow sh*t up” action flick. Even if you’re not a fan of war movies, though, you’ll be happy you signed up to watch Eye in the Sky.

Hello, My Name is Doris

I went to see this with my friend, Alane, because my husband wasn’t interested in a chick flick. Well, it was his loss. I can’t recommend this movie highly enough.  The premise:

“A self-help seminar inspires a sixty-something woman to romantically pursue her younger co-worker.” 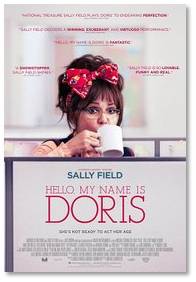 That’s not how I would have described this gem of movie that’s as retiring and unassuming as its protagonist, played by Sally Field. I would have said, “An older woman so set in her ways she lives in the fifties is forced to confront the need to change her life.” Both descriptions are right, of course, but this is not a meet-cute rom-com where true love wins out despite a massive difference in age. It’s something much more complex—and far more challenging—than that.

Is “Doris” funny? Yes, in places it is while in other’s it’s tragic. We root for Doris at the same time we’re appalled by her dress, her hair, her hoarder-in-training mentality and her tendency to rush headlong into seeming disaster.  I laughed one minute and then groaned, “No, don’t do it!” in the next. I loved every minute.

Sally Fields’s performance is Oscar-worthy and beyond. This is truly an acting tour de force and the movie is worth seeing for that alone. It’s a crime that “Hello, My Name is Doris” came out in April because Sally Fields deserves a Best Actress nomination but probably won’t get one. By the time the studios release their Big Gun Oscar Contenders in December, her performance will be a distant memory.  So will Tyne Daly’s supporting role as Roz, which is also strong.

Chick flick? Probably. But it’s an excellent movie nonetheless. Go see it before it’s gone! In fact, go see it while your husband / significant other wastes his time with Batman vs.Superman or the kids are zoned in on Zootopia. You’ll see a much better, more grown-up and more rewarding movie.