We saw Wonder Woman this weekend despite the fact that I wasn’t planning to go. After the over-the-top ending of Guardians of the Galaxy Vol. 2 I wasn’t in the mood for another slam-bang-whomp superhero movie, regardless of who was wearing the spandex suit.

But we saw it anyway and I was pleasantly surprised. 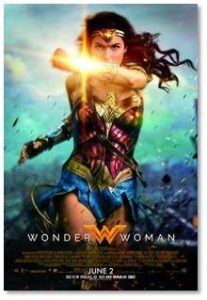 First, because the story focused more on people, challenges, and human triumphs than on brute force and wanton destruction.

Second, because the villain wasn’t the evil offspring of SPECTRE. but our actual enemy in World War I. That put any fighting in the context of an authentic conflict against an historical adversary. it also made the violence more real and direct.

Third, because Diana Prince has a mind of her own and doesn’t need to flirt or seduce men to get what she needs. So she doesn’t have to dress up like a pole dancer, a whore, or a slut—scenes that are all too common in movies directed by men for fanboys. In fact, she pretty much ignored men’s expectations—or didn’t even know they existed. Her outfit is what she always wears, not a costume for male approval.

Fourth, because she moves like a strong, physical. person. Gal Gadot was a combat instructor in the Israeli Defense Force and it shows. Plus she has a real woman’s body, not an anorexic stick figure. She runs, jumps, lands, climbs and fights like a man would, with power and force. This is a real treat after seeing so many emaciated women dressed in miniskirts or leather pants and boots trying to run in high heels.

Wonder Woman scored a huge box-office success in its opening weekend, which kind of put a stick in the eye of the big conflicts swirling around it.

Critics succeeded in removing Ms. Gadot as the Honorary Ambassador of the United Nations for the Empowerment of Women and Girls because Wonder Woman is a “large-breasted woman of impossible proportions.”  Plus, you can see those proportions because she’s not wearing, you know, a chador.

“There are so many horrible things that are going on in the world, and this is what you’re protesting, seriously? When people argue that Wonder Woman should ‘cover up,’ I don’t quite get it. They say, ‘If she’s smart and strong, she can’t also be sexy.’ That’s not fair. Why can’t she be all of the above?”

Ms. Gadot is an outspoken supporter of Israel and the rights of women worldwide. You go, girl.

USA Today has the best take on the feminism in Wonder Woman. Spoiler alert: read this article only after you have seen Wonder Woman. Note: Only one person has a nude scene in the movie and it’s not her.

So here’s my advice. Forget all the politics and just enjoy the movie. It’s good entertainment, it pokes fun at a lot of societal expectations, and it gives us an excellent role model: a strong, powerful woman who gives zero f*!#s for the patriarchy and male expectations of women. Take your daughters, nieces, granddaughters, and the neighbor’s little girl while you’re at it. Many people are doing just that. The opening weekend audience was 52% female—not typical for a DC superhero movie. Those usually skew 60% male.

Wonder Woman garnered a 93% Fresh and 93% Liked on Rotten Tomatoes. That’s pretty solid–a three-way tie with The Dark Knight and Ironman as the best-reviewed superhero movies in history. 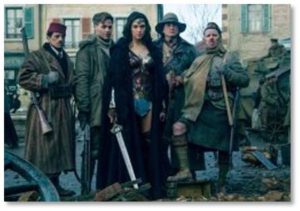 Wonder Woman with the bros in WWI France

Moneywise, it debuted at $100.5 million with overseas returns of $122 million. The movie cost about $150 million to make so it’s on track to be massively profitable. There couldn’t be a better response to Hollywood sexism than the huge success of a movie starring (Gal Gadot) and directed by (Patty Jenkins) women.

In Hollywood, which pays attention to money, these numbers may actually put a crack in the glass ceiling. Despite their expectations, their prejudice, and their hiring practices, they can’t deny this boffo box office. Will Wonder Woman lead to more opportunities from Warner Brothers and other studios that want a piece of the action? We’ll have to wait and see.

But don’t wait to see Wonder Woman. It’s worthy of Watching on the big screen.

Note: There is no Easter Egg. Don’t wait.