This weekend we drove out to Williamstown in the far northwest corner of Massachusetts to visit the Sterling and Francine Clark Institute. This sounds like a scientific organization but it is actually a beautiful art museum tucked into green hills outside a lovely college town.

Sterling Clark, heir to the Singer Sewing Machine fortune, was the man who owned i The Dakota residence on Central Park West until 1960. (His father, Edward Clark, built the structure, which opened in 1884.) The Dakota, for those who have forgotten, is where John Lennon and Yoko Ono lived until Mr. Lennon was murdered in the building’s south entrance arch as he was returning home. It has also been featured in the movie Rosemary’s Baby and Jack Finney’s novel, “Time and Again.”

Originally a small museum housed in a classical white stone structure, “The Clark” was expanded and renovated and the new structure by Architect Tadao Ando now houses an amazing exhibit of landscapes by Vincent Van Gogh. The 40 impressionist paintings and drawings in “Van Gogh and Nature” are accompanied by Japanese prints that inspired him and the show even includes a brass vase in front of a painting of that same vessel holding a bouquet of imperial crown fritillaries.

A Show Worth the Trip

The Clark Institute’s Van Gogh exhibition is spectacular. If you like Van Gogh’s work—and many people do—this show is worth a trip to Williamstown, even if it means staying overnight as we did. It begins with Van Gogh’s dark early works created during his youth in the Netherlands and ends in Auvers, France, with a painting of a rainy countryside completed in 1890. That’s the year Van Gogh took his own life with a gun at 37. 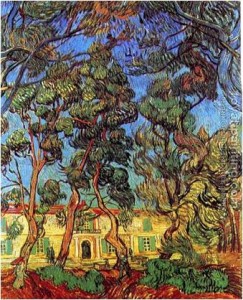 In between there are works of astonishing life and color. Some are famous while others are less well known. The one that drew me in particular was a painting of the “Trees in Front of the Entrance of the Asylum,” which showed the façade of the mental hospital in Provence where Van Gogh spent many years attempting to master the demons that tormented him.

This is a large painting. I kept trying to focus on the ground at the bottom of the painting where shrubs grew and patients wandered as well as the building itself. But the twining, twirling, serpentine shapes of the trees kept pulling my eyes upward to where they churned and writhed against a bright blue sky.

Reproductions don’t do justice to Van Gogh’s work because they can’t show the vigorous brushstrokes or the heavy impasto. I stood to the side of some paintings so I could look across the surface of the canvas and see how the thick layers of paint made shapes of their own.

There are so many gorgeous paintings in this show, which runs until September 13, that it’s impossible to describe them all. Fortunately, Lance Esplund did it for me in Friday’s Wall Street Journal. “Van Gogh and Nature Review: A Stunning Connection” Mr. Esplund’s @WSJ article is more comprehensive and informed than I could ever be. I can say that you have never seen nature on canvas that’s this alive, this dynamic, this vivid, or this beautiful.

When we had finished with the Van Gogh exhibit, we went uphill to the Lunder Center at Stone Hill, a small gallery in which resides (until September 27) the large portrait by James McNeill Whistler that he called “Grey, Black, and White.” We know it as “Whistler’s Mother” and it’s on temporary loan from the Musée d’Orsay in Paris. 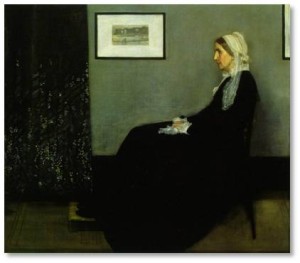 I had never thought this work terribly interesting but, like many paintings, it is far more compelling in reality than it is in reproduction. I sat in front of it for some time just absorbing the abstract composition, the texture of Mrs. Whistler’s face—the only real color in the entire piece—and the details around her.

One of these is a print on the wall, the original of which appears on the opposite wall of the gallery thanks to a loan from the Colby College Museum of Art. The Colby loan included many other Whistler prints that are exhibited across the hall.

A trip to The Clark would not be complete without going through its permanent collection: spectacular galleries filled with Winslow Homer and Frederick Remington paintings and sculpture as well as the country’s largest collection of works by Pierre Auguste Renoir. I’m not a big Renoir fan—I find his work insipid—but his wife’s name was Aline so I couldn’t pass these up. 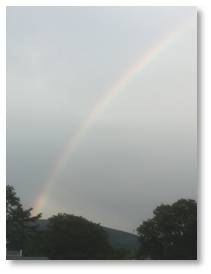 We also spent a couple of hours in the Williams College Museum of Art, which has a large collection of paintings, sculpture and objects by Charles and Maurice Prendergast, as well as American paintings from Gilbert Stuart to Edward Hopper to Andy Warhol. And I got to add another institution to my Life List of Art Museums.

If you love art, plan a trip to Williamstown before the Van Gogh exhibit closes. It’s well worth the drive. As a bonus we got to spend a lovely summer weekend in a beautiful part of Massachusetts—complete with a crashing thunderstorm and a full rainbow.