Fall begins this week.Days are getting shorter and it’s time to think about pumpkins. I’ve noticed the trees aren’t quite as vibrant; as if they are in the planning stages that result in the beautiful oranges and yellows of a New England autumn. There’s a change in the way the air smells and even before the leaves turn I feel fall creeping into my kitchen. It’s time for The Great Pumpkin. 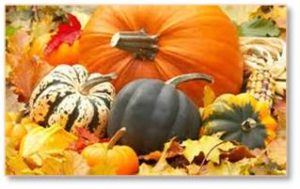 Strange though it may seem I only cook with pumpkin from September through December. These are the months that speak pumpkin to me and I make the most of them. It’s not just the pumpkin, but the fragrant spices associated with them that speak to us.

A pumpkin is not a vegetable; it’s a fruit—or more accurately a berry. Pumpkins grow in different shapes and sizes because seeds were harvested and migrated across the country as it was settled. Different climates produced different results, from very large to very small and sweet. Pumpkins originated in northern climates and these are the ones we recognize as “traditional.” Due to their seasonality, most are still sourced from local farms.

More Than a Holiday

A pumpkin is so much more than the holidays they have come to represent.  Historically it was the food of hard times. Pumpkin was a replacement for barley in beer making and in bread when wheat was scarce. It represents a rural way of life, before people migrated into cites and office buildings. We romanticize it with scenes that evoke nostalgia but history tells us it was a hard way of life. 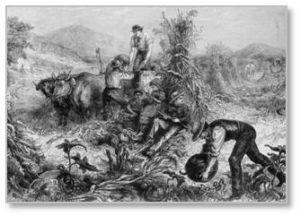 The idea of using pumpkin in recipes is not new. It’s hard to imagine an American Thanksgiving without it, but the pie we know today is quite different from the original version. Recipes using squash and pumpkin are found as far back as 1796, when it was referenced in Amelia Simmons American Cookery.

After the Civil War, Thanksgiving cooking began to be featured in women’s magazines, and in 1929 Libby’s meat-canning company of Chicago introduced a line of canned pumpkin.

Pumpkin Is a Feeling

Offered seasonally, pumpkin makes its way into hundreds of foods, drinks, and other products, earning over $400 million a year. Why is that? The answer is marketing—manufacturers recognize a market when they see one. It’s not the actual pumpkin that consumer’s love, its pumpkin spice—an aromatic blend of cinnamon, ginger, allspice, cloves and nutmeg—first sold commercially in 1934 by the McCormick Spice Company.

Pumpkins are decorative, delicious and good for you. They are high in fiber, contain very little saturated fat, cholesterol, and salt and come with vitamin E, thiamine, niacin, vitamin B6, folic acid, magnesium and phosphorus. So what can we do with them?

A good place to start is the actual pumpkin spice. Making your own is much better than buying it, and most of us have the spices on hand. It lends itself to sweet and savory dishes and once made, keeps for up to a year. 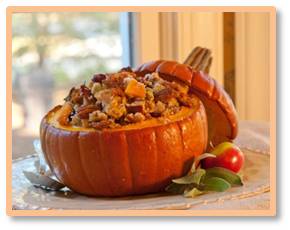 Recipes for traditional pumpkin pie are everywhere and I admit I’m not a fan. It’s the one pumpkin recipe that does nothing for me. If you like the traditional custard-in-a-crust version there are lots of options. Variations on the theme exist, however, and one of my favorites is Brown Family’s Pumpkin Pie. This is a marriage of pumpkin and walnut or pecan pie and really ups the holiday game. I like to serve it with Bourbon Maple Whipped Cream.

No autumn can pass without at least one muffin or bread recipe! I have many favorites to fall back on, so this season I am getting out of my comfort zone. We are fans of the original morning glory muffins so when I found this pumpkin version I thought—why not? Pumpkin reduces the amount of oil and they still have loads of flavor.

On the savory side, sugar pumpkins are perfect for baking and stuffing. They are tiny and sweet and lend themselves to any stuffing you can think of, from traditional bread stuffing to one I love that includes wild rice and Brussels sprouts.

Canned pumpkin is a fall baking staple. I have roasted my own, which is more work for the same end result, and I use both, but canned is definitely easier. When using canned pumpkin add the spices and gently heat the pumpkin to reduce the slight metallic flavor. This also removes some of the water and intensifies the flavor, so measure carefully for the proper ratio of wet to dry ingredients.

One of my pet peeves is the ingredient list found on the box of store-brand granola and snack bars. They are far from healthy and making your own is not that hard. These pumpkin granola bars won me over for flavor and versatility, and the recipe makes enough to share with friends. Of course you can just go with old fashioned granola and this recipe is as good as you will get. It’s delicious on its own, but I add it to yogurt and fruit.

I am compelled to leave you with one not-so-healthy dessert that will reward you with amazing taste and fill you with that fall feeling. What else but pumpkin pound cake? This recipe does all the right things and the result is over-the-top deliciousness.

Pumpkin—way more than a decoration!

1 thought on “The Great Pumpkin”