I’m a big fan of movies with strong female leads and I’m delighted that so many of them have succeeded recently at the box office. Hollywood follows the money so, despite the industry’s bias against female roles, there’s a good chance we’ll see more of them. Just within the last few months there have been three big hits with women in the starring role:

Worth More Than the Meh? 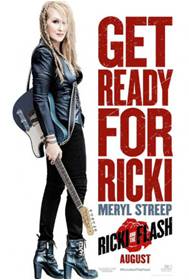 Last night I went with my movie buddy, Alane, to see Ricki and the Flash, a movie that had everything going for it, including a big female star and a female writer. Rotten Tomatoes gave it a “meh” rating of 63% Fresh from the critics but only a 54% Liked audience score. It usually works better when the audience score is higher but I was still willing to take a chance that it was worth more than a Meh, especially given RT’s heavily male gender skew for audience ratings. After all, Ricki and the Flash gives us:

Well, any number of things as it turns out. In terms of its protagonist, Ricki and the Flash turned out to be a rock-and-roll version of Blue Jasmine.

First, I had a lot of trouble liking, much less sympathizing with, Ms. Streep’s character. A woman who leaves her family, including three children, to pursue her dream of becoming a rock star doesn’t resonate with me. I found Ricki to be narcissistic, insulting, oblivious to the needs of others, offputting and difficult.  She’s abusive to nearly everyone from her ex-husband’s second wife to the bandmate who (unaccountably) loves her, to customers at the supermarket where she works to make ends meet. 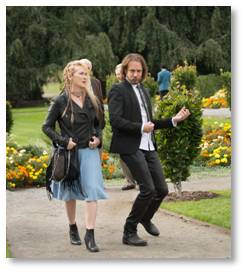 Ricki at her son’s wedding

Ricki dresses like she’s onstage all the time, despite how inappropriate the hair, makeup and tight pants might be for a woman of her age, much less going through airport security or out to dinner in a fine restaurant. Unclear on the concept of making friends and influencing people, she seems to think that everyone should like and forgive her despite a dearth of likability and no indication that she learns anything, much less feels remorse. Ricki is loud, brassy, offensive, and unpleasant. It’s hard to get behind a character like that.

Second, the music takes over the movie. That might work better in a full house than it did when, like last night, there are only a few people in the theater. But I wanted more of the story and fewer performances. Sure, it’s fascinating to watch Ms. Streep, a woman of many talents, demonstrate yet another one—and do it very well—but in my opinion it’s not enough to carry the film. It was a relief to me every time the movie moved offstage to deal with the real world.

Third, Ricki’s narcissism is given full rein, particularly in the reception for her son’s wedding.  At nearly every point in the movie Ricki tries to make things all about her. (Spoiler Alert) After abandoning her kids, giving them short shrift in her life as second-rate rock musician, paying so little attention to them that she knows almost nothing about their lives and doesn’t even attend her daughter’s wedding, she seeks redemption by giving a gift of her music. Which might be fine if she just got up and sang him a song. But no. Instead she brings her entire band, pushes the reception band off stage, and puts on a full-scale production.

This “gift” is just more of Ricki making it all about her. She’s the star. At last her family is paying attention to her. Everyone is looking at her. Everyone is dancing to her music. We’re supposed to feel good about this as the movie ends, somewhat abruptly, but it didn’t work for me. This wasn’t remorse or redemption. It wasn’t learning and growth. It certainly wasn’t love. It was just a selfish, damaged person doing more of the same things that caused so much damage to others. 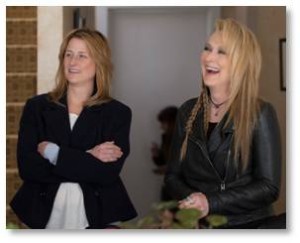 I didn’t leave the theater feeling good about Ricki or the movie. I was just disappointed that Meryl Streep, of all people, should have starred in a woman’s movie about a woman who was not worth the time, work, and energy that this fine actress put into it.

My concern is that Hollywood will blame the failure of @Rickimovie on a female star — or an older actress — instead of the character she portrays. Then use that as an excuse for not creating more roles for older actresses.

Send us more movies about strong women of any age, please. But make them about women who are worth the time and money—not just to make the movie but for me to spend my money and two hours of my time watching it. There are a lot of female characters who are worth a starring role. Ricki Rendazzo was not one of them.