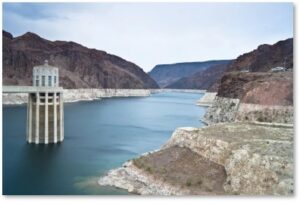 Now that humans have succeeded in screwing up our climate, we are finally waking up to what that means for us every day. Our weather—which is not the same as our climate—swings from drought to flood, seemingly with the flip of a switch. Wildfires, tornadoes, and dust storms ravage the southwest. Water levels have dropped so low in Lake Mead that it is approaching deadpool status. That point, where water no longer flows over the dam, means the Hoover Dam could lose its ability to create hydropower for the west — a double whammy.

Mapping this Summer’s Extreme Divide in Rain and Drought

Scientists warned us about these dangers seemingly forever, while people ignored their pleas. Governments directed their attention and budgets elsewhere. We carried on doing things pretty much the same way as before and ignoring how those things weren’t working for us any longer.

Consider these facts about our weather:

New Ways to Think About Water

In a drought, the ground dries out and gets hard. The longer the drought lasts, the further down the dryness extends. 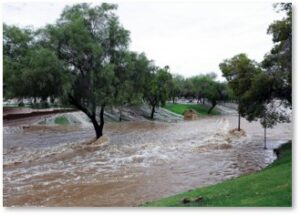 When the rains do arrive, they run off the hardened land without sinking in. Streams and rivers overflow, flooding whole towns and counties. All that water eventually rushes down to the ocean and out—gone. None is retained for times when that water will be needed.

What we need to do is begin thinking differently about weather, water, and how we handle them. Our resistance to doing so will grow more dangerous as parts of the country flip from drought to flood and back again

We have lived so long with adequate water supplies—or at least no water crises—that most parts of the country haven’t thought about how to retain the water that does come down. We need to develop ways to hold on to water from a rainy season to use in a dry season.

In a recent storm, our town got about a quarter of an inch of rain—not much in the big picture. But I put a five-gallon bucket on the porch to collect the water that came off a part of the roof where two angles meet. The bucket filled up and I probably could have filled another. I used that water on a shrub that was drooping.

Rain events are also water opportunities. Think of how much water we could save if we retained what actually falls from the sky.

Read How a Rancher Made a Truce with the Beavers

We need to develop methods of moving water from rainy parts of the country to dry states. A flood in Georgia could provide water to a dry part of Texas. Heavy rains in Washington State could send water to northern California. We allow rainfall to remain local because we never had to think about moving that water before. Now, we do.

If we can build pipelines to move oil between states and even countries, we can do the same for water, even if it takes a profit motive to accomplish. 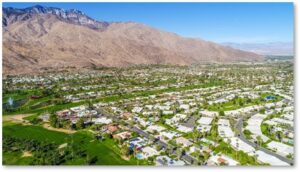 Palm Springs in the Sonoran Desert

We need to stop building homes in deserts like the Mojave and the Sonoran. The invention of air conditioning has allowed people to live in parts of the United States that once were unlivable.

Deserts are too hot and have too little water to support populations of any size. Yet, desert living has become popular in the United States, supported by drawing more groundwater from aquifers than winter snows produce to recharge them.

Worse, once people settle into their desert homes, they don’t adapt to dry conditions. Instead, they begin trying to make them as green and verdant as the places they moved from. They plant trees and lawns; golf courses grow lush fairways. That takes even more water. This is not sustainable. 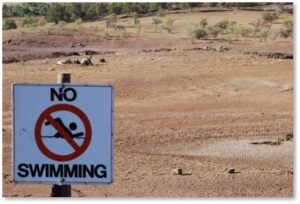 In other words, the rains won’t come back and sunny California will become a new desert unless they find other sources of water. The time has come to start thinking outside the river.

We need to stop rebuilding in the same places. We all know the definition of insanity that involves doing the same thing over and over but expecting a different result.

If you live in what has become a wildfire zone and your whole town burns to the ground, does it make sense to rebuild in the same place? If you live on a barrier beach, on the shore, or in a low area prone to flooding, and a storm destroys your house, is it smart to rebuild that house in the same place and in the same way? Should you be able to buy insurance on that new home if you do?

Heads in the Ground

Are we doing those things? Not so far. With heads stubbornly stuck in the ground, we persist in doing things the same way. We want to continue living as if temperatures aren’t warming, precipitation patterns haven’t changed, glaciers and ice sheets aren’t melting, and whole forests aren’t going up in flames. 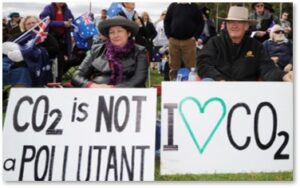 What does it take to change how people think and act? Well, we certainly need more than expert warnings, as the global-warming crisis has proven. Decades of fact-based warnings couldn’t break the power of fossil-fuel lobbyists and their political contributions. No alarms could break through the anti-climate-change propaganda produced by public relations firms working for those industries.

Now that the consequences of our inaction are coming home to roost, the inertia and apathy may change. Tip O’Neill once famously said that all politics are local. There’s nothing more local than losing your home to weather that’s wilder and more dangerous than ever before. Even more local is being unable to bathe or flush toilets because the water mains are dry or the water supply is tainted.

Meanwhile, we see the day’s weather disasters on the evening news and marvel at the confluence of fire, flood and drought. The flip-flop between not enough water and too much water is jarring. One day people will wake up and take action but I’m not holding my breath.