This summer I read a book that changed me. I can’t say I wanted to read it – it was not a book that beckoned to me the way some books do. It was my book club’s monthly selection and the main reason I belong to the book club is to discover books I might not be inclined to read. That’s how the book and I met. I can’t say it was an enjoyable book but it was an eye opening one. Once read, the information could not be ignored.

So the book and I sat down one night and I began to read Garbology, Our Dirty Love Affair with Trash, by Pulitzer Prize winning journalist Edward Humes. This was no Fifty Shades of Gray–this really was a book about garbage. Everybody’s garbage. I was reading about trash in the United States and what happens to it after it leaves the bin under the kitchen sink. We put our trash in a bag on the curb and, like magic, it disappears. You might take your trash to the dump – in that case someone like Big Mike who works at the Puente Hills landfill in Los Angeles is probably making your trash disappear. Look him up – he’s real.

The War on Trash

This is less a book review – though I will talk about it – and more about how the book changed me. The book got mixed reviews–some critics praised it while others found it lacking in statistical analysis and global change agents. One critic went as far as saying individuals could not affect any change–it could only be accomplished by businesses and city policies. He said individuals cannot enable the strategy that can make our economy and environment sustainable. I respectfully disagree. The power of one can be mighty, and change often has its genesis in one human being. I decided to take on the war on trash.

Trash is not a new concept. The Greeks dealt with trash issues 2500 years ago, creating the first municipal dump in history in an attempt to reduce the amount of trash thrown in the streets. Ever since then, we’ve been trying to figure out what to do with our trash. I was shocked to learn it is America’s largest export.

If you are new to the world of garbage, Humes presents it as “nothing less than the lens on our lives, our priorities, our failings, our secrets and our hubris”. Each of us will generate 102 tons of trash in our life time, and our country will discard $50 billion in material items that are no longer needed or wanted.

Americans generate more trash than anyone else on the planet: more than seven pounds per person each day. Trash is a costly business. It costs money to make it, it costs money to recycle it, it costs money to put it in landfills, and it has serious environmental costs. What we do with the trash is important, but the author also looks at how we come to have so much trash to throw away in the first place.

Trash is Who We Are

Garbology reveals not just what we throw away, but who we are and where our society is headed. Waste is the one environmental and economic harm that ordinary Americans have the power to change. Humes looks at trash through historical, environmental and commercial lenses and helps readers see how we’ve gotten to the point of the “102 ton legacy”.

Our trash is literally everything we have ever purchased. It is food, furniture, clothing, glass, metal, wood, boxes, bottles, bags, carpets, cars, paper, appliances and everything in between. It is not biodegradable in the way we hoped. It simply decomposes, breaks into smaller pieces and rots. Tons of it are in the ocean.

The Great Pacific Garbage Patch trash vortex is an area the size of Texas. An estimated six kilos of plastic for every kilo of natural plankton, along with other slow degrading garbage, swirls slowly around, choked with dead fish, marine mammals, and birds. Some plastics will not break down in the lifetimes of the grandchildren of the people who threw them away. I encourage you to explore this in more detail as it is beyond my ability to describe it.

So what am I doing now that I didn’t do before? After reading “Garbology“ I knew I needed to change how I contributed to and dealt with the trash in my life. Not just recycling – that is actually the tip of a much larger iceberg. Trash transformation begins with purchasing differently, changing storage and disposal methods and being mindful of what you need and your ability to use it. I made lots of small changes and several big ones. 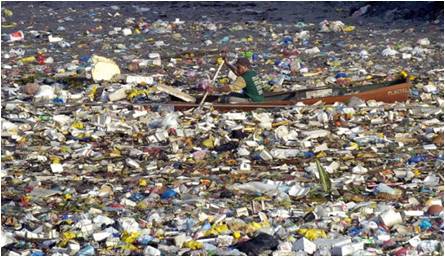 Let’s talk plastic. This is one of the examples in the book that I felt I could tackle. I decided plastics of any kind were out. Easier said than done once I discovered just how much plastic was in my home. It’s not an insignificant change.

I asked the dry cleaner to leave the plastic off my clothing. I began to make my own household cleaners and purchased special spray bottles. I stopped putting produce in plastic bags at the market, and I buy items in bulk whenever I can. At the author’s suggestion, I bring my own containers into the store, ask that they be weighed, and use them instead of the bags. I replaced all the plastic storage containers in our home with glass jars that I found in second hand stores. I bought a vintage set of Pyrex® refrigerator dishes to replace the containers we used for storing leftovers. I also buy less food, grow more of my own produce and compost a lot of the kitchen waste. I am still working on things like dish detergent and shampoo, not to mention mascara and anything prepackaged and wrapped in–you guessed it–plastic. Some days are easier than others.

Here’s the thing. This is really hard until you do it enough times that it starts to get easier. Read the book if you dare! Pick one thing and commit to changing the way you’ve been doing it. You will discover how much that one thing permeates your life and you might be tempted to give up. Stick with it and you will see the change taking place. You will be doing a good thing for yourself and your planet. You will begin to feel good and powerful–even though you are only one person.

Make it make a difference.

AK NOTE: I use my own bags for supermarket groceries and paper bags if I don’t have enough.  I refuse plastic bags at the store and just carry things.  I recycle paper, plastic, cardboard and glass at the town’s tranfer station.  But Susanne has some excellent ideas that I want to try.

1 thought on “The Power of One and Garbology”