We were driving home from an early birthday dinner last night with the thermometer at only nine degrees Fahrenheit when the sight of colonial houses locked in by snow and cold got me thinking. What must it have been like in New England during the Little Ice Age, when temperatures were more like this winter’s than the milder ones to which we have become accustomed? How did families stay warm in un-insulated houses with only fireplaces for heat? 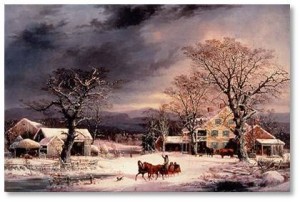 The Little Ice Age was a term created by Francis E. Matthes in 1939 to describe the cold centuries that followed the 300-year Medieval Warm Period. Different sources give the Little Ice Age different time frames.

Whether the Little Ice Age lasted for 300 or 500 years, it dropped significantly colder winters across Europe and North America and those winters had “dire consequences” for the population. Prof. Scott Mandia of Suffolk University says, “The colder weather impacted agriculture, health, economics, social strife, emigration, and even art and literature. Increased glaciation and storms also had a devastating affect (sic) on those that lived near glaciers and the sea.

Boston was settled in 1630. That means the colonists suffered through those colder winters for 220 to 240 years. In 1750, the population of New England was estimated at 360,000 people, excluding Vermont, which was not then a state. This does not include the tribes of the First Nations of course. By 1850, this number had increased to 2,738.116. That’s a lot of people living through year after year of brutal winters. 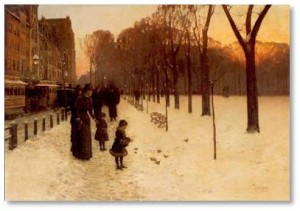 Imagine Polar Vortex temperatures without benefit of central heating, hot water in the tap, fleece clothing, and Thinsulate™ gloves. Imagine getting around by open sleigh over packed snow with no toasty heater, seat warmer or cup holder for your hot Starbucks coffee. Imagine huddling around the fireplace for warmth and then going to bed in a frigid room, using a warming pan full of hot coals to take the tomb-like chill out of the sheets. Imagine hearing the winter wind rattle the window and feeling it flow into the house through all the cracks and crannies.

It’s no surprise that both people and their clothing were dirtier then. Who would want to get up in a freezing cold bedroom and bathe in ice water? When you washed clothes and hung them out on the line, they would have frozen like boards and had to be warmed up by the fireplace before they would dry completely. 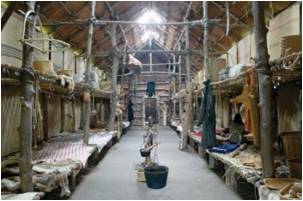 People of the First Nations were smarter. They didn’t live in tall houses full of separate rooms for different functions, all of which needed to be heated. Instead they lived in longhouses shared by many families and with hearths or fireboxes in the middle. Both the fires and body warmth would have warmed the air.  The air probably stank and there was no privacy. But body odor and privacy are fine distinctions when you’re trying to just stay warm.

After our drive through the cold night, I was glad to get home to my well-insulated, centrally heated house, flip the switch on the gas fireplace and make a cup of tea using the instant-on spigot. Are we softer than our ancestors? I’m sure we are. But I for one am not willing to trade away our comfort and amenities. The Polar Vortex came back for Round 2 and I like to be warm.

1 thought on “The Polar Vortex and the Little Ice Age”