I would like to think that in 2014, over a decade into the 21st century, we live in a post–sexism world. Unfortunately, current events keep pulling me back into an unpleasant reality that proves the persistence of sexism.  Just consider these recent reports: 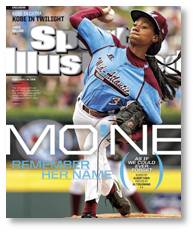 Mo’ne Davis, the pitcher who led her Mid-Atlantic Little League team to the World Series was treated with disrespect by a Fox News anchorman. Despite her blazing 70-mile-an-hour fastball and no-hitters, the only question he could think to ask her was why she didn’t play a more “female friendly” game like soccer.

Ms. Davis responds with dignity and more respect than he showed her that she plays soccer too, but couldn’t call it her favorite sport. She was the first female Little League pitcher to win a game in the 68-year history of the LLWS and her last start drew record-setting TV ratings. Yet this is the only question he could think to ask. Would this same man treat any male athlete — black or white, old or young — who had appeared on the cover of Sports Illustrated this way?

In its small business report on “How to Close the Startup Gender Gap,” The Wall Street Journal interviewed 11 women to get their opinions on how to build women’s presence in the field of entrepreneurship. The @WSJ report states:

“There’s a huge gender imbalance in the entrepreneurship world. For all the strides women have made in launching startups and driving the economy forward, they face persistent obstacles that hamper their progress—as documented in a recent Senate committee report that show how far women lag behind men in areas like access to capital.”

The same U.S. Senate that issued the committee report above is also full of men who make rude and sexist comments to the few female Senators in their midst.  As reported on CBS This Morning, New York Senator Kirsten Gillibrand listed  in her new book “Off the Sidelines” some of the more outrageous comments made by her male Congressional colleagues from both houses in response to the weight she gained while pregnant with her second son. 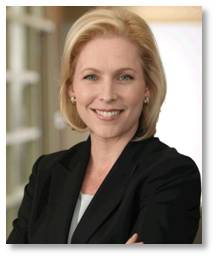 These included such gems as, “You’re even pretty when you’re fat,”  “You wouldn’t want to get porky,” and  the ever-popular “I like my girls chubby.” Not only did a series of men feel free to make comments about her baby weight, they also took the liberty of grasping her by the arm and squeezing her waist as they did so. Again, people, this demonstrates a total lack of respect for the woman, her position, her accomplishments, and her privacy. I can just imagine a man’s reaction if a female colleague commented on his weight or appearance.

In the Forbes article, “What It’s Like Raising Money as a Woman in Silicon Valley,” an anonymous CEO of a technology company reports some of the offensive things that were said and done to her as she attempted to raise money for her startup company.  Although she dressed carefully and wore her hair conservatively, the men just didn’t get the message that she was interested only in business. They had their own agendas, which had nothing to do with business, and there appeared to be no governor on what they considered appropriate to say and do. These included the CEO being groped, insulted, and invited into a marriage of convenience. This might have worked in the nineteenth century but, well  . . .

I could, unfortunately, go on . . . and on . . . and on. Even in 2014 there appears to be no dearth of material on the persistence of sexism in American culture. We can take Sheryl Sandberg’s advice and “lean in” all we want but the men in the room just might take that action as an opportunity to sneer and leer—and maybe grope. 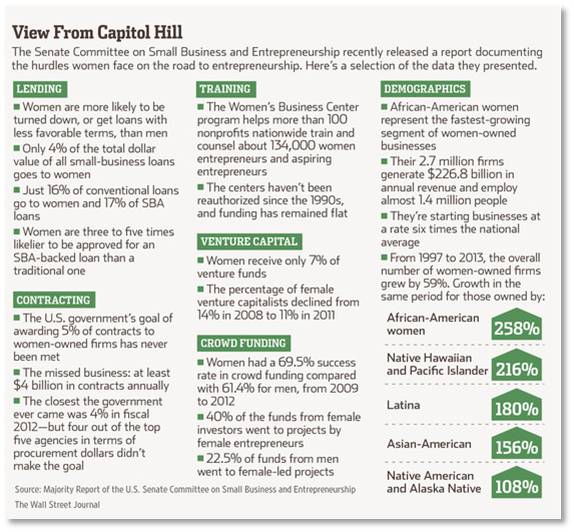 Image from The Wall Street Journal

A World of Their Own

Women in any arena or industry can’t fix this problem all by themselves. No amount of careful dressing, guarded speech, toned fitness, conservative hairstyles, or business preparation can put a stop to the entitlement, arrogance, superiority, and superciliousness that drive such behavior. As writer Margaret Carlson said on @CBSThisMorning, “Men are in a world of their own.”  Inside that bubble, they clearly feel free to say and do whatever they please, convinced that they have the right to do so. They aren’t ashamed of or embarrassed by their actions because they don’t see that they have done anything wrong.

There is opportunity for everyone in defeating this persistent blight on our culture.  Joanne Wilson, a startup investor and advisor in New York, says in the @WSJ article:

“Women network differently, and they think differently than men. We should applaud that. That is why having a balance of men and women in startups is one of the keys to success.”

Girls might study science and technology but they won’t stay there if “frat-boy, bro-grammer antics actively alienate women.”  And they do.

Now what does it take to get the men to understand this?  Anti-sexism business policies don’t seem to be helping all that much—even when they’re enforced. Or does it take just getting more women into Congress, the corner office and Little League? @FoxNews already has lots of women and I hope they have straightened out the idiot who insulted Mo’ne Davis.

2 thoughts on “The Persistence of Sexism”