As we read news stories about devastating fires in Pakistan, China, and Bangladesh, we might be tempted to feel superior that these things don’t happen in the United States. We may even get a little smug because we know better than to allow such dangerous conditions. The reality, however, is that these countries are simply in a different phase of their economic development—one that we went through in the late nineteenth and early twentieth centuries. By offshoring jobs to other countries, we take advantage of their lack of regulations to get cheap labor.While The Times of India called such fires “a distinctly South Asian tragedy,” we should remember that this country had them, too. Back when clothing was still manufactured in the United States, fires happened in the New England mills where cotton fabric was made and the New York sweatshops where it was sewn into clothing.

The worst and best known of these disasters was the Triangle Shirtwaist Fire in New York City on March 25, 1911. It killed 146 garment workers, mostly young women who were new immigrants from Italy, Poland and Russia. They died from the fire, from smoke inhalation, and from either jumping or falling to their deaths from the eighth, ninth, and tenth floors. 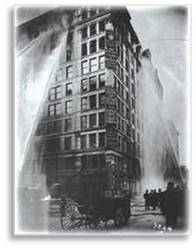 The workers, some of them as young as 13, sewed from 7 a.m. to 8 p.m. seven days a week, with a half hour for lunch. They made shirtwaists—women’s blouses with a tight waist and puffy sleeves—in working conditions for which “unsanitary” was a euphemism.During the fire, they died in such numbers from a familiar cause—management had locked the stairwell doors and exits to prevent workers from leaving the building. Workers had to leave the Triangle Shirtwaist building to go to the bathroom (only with a supervisor’s permission), so management locked the doors to prevent malingering or pilfering. Only the foreman had a key. And all the doors opened inward.

When the fire broke out in the late afternoon, the only safety measures available were 27 buckets of water and a fire escape that collapsed when workers crowded onto it. There were fire hoses but no water. Water from Fire Department hoses could only reach the sixth or seventh floor and their ladders also went no higher. With bales of flammable materials, paper patterns and wooden tables feeding the fire, it spread rapidly. Twenty five women jumped down the elevator shaft to escape, their blood spilling onto the passengers in the car below them. Nineteen bodies were found burned to death against the locked doors and another 25 died huddled in a cloakroom. Ten made it safely down the fire escape before it buckled and trapped 25 more.

Jumping to their Deaths

Many of the girls, their hair and long skirts ablaze, jumped from the window ledges.  They often held hands three and four at a time for courage but they died on the concrete over 100 feet below. Some of the girls tried to jump onto the Fire Department ladders but none made it. When onlookers and firemen tried to catch them with blankets, the speed of their falling bodies tore through the makeshift life nets.  The Triangle Shirtwaist fire was the worst disaster with the greatest loss of life in New York City until the World Trade Center buildings burned in 2011. In an eerie echo, of the Triangle fire, people also jumped to their deaths on 9/11—but from much higher up.

Offshoring to the Past 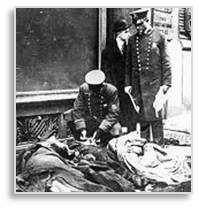 While American manufacturers have “offshored” their work to factories in South Asia, they have also effectively outsourced it to an earlier time. Today’s conditions in South Asian factories are what they were here in 1911—over a hundred years ago. Back then, workplace deaths weren’t that unusual here either: one estimate claims that over 100 workers died on the job every day.What happens in South Asian will repeat what happened here. A government that felt it had no place in regulating business was forced to change its position. The Triangle Shirtwaist Fire drove the creation of city, state, and federal safety regulations. The disaster also fueled the formation of unions with members demanding better and safer working conditions as well as worker’s rights.

That will happen again when the garment workers of Bangladesh, China and other South Asian countries say that they’re mad as hell and won’t take it anymore. They will decide that “job-killing regulations” are better than people-killing disasters.  They will insist that workers’ lives have meaning and value there as well as here.What will happen to the garment industry when it runs out of under-developed countries where desperate people will work for low wages in dangerous conditions? Who knows. But it will be interesting to watch the process happen.