Today it’s sunny but cold and very windy. The jet stream has descended upon us again, delivering a wind-chill factor in the twenties. But yesterday—ah, yesterday!

On our one day of spring, the sun rode high in a clear blue sky and the temperatures rose to almost 60 degrees. I went for a long walk and remembered, if briefly, what it was like to be outside and not shivering. I went uphill through the industrial park and onto the Charter Oak Country Club service road. This way I could be sure to stay dry because the roads were mostly clear and there was little traffic. Elsewhere, I would have been soaked by spray from cars and trucks on the wet roads. 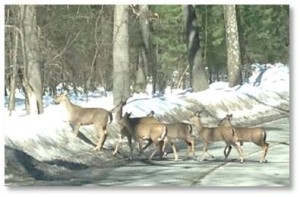 Six does on the move

I didn’t know what I would see on my trip. The deer winter over in trampled areas called deer yards, where they live on branches, leaves, twigs, fruit and nuts. After being confined for a couple of months they are are emerging, both hungry and a little confused at being out in the open. I encountered these six ladies on the road to Concord last week. They milled around like teenage girls at a dance before heading back into the woods.

The Sounds of Spring

Basking in spring warmth, the huge snowpack was melting everywhere and the sound of running water accompanied me on every step. Water dripped off roofs and through downspouts. It ran into the road where it puddled and then dropped into storm drains. It probably filled the streams and brooks, too, but they are still buried under a couple of feet of snow. Water trickled, dripped, cascaded, tinkled, burbled and plinked, making every sound water could possibly create. It was like walking under and through a liquid xylophone. 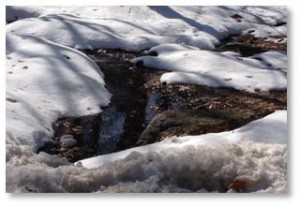 A patch of open water

I still couldn’t smell much, though, except car exhaust and wood smoke. The ground can’t warm up until the snowpack is gone. Only a few patches of it appeared here and there where running water had cleared the snow away.

The songbirds were also out and around, happy to greet the warm day and singing their little hearts out. I heard a variety of bird calls coming from close by and far away. Then, as I walked up the driveway along the sixteenth fairway there came the wild tropical call of a pileated woodpecker. He flashed across the fairway and into the woods on the other side of the road, landing on the trunk of an oak. The large body with its vivid black, white and red colors is unmistakable. I tried to take a picture but he was too fast for me, taking off again and disappearing into the distance. This is the area where I have seen him before so there must be a nest close by—or will be again soon. You can hear his cry on the Audubon Society’s eNature website. 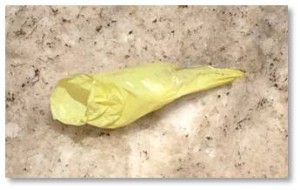 Little surprises poked up in places. Like newspapers that were buried by snowplows during one of our many big storms in January and February. I’m looking forward to seeing snowdrops and crocuses peeking out of snowbanks instead of yellow plastic bags.

When I got home I cleaned up my front walk. A Canada goose has been visiting, looking for grass to eat alongside the walkway. Given that the ponds, lakes and water hazards are still frozen over, the geese look for habitat wherever they can find it. Being a grass processing machine with feathers, our visitor had left some residue behind. Another scat deposit looked like a coyote had also used the walkway when out hunting. I tried to identify the animal tracks coming down from the golf course but the snow was still too deep.

On a more pleasant note, the flowering trees were beginning to swell with buds, although you had to look close to see them. The deep freeze may be back in place today but the plants, birds, and animals are going about their spring business as best they can. It’s a hopeful sign.

1 thought on “One Day of Spring”