Once we pass Halloween we officially enter The Holiday Season. One can argue that Labor Day is actually the beginning of the holiday season but I don’t think we have reached that point—yet. 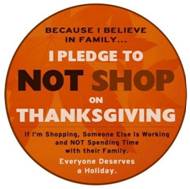 Thanksgiving is still a week away and Christmas looms four weeks after that. This means merchants have a long pre-holiday chunk of time in which to sell, sell, sell.  And they’re doing that with a vengeance.  Thanksgiving has become the holiday that stores want to rush past on their way to the Christmas season.

To accomplish that, they are shortening Thanksgiving Day as much as possible: opening their doors at midnight, 10:00 p.m., 8:00 p.m., 6:00 p.m. The worst of them are ignoring Thanksgiving altogether and forcing their employees to work all day. This is called Black Friday Creep and it means that employees are pressured or required to give up their holiday.

If You’re Shopping, Someone Else is Working

This is worse than working on Christmas because, ideally, someone who celebrates Christmas can trade off their schedule with someone who doesn’t. But every American—regardless of religion, race or ethnic background—celebrates Thanksgiving.

How do employees feel about it?  The Huffington Post says, “For some workers, it has started to set in that they may never enjoy a normal Thanksgiving again. And as much as the retail giants would like to point fingers at their competitors, or say they’re just following the demands of shoppers, plenty of workers view this development as nothing more than a moral failing of corporate leadership.”

For these companies—and their corporate leaders—I have a message: I WILL NOT SHOP ON THANKSGIVING. AT ALL. NEVER.

I’m not the only one. No-shopping pledges are popping up on Facebook and lots of people are Liking and Sharing them.  There are even pledges, which you can sign and send in for even more impact. If you, like me, think that Thanksgiving should be for families, for relaxation, for shared celebration, for a period of joyful reflection, (okay, for football), then please don’t encourage the companies that would prefer to abolish it or that force their employees to come in to work.

A Conspiracy of Greed 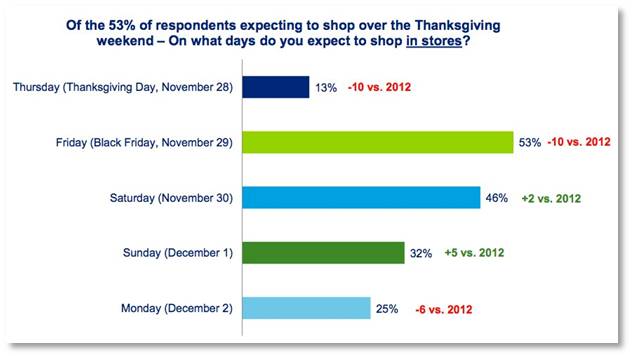 You can sign the one of the pledges below, share the Facebook messages or simply stay home. Nothing closes a retailer’s doors faster than not making any money.

Black Friday is called that because it is the day on which retail stores make between 20% and 40% or their revenue, scoring profits that take them into the black for the year. It’s no surprise that they want this to happen sooner if they can manage it. But none of us want Thanksgiving to turn into Black Thursday.

Worse, the bargains aren’t even worth the sacrifice. Prices go down for some big-ticket electronics but lots of other things are marked down further as the season goes on.  Many stores offer the same, or better deals online.  And a lot of it is cheap stuff—things you would not ordinarily buy—that the stores are trying to manipulate you into buying in the Black Friday frenzy. As Digital Trends say, “Cheap crap is cheap crap.” Is that worth blowing off a family holiday for your family and those of the store’s employees?

So I won’t be shopping on Thanksgiving Day. I hope you won’t, either. Spend the day with your family. Be thankful for your blessings.Share a wonderful meal. Watch some football. Put up your feet and relax (but only after  you have helped clean up).

There will be plenty of time for Christmas shopping after that.