Last night I went to a lecture on New England’s stone walls at the Assabet River National Wildlife Refuge. The speaker was Robert M. Thorson, a professor of geology and geophysics at the University of Connecticut, whose specialty is “the origin and nature of land forms.” Mr. Thorson is also the author of Stone By Stone, a history of New England’s stone walls, and Exploring Stone Walls, a field guide designed to help the reader find and understand the ubiquitous stone walls in this part of the country. 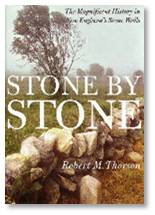 It was a fascinating presentation both because of the subject matter and because Mr. Thorson is an engaging and humorous speaker who is passionate about his subject. To my surprise, the room was packed and they had to put chairs out into the hall to accommodate the crowd. (I just missed getting the last chocolate cupcake, too.) Who knew so many people were interested in this subject?

In a little over an hour we learned, among other things, the three reasons why an area in any part of the country will or will not have stone walls. They are (1) glaciation, (2) hard rock, and (3) a farming/agricultural economy. Thus stone walls are grouped in the southern part of New England because that’s where people began farming when the settlers arrived in the seventeenth century and spread west across Massachusetts as well as into Vermont and New Hampshire. They peter out as you travel north into Maine because the economy there was mostly one of hunting, fishing, and logging. There are not as many stone walls west of the Hudson River because the stone there is softer. Likewise, one sees fewer stone walls south of New York City because that’s where the glacial ice sheet stopped. 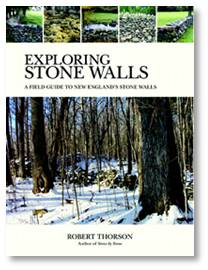 We’re so accustomed to seeing stone walls everywhere in New England that they almost seem to have grown up on their own. A wall might meander alongside the road then branch off into thick woods, shoot uphill, or wander down into a swamp. They cross golf courses, follow power line breaks, appear in subdivisions, and mark cemeteries. To us in the 21st Century, they appear to have no function save for the picturesque but stone walls were essential to agriculture from about 1630 just before the Civil War.

The farmers were faced with thick forest and a soil full of hard rocks left by the glaciers. Before they could plant a crop, they had to clear the fields. Wood from felled trees could be used to build homes and barns as well as burned for warmth during what was then the Little Ice Age. Rocks presented a different problem, however, and the easiest solution was to haul them off to the side of the field and dump them. These long rows of discarded stones became walls and fences that kept livestock from wandering off and established boundaries between one farm and the next.

Some stone walls look just like that—loose piles of rocks that were just dumped in lines spread over the landscape. Others show that the men who built them took pride in their work and piled stone on stone in a way that produced engineering marvels and beautiful works of art.

The walls appear in forests, on hilltops and other uninhabited areas because those places once were fields that radiated out from the farmhouse as the farmer “improved” his land. As Mr. Thorson says in Stone by Stone, “By the middle of the nineteenth century, when deforestation reached its peak, more than half of New England’s native forests—as much as 80 percent in the heavily settled parts of southern New England—had been cut down and replaced with ‘open space,’ meaning tillage, mow land (land used for hay cutting) and pasture.”

That process began to reverse in the 1850s as people migrated west to find better soil and bigger farms. It increased in 1930 as the automobile made it possible for non-farming people to move away from the cities and out into the countryside to live. The trees have been growing back ever since and New England is now back to being 80 percent forested.

He showed us a photo of Block Island in the nineteenth century, so depleted of trees that the land was marked only by stone walls and the residents were burning peat for lack of wood. Then he showed a photo taken from the same point today, with the walls invisible under a thick canopy of trees. This process has taken place all over New England and that’s why the stone walls now appear in the midst of woods and on hilltops.

The stone wall behind our home

There’s a stone wall behind my home, separating the farmland on which my condominium community was built from whatever was there before the golf course that’s now on the other side. There are stone walls along almost every street around here. Mr. Thorson told us that a fencing census done in 1871 determined that there are 240,000 miles of stone walls in New England. We are so used to them that we barely see them and familiarity breeds contempt. As Mr. Thorson pointed out last night, we don’t try to preserve them but instead mine them as a source of rocks that we can use for other purposes.

Now a natural part of the landscape, however, they also provide habitat for wild animals that shelter in them, breed in the damp soil around them, or use them as highways through thick brush. Mystique loves our stone wall and treats it as her own personal “catwalk,” as do the chipmunks and squirrels. That means we should take care of our stone walls and appreciate them for their history and the works of art that they are.