A few weeks ago, I responded to a query on the Question and Answer site called Quora. The question was this:

“What is something unrealistic that you often see in movies
that annoys the hell out of you?”

My husband and I go to the movies frequently—or we did when the theaters were open and life was normal. Plus, television offers a lot of movies: old ones, new ones and many made specifically for streaming services. Over the years, we have seen quite a few things that are completely unrealistic—and very annoying.

In answering the question, I provided a list of 20 annoying movie scenes, things that jump off the screen at us. My answer mys have touched a nerve because it has gotten over 2,000 Upvotes on Quora and more than 140 comments.

Down But Not Out

Fellow Quorans began to reply immediately. Whether they agreed or disagreed depended on the item. For example, many dismissed the first two Items on the list as simple time savers the director used to keep the story moving. Fair enough. It still surprises me, though, when characters treat food and liquor as freebies.

I got strong disagreement on Item #13, about people tossing back a shot as though it were iced tea. Bartenders and other responded that they had seen many regular drinkers do this. I don’t really consume hard liquor or go to bars, so I’m more than willing to take their word for it.

One woman disagreed strongly with the items that dealt with historical inaccuracies. She warned me not to paint all of history with a broad brush because cultural norms change. Fair enough.

Still, I find it jarring when a male character in a 17th century greets a woman he has never met before by her first name—a 20th century American informality. Or wen a movie acts as if racism never happened in the past. Also, when female characters wear male clothing, which was often outlawed even here in the U.S.

Yes, cultural norms change but, generally speaking, people did not act or speak then the way they do today. Those constitute anachronisms.

Two of the items, though, generated more comments than any of the others:

Look at the Road!

Item #3: This is the big one that sits right at the top of annoying movie scenes. More people reacted to this item than to anything else. It annoys EVERYONE. Directors should know that audiences notice when someone who is supposed to be driving takes his/her eyes off the road for more than, like, three seconds. Yes, the director wants the driver to look at his passenger and, thus, the camera. While a driver might get away with this on a long, straight highway through the desert, though, it just wouldn’t happen in a city—and I have seen more than one show where this happens in New York City or Washington D.C. traffic.

Having a driver look away from the road for an extended period of time tells me that the characters are not really in a car, which distracts me from the scene. It doesn’t matter how good the special effects are, I know the characters are on a set. Then, I start getting tense.

“Look at the road. Look at the Road!! LOOKATHEROAD!!” I am, of course, supposed to be listening to the dialog or following a complicated plot point or hearing who the real villain is. Instead, I’m hyperventilating and shouting, “There’s a truck coming. A car just pulled out. There’s a kid in the road. LOOK OUT!” At the very least, this kind of scene counterproductive. At best, it tells me the director doesn’t understand the impact of the scene on his audience. At all. 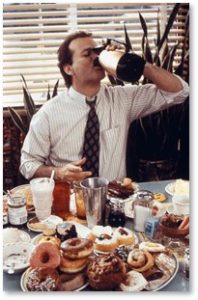 Item #5: Many commenters noted the ridiculousness of this scene, probably because we can all identify with it. For working parents, making breakfast is a big deal. To go through all that effort and then have your family turn their backs on it affronts us.

One woman said: “Gets me every time. Buffet style breakfast but dad says ‘I’ll grab some toast at the office.’ Who walks away from an omelet and pancakes?” A follow-on comment added that, in her experience, no one had ever made toast at work, although I suppose this is feasible if your company has a cafeteria. But still, who would prefer cafeteria toast to a home-cooked breakfast? And why do the characters all seem oblivious to the insult their behavior offers?

I know that the writer is just trying to keep the plot moving. So why have the cook make breakfast in the first place?

Look Up! Climb Up! 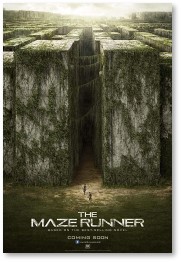 Item #19 is true: no one ever looks up. They can be running from the mob, the cops or a pack of howling zombies but they will run straight ahead only to be caught or stymied when they could easily go up a ladder, scale a wall, or climb a tree. The other night I saw this happen when the characters were standing right in front of a ladder.

Now, I always think about going up, probably because I liked to climb trees as a kid. In The Maze Runner, for example, I couldn’t understand why none of the boys thought to climb the vines on the maze wall and look down from the top instead of going inside. Granted, some of those monsters could climb, but the boys would have had better odds and been able to see where they were going.

“#19 This is actually a Thing; they have to teach you to look up if you join e.g. the military. We’re a savannah animal (is how I heard it) and used to threats coming at us from left, right, front, and rear. Not much from above.

When I played various live role play games, I proved this to my heart’s content — if you climb up above head level, the majority of people don’t look up at you, no matter that they KNOW a game “threat” is somewhere close. Movies are truer to life than you’d think, here.”

Thanks, Mary. Now I understand.

Other Comments on Annoying Movie Scenes

A few other comments made me chuckle. On Item #4, a man suggested that I go to a different chiropractor. But you don’t have to be a killer to understand the spine and how it works. That’s what chiropractors do. 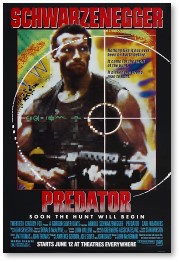 And I got arguments about Item Item #11, from people who have been in fights, usually military or law enforcement but not always. They said that adrenaline can keep you going so that you don’t even feel the wound until someone points it out. Like in the 1987 movie Predator, where Poncho tells Jesse Ventura’s character, Blaine, “You’re bleeding, man.” Blaine replies, “I ain’t got time to bleed.”

That works during the action. But later, when the injured man is lying in the hospital, hooked up to monitors and with tubes running into his arms, it’s just unrealistic that he can pull out the tubes (somehow these never include a catheter) and leap from the bed to return to action. The adrenaline is long gone by then and his body would be in full recovery mode, which usually means weak as a kitten.

So that’s the current list of annoying movie scenes. Given the responses, I’m going to modify it a bit on Quora—take out the items where I was wrong and add some new ones. Given Hollywood’s propensity for action at all costs and lack of attention to accuracy, there will always be things that annoy us.