Father’s Day makes me think, as always, of my dad, Hervey Boucher. Our son once said he looked like the “quintessential forties man” and I think he really got that right. Dad, with his fedora hat and the pipe he smoked for many years, looked like he had stepped out of a movie. In another way, however, Hervey was a man of the future: my dad the innovator. 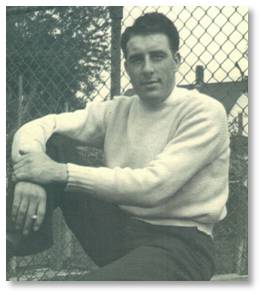 Hervey Boucher as a young man

A stationary engineer by trade, he operated Turbine #3 at the Montaup power plant in Somerset, MA, but he should have been a news photographer or cameraman. He was a good photographer and even shot photos for a Coca Cola advertising spread. He set up a darkroom in the basement where he—and later my brothers—developed the film he shot. I can still smell the chemicals, see the red light, and watch the image emerge like magic as paper swished about in the pan before being hung on a line to dry.

Later he got a movie camera and took pictures of anything and anybody that interested him, particularly places away from home. When something happened, his first inclination was to grab a camera and start shooting. An early adopter of new products and materials, Hervey would have made a name for himself, if he’d only had access to a digital camera and a Pinterest account.

Those technologies didn’t exist when Dad was alive, unfortunately, but he made the best use of what did. At heart he was a handyman, a tinkerer, an innovator and an inventor. No connector, coupling, bolt, gasket, cotter pin, or hangar was safe from his constant desire to make it better, fix it up, mark it clearly, adjust it, tighten it, or replace it. When he combined new products with his engineer’s thinking and handy skills, he made our house in Somerset green and energy efficient before those terms had been invented.

Going into this space was an unusual experience. You would slide the door open to the left and step in, the slide the door shut again. Next you opened the slider to the right, stepped outside and slid it shut again. Someone joked that it was like going through the airlock on a spaceship. After that we all just called this vestibule the airlock. It must have been weird for someone unfamiliar with the house to overhear a comment like, “Mom made a blueberry pie and put it in the airlock to cool.”

Hervey always had projects to work on around the house. Some of them were big like the kitchen and bathroom renovations while others were small projects and maintenance upgrades. There were always tools being used, sawdust in the air, a hammer pounding, and brushes held upright in paint thinner by a holder he made out of a wire coat hanger. He never threw things out if he could help it. When a broom wore out, he would cut off the straw head and save the handle in the basement because you never know when you might need a big dowel. 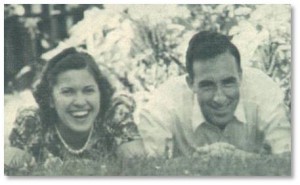 Once, after Mom had passed, I asked him why there were only three matching chairs to go around the solid maple table that we ate on for so many years. Dad looked a little sheepish and said that he had been using one to saw a two-by-four and the electric saw had slipped and ruined the chair. I could tell by his expression that Mom had not been pleased by this accident with her furniture.

Dad was always thinking of new and innovative ways to do things, both in the world and around the house. He read Popular Mechanics and Popular Science. With a better education, he could have done so much more but the Somerset Public Schools of his day did not give him a solid education in the English language. That made him self-conscious about expressing himself.

When I got older he would ask me to write letters for him to try and promote some of his ideas. Once he had me write a letter inquiring whether Hansen’s Disease could be used to combat cancer because one destroyed human cells while the other grew them out of control. He never received an answer to what then must have seemed a radical—if not downright ridiculous—proposition. Now, of course, researchers are testing the polio virus to target cancer cells and kill them quickly without side effects. 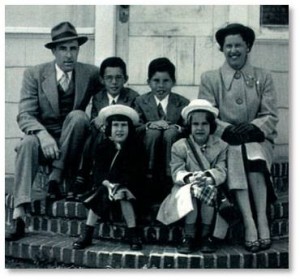 Hervey wasn’t just an innovator, a man of his time and ahead of his time—he was waaayy ahead. In today’s world with more opportunities and more technology he might have achieved great things. But he worked at a job that allowed him to support his family on one salary.

We lived in a nice house, had plenty to eat, and always had a car (only one for six people!), usually a Buick. We went on vacation every year, driving up and down the East Coast from Quebec and Nova Scotia to the Blue Ridge Mountains of Virginia. During these trips we saw historical sites and engineering advances and his movie camera got full use.

Hervey Boucher loved his wife and children. He was a good provider and did the best he could for and by us all. That counts as a great thing in my eyes, as well as something to celebrate this Father’s Day and every Father’s Day.

2 thoughts on “My Dad the Innovator”