I resisted the Wordle craze for a few weeks but eventually gave in. Watching my friends post their scores on Facebook every day made me think that (1) I was missing something good; and (2) I could probably ace this thing. 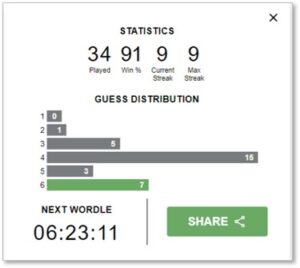 Hah! Pride goeth before a fall.

Yes, indeed, I was missing something and I’m glad I jumped into the Wordle pool. But, no, it’s not that easy and I’m not acing it. As a writer, I think of words as my friends. It turns out those friends can be fickle.

Lest you think I’m doing badly, however, I usually crack the word in four tries, sometimes in five or six and, on a few occasions, in three. As you can see from my score card, four is my sweet spot.

Where Did Wordle Come From?

Software developer and former Reddit employee Josh Wardle created the web-based word game during the pandemic, as a way for he and his wife to pass the time. He released it in October of 2021.

Wordle spread quickly and became so popular that now more than three million people play it every day. This year the New York Times purchased it for an “undisclosed seven-figure amount.”

The Benefits of Wordle

Wordle gives me a quick break in the day, when I can abandon work, worries about the world, concerns that the economy is tanking, and outrage about Russia’s war on Ukraine. For a short time, I can focus on just those five boxes,

If you click on this, then go to Facebook and paste, your blocks will show so your friends can see how well you did and, you hope, be suitably impressed. Wordle also keeps track of your scores and shows you how many times you won in 2, 3, 4, 5 or 6 tries.

Warning: Correct letters may appear more than once.

Sometimes the right word will just pop into your head. More often, however, you will stare at those blocks and feel like a blockhead. Don’t say I didn’t warn you. 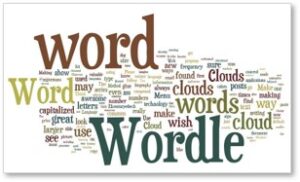 One strategy says to start with a vowel-rich word like adieu or media but I usually start with a good combination of frequently used letters to give me the best result. My favorite is steam. Then I take the information Wordle gives me—green, yellow and gray—and try again.

Now. I have a pretty good vocabulary, so I sometimes run out of blocks before I run out of words—you get six tries. Sometimes, I’m just too impatient to spend enough time finding the right word and go for five instead of working the puzzle. When all the vowels have been eliminated, the solution gets more elusive.

If you like words and puzzles, Wordle is fun. Besides, you can only do Wordle once a day, so it doesn’t pull you in for hours.

Up until now, I had a pretty good track record of ignoring online games as time-wasters I couldn’t afford. I never opened a farm, crushed a candy, or pacified an angry bird. I took the same approach to Wordle when it appeared, seeing just another distraction I didn’t need.

Then I tried it and I was hooked. Despite a fairly simple appearance—no flashy colors, animations, blinking lights, or music—Wordle reached out and grabbed me. 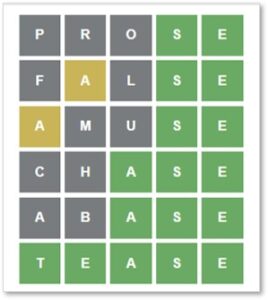 Now I look forward to my little Wordle break at some point during the day. Except on the days when I just can’t get the right letters in the right order. Like yesterday.

I got four rows in and then left to do other things, thinking the word would come to me at some point. It took until the end of the day to arrive.

Despite entering some excellent words, I blew it. Given that I knew the last three letters from Row 1, I should have had this one in three. But it took me five. Go figure.

Oh, well. I can always look forward to tomorrow.