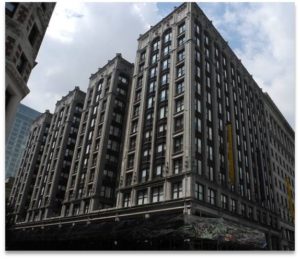 Sometimes I just go into a building I have walked by hundreds of times and get surprised by finding something totally unexpected. One such place is the Little Building on the southwest corner of Tremont and Boylston Streets.

The Little Building doesn’t stop you in your tracks with innovative architecture or elaborate decorations. You would probably not think twice about it when walking past on the sidewalk. Inside, like opening a Faberge egg, you will find a surprise—a series of historical murals

Although it is now an Emerson College dormitory, the Little Building was designed by Clarence Blackall, who designed as many 300 theaters, 15 of them in the Boston area. These include the Colonial (1899-1900), Modern (1913), Wilbur (1914), Scollay Square Olympia (1915), and Metropolitan (1924, later the Music Hall and then the Wang Center In 1889 Mr. Blackall helped establish the Boston Architectural College as a club for local architects and as a training program for draftsman. 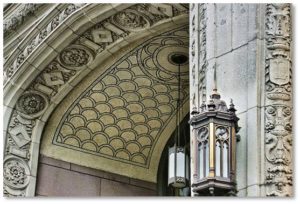 In 1917 John Mason Little, a wholesale dry goods merchant in his father’s firm, commissioned Mr. Blackall’s firm of Blackall, Clapp and Whittemore to design a new building on the site of the old Pelham Hotel at the corner of Boylston and Tremont streets

Mr. Little traced his ancestry to Thomas Little, a Plymouth colonist of 1630, and to Richard Warren, who came over on the Mayflower. He was graduated from MIT in 1868.  Mr. Little served as President and Treasurer of the Boston Chamber of Commerce. After his father’s death in 1889, he served as trustee for the family’s real estate holdings in the Pelham Trust. He and his wife lived at 122 Marlborough for a while before moving to 317 Dartmouth St. 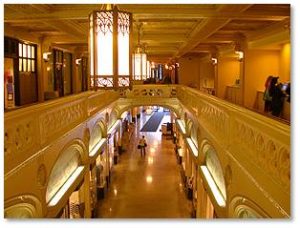 The arcade from the second floor with the demilune murals

A 12-story office building, the Little Building is ironically quite large, especially for its time, with a Tudor-arched, two-story entrance on Boylston Street. A ground-breaking “skyscraper” building in the Modern Gothic style, it was advertised as a “City Under One Roof.”

The Little Building originally held 600 offices, 15 stores, 22 shops featuring “distinctive and correct merchandise,” a Post Office, restaurants including an Automat in the basement, a subway entrance, and an arcade of shops on the ground floor,

An interesting structure in itself, the two-story arcade runs north and south, connecting Boylston Street on the north and Allen’s Alley on the south, with a Tremont Street entrance midway. Both the arcade and the interior vaulting remain intact, along with one complete shop interior and storefront. Like the rest of the building, the arcade was restored by Emerson College after its purchase in 1994.

The real hidden gem can be found in demilune murals that run along the tops of the shop fronts. In bright colors they depict scenes heroic and mundane, political and commercial.

The murals do not appear in chronological order of event. Starting at Boylston Street you see:

At the end of the arcade  a very large mural of the Little Building in its heyday. takes up almost the entire first floor wall. It has no signature. I have spent some time trying to discover who painted these murals but they remain stubbornly anonymous. The style reminds me of murals that I have seen in a restaurant but I can’t pin down where. 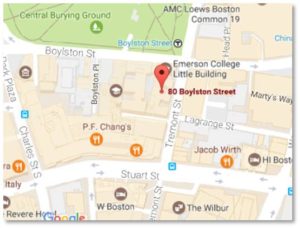 You can reach the Little Building easily from the Park Street, Boylston, and Arlington MBTA stops. The closest parking is at the Boston Common Garage.

Security Note:  Because the Little Building is now a college dormitory, it has appropriate security. You can walk in and view the murals in the first half of the arcade. After the midway checkpoint, however, you must be escorted by someone with security clearance to see the rest.

1 thought on “The Little Building’s Arcade and Murals”