Like the area round it, Lincoln Wharf has had multiple purposes and was re-invented as the times changed. During its long life, Lincoln Wharf has been long and low, tall and blind, industrial and gentrified, and open to both city and sea.

It began as a general-purpose dock in the late 1700s, serving fireboats, steamships, transport vessels, and carriers of raw materials for manufacturing. 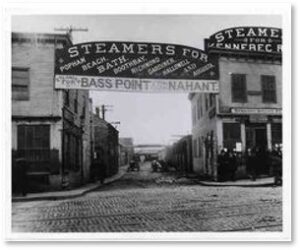 From Lincoln Wharf in 1899 you could catch a steamer for a quick summer escape to destinations along the Massachusetts coast. The Steamboat Massachusetts carried passengers and light freight from Boston to Beverly on the North Shore with stops at Nahant, Marblehead and Salem.

Lincoln Wharf also served as a point of entry to Boston for thousands of Canadian immigrants, mainly from the  maritime provinces. that meant immigrants coming to live in the city probably walked past prosperous Bostonians on a summer outing.

There was nothing special about Lincoln Wharf back then. It was one of the 30 or so wharves that served and powered the city, providing raw materials as well as transportation, jobs, and food for Boston’s residents.

It wasn’t as long as 2,000-foot Long Wharf and it didn’t handle elegant clipper ships. Lincoln Wharf was as nitty-gritty a workaday location as its address on Commercial Street. It did sport a large sign advertising “Steamers for Bass Point and Nahant” but otherwise it stuck to business. 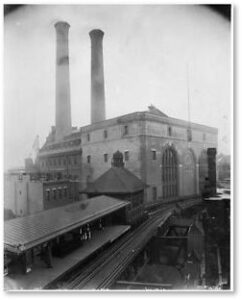 The Boston Elevated Railway Company changed all that when they chose Lincoln Wharf as the site for a coal-fired power plant for their new Boston Street Railway. The Lincoln Power Station was big—very big—and it occupied more land than was available. The company drove 12,000 wooden pilings through tidal fill to support a 10-story, windowless brick building and two tall brick smokestacks.

The Boston-based engineering firm of Sheaff & Jaastad, which specialized in electric power and lighting plants, designed the enormous structure. The plant included a large shed at the water’s edge to store the coal that was brought in by ship.

Going on line in 1901, The Lincoln Power Station served the company’s Atlantic Avenue Line and provided supplementary power for the Downtown Boston elevated and surface lines.

In 1907, increasing demand drove construction of a massive addition in the “rear” of the power station, facing Commercial Street. This structure, another cube, had the triple arched windows we see today. The Lincoln Power Station operated until 1971, when the Massachusetts Bay Transportation Authority (MBTA) removed all the elevated tracks the Lincoln Power Station had powered. The MBTA then sold the power station to a private developer for housing.

The Lincoln Power Station held a sign with its name on the building’s north side. Due to developers creating new windows, it now reads, ” This sign now reads “LINCOL  OWER  S      N 1901.” Oh, well.

BAT transformed a 150-foot brick cube into a “luxury” residential condominium building. Notice how smoothly low-income slid right into luxury. As part of the development agreement, about one-quarter of the 191 units were sold as “affordable” while the rest were sold at market prices. No “affordable” units exist as such today, and are assessed and sold at market prices. 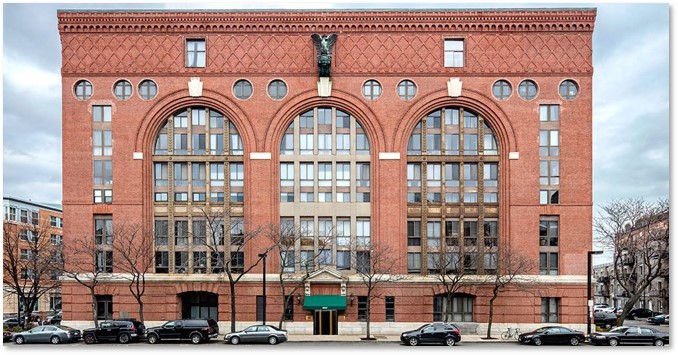 The renovation required extensive interior demolition of the existing steel structure, coal bins, and electrical generation equipment. They also had to manage the controlled explosive demolition of the two smokestacks.

Lincoln Wharf could have turned into just another soulless box like the glass towers in the Seaport. Instead, the architects added windows—lots of them—to open out the building and take advantage of extraordinary sea and land views. With Boston Harbor on one side and the North End on the other, residents can’t lose whichever way they look.

The Boston Architectural Team—which also renovated Lovejoy Wharf, Clippership Wharf, Battery Wharf, and the Baker Chocolate Factory complex—made the most of the three soaring Richardsonian Romanesque arches and put a row of round windows above them . They added a granite string course above the first floor and created latticed brickwork under the cornice. The cornice itself has marvelously detailed rows in a neo-Panel Brick style. A 10-foot-tall copper eagle was retained and decorates what is now the “front” of the building on Commercial Street. 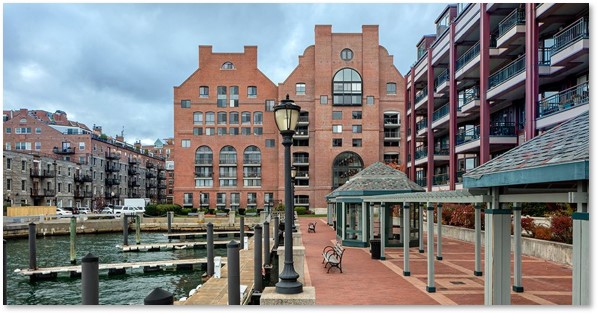 The architects solved the problem of the immense depth in the building’s original footprint by grouping the floor plan around a new atrium to provide light, air, and views to internally situated units. When the Pandemic is over, I plan to check this out.

The Lincoln Wharf is now a 10-story, x-floor brick and stone residence along the waterfront between Battery Wharf and Union Wharf and adjacent to Burroughs Wharf. You can’t see it but the Sumner Tunnel, which connects the North End to East Boston, runs partly beneath it.

A one-bedroom unit in Lincoln Wharf sells for a median price of  $452,689. Two bedrooms will take you over a million and then up. Not exactly low-income but, for that, you get a piece of history along with your condo.

3 thoughts on “Lincoln Wharf: From Steamships to Condos”