There are leftover lovers and leftover evaders. I’m in the first category, and since we’ve just celebrated one of the biggest leftover-producing meals of the year there are plenty of them stashed in the fridge waiting for their second coming. 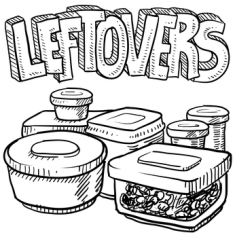 I come from a leftover family. Mom always cooked extra and as the family began to downsize she didn’t know how to scale it back. We always had a round two, and most of us (there was one avoider among us) enjoyed really good lunches.

In a large family not everyone likes same thing, so we always got multiple choices on the sides and generally one alternative to the meat offering. When ham was served, we had a pasta option and if turkey was on the table ham got invited to the party. Therein were the makings of some great leftovers.

As the kids left home Mom cooked as if everyone still lived there. Growing up during the depression she knew what it meant to be hungry and poor. My mother sat on the leftover throne and I learned at her feet. She understood how to re-purpose a meal and I looked forward to the leftovers almost as much as the original offering.

Leftovers have been around for a long time, we just didn’t have a name for them. There was no word to describe food that carried over from one meal to the next but people had all kinds of ways to stretch the weekend roast or chicken into a second meal. Think noodles, rice and potatoes. 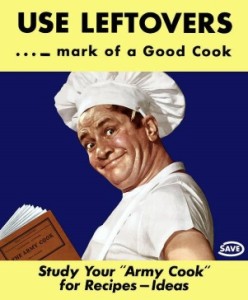 Back in the day, nothing was wasted, but the idea of a leftover becoming a second meal and actually being called a leftover came into its own around the turn of the twentieth century. Using leftover food became a measure of a cook’s ingenuity.

Between the 1930s and 1950’s refrigeration came along, and that changed everything. Cooks that relied on preservation techniques like canning, smoking and pickling now had cooling to extend the life of prepared food.

Working with leftovers to transform them into an altogether new dish became trendy in middle class households in the nineteenth century. In all likelihood these creations are responsible for the comfort and longevity of the casserole. I personally consider leftovers a culinary challenge and maintain that many of them taste better the second time around.

The Second Time Around

There is no such thing as a leftover-leftover. You get to heat up your leftovers once and only once.

A few words of caution are in order. When you’re reheating, take out only what you plan to eat. Leave the rest in the fridge for someone else if you are dining solo. Heat them to 165 degrees F to kill off any potential food-borne bacteria. If you don’t finish the serving, toss it out – never put in back in the leftover container.

Not cooking food to a safe temperature and leaving food out at an unsafe temperature are the two main causes of food-borne illness. Hot food must be kept at 140 degrees F to prevent bacteria growth and should never remain out for more than two hours. Cold dishes, especially those incorporating mayonnaise or deli meats, should be kept at 40° F or below.

When storing leftovers, wrap them in airtight packaging or seal them in storage containers to keep bacteria out, retain moisture, and prevent them from picking up odors from other food in the refrigerator.

The Art of the Leftover

There was a time when leftovers made us think of a less-than-exciting meal but not anymore! Flavorless reheated food lacking in color, texture and appeal has been replaced by artful presentations and combinations. There is even a cookbook genre for leftovers. 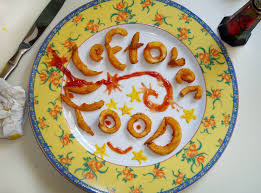 Rising food costs and increased awareness of wastefulness are two good reasons to use what you have. Job losses, higher living expenses and medical costs all factor in to how we manage and spend our money.

I call it cooking to the pantry. When it comes to the food budget, a weekly inventory of what you have on hand in the cupboard and refrigerator can be used creatively. With a little imagination and the internet, leftovers achieve an elevated status at the table.

Wonderful meals have humble beginnings in a stock pot with a few stalks of celery and the bones from a roasted chicken. Words like tetrazzini and au gratin are great stepping off points for leftover veggies and poultry. No rules.

Leftover inspiration is within your reach – probably just a refrigerator container away!