It is one of my guilty pleasures and now I’m going public with it. I’m talking about standing in the checkout line at the supermarket and reading the tabloid headlines. I cannot look away. While I am waiting my turn I read the headlines and am drawn into the scandals, notoriety and misdeeds of celebrities, children of celebrities and people who wish they were celebrities. 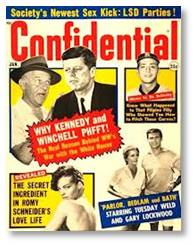 This is where I get the scoop – the real truth behind Jen’s weight gain, Hillary’s plot to put Bill back in the White House, and Kim’s latest selfie. Catching up on Hollywood gossip, finding out who went to rehab, and seeing photos of aging celebrities without their make-up add a reality check to my life.

Chances are, I am also not wearing make-up but there is not a photographer to be found. As I stand in the line I am captivated by the world of tabloid sensationalism.

The tabloids are a cultural mainstay. The majority of us will never admit to buying them, much less reading them. I limit my exposure to the supermarket and an occasional article at the hairdresser if she’s running late. The truth is, these tacky newspapers offer us a glimpse into celebrity gone wrong and give us a window into the lives of men and women who would otherwise be invisible to people like you and me

People who have become entertainment icons are really no different than the rest of us when it comes to failed relationships, annoying habits, bad fashion choices and a desire for privacy. The difference is, we get it and they don’t. The other difference is that these papers never permit the facts to get in the way of a good headline. Everyone knows that if you read it in the tabloids it must be true. Showcasing celebrity sex, drugs and rock and roll in a full-color close up is their bread and butter. They pander to our fascination with people in high places who fall from grace in a public and humiliating way. It sells a lot of papers.

Tabloid journalism has always been marked by the challenge of what defines the boundaries of acceptable journalistic and investigative behavior. The tabloids separate themselves by regularly testing these boundaries and not apologizing for it. The more unbelievable the story, the more we are drawn to it. They test the limits of what is ethically or legally acceptable and see it as serving the public’s desire to see what lies behind the closed doors of celebrity lives. They rely on the appeal (a very human one) of seeing a glimpse into a private life that would normally be hidden from view. Today everyone is considered fair journalistic game.

Then we have the Kardashians. You cannot pass a magazine rack or visit online news sites without seeing the word “Kardashian” in print. Their notoriety has become a family affair and a media dream. Mother, daughters, son-in-law, baby daddies and even the stepfather get steady and largely self-generated tabloid press. Media coverage of their lives includes a reality television show (now in its eighth season) that chronicles their over-the-top lifestyle. There is no actual intellectual or social value to this family let alone reality–it’s merely materialistic self-idolizing.

Many years ago a man named Daniel J. Boorstin wrote a book called The Image: A Guide to Pseudo-events in America. In it, he defined celebrity as “a person who is known for his well-known-ness.” The twenty first century tabloid culture has given the likes of the Kardashians time and ink to create their own headlines and personify this definition. 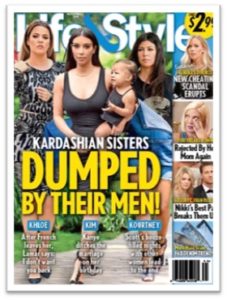 During a Skype chat with my BBFF Jan (British Best Friend Forever) I was talking about this blog and mentioned I was including the Kardashians.

Jan: “What exactly are they famous for?”

Me: “Nothing. If they had five more brain cells between them they could be Brussels sprouts.”

Jan: “That’s kind of unfair to the sprouts.”

She has a point.

When I leave the supermarket I am oddly reassured by the fact that there is a celebrity out there with more cellulite on her thighs than I. It is comforting to know that in the age of infamous excess I have managed to raise children who have a good self-image, no chemical dependencies and are gainfully employed. In the tabloid world of infidelities, public failures and material indulgence I am happy that our children want to make a meaningful contribution to this world and good use of their gifts and talents.

Leaving It All Behind

As I leave the checkout line I also leave behind me the lifestyles of the rich and famous and the down and out. The Kardashians reassure me of my good fortune and many blessings and offer a reminder that my life is the best of all possible lives.

I’d also like to offer my apologies to the Brussels sprouts.