Skip to primary content
My Boston by Foot docent training started on April 6 with a four-hour orientation tour of the city.  On Saturday we had a class on Colonial Boston followed by a tour of the Heart of the Freedom Trail given by a docent trainer. This morning I finished my first paper, an analysis of the Georgian style of architecture as seen in three buildings: the Ebenezer Clough house, the Old Corner Bookstore, and King’s Chapel. 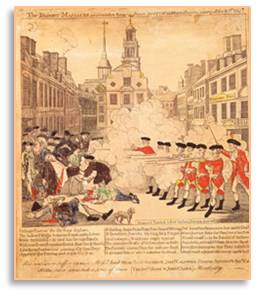 All this research, combined with hours spent walking around the city, looking at old buildings, listening to stories of early inhabitants, and examining historical landmarks, has given me a keener sense of the city and its part in the founding of our country. Monday’s terrorist attack struck deeper than it might otherwise have done as I saw the damage it did to buildings, to innocent people, and to our local psyche. The training activities also reinforced, however, that there is a history of violence in Boston.

Boston Massacre:  On March 4, 1770, an altercation turned into a snowball fight on King Street (now State Street) just below the old State House. It became a bloodbath when Captain Preston of the 29th Regiment arrived with eight Redcoats to reinforce a Private White, who was on sentry duty. The crowd, now swollen to several hundred people, turned ugly as troops forced their way through, and pelted them with snowballs and rocks. When a club thrown from the crowd struck Private Montgomery in the face, he retaliated by firing the first shot. More shots were fired and, when the smoke cleared, five colonists lay dead or dying.Boston Tea Party:  On December 16, 1773, members of the Sons of Liberty dressed themselves as Indians and marched on three ships that had recently carried tea to Boston. The Dartmouth, the Eleanor and the Beaver carried a cargo that was subject to the recently enacted and odious tax on tea. This action was the culmination of months of dissatisfaction with taxes over which the colonists had no control and which did not benefit the colony because it served only to repay England for the expensive French and Indian War. The Sons of Liberty vowed to turn Boston Harbor into a teapot. Shouting that “taxation without representation is tyranny,” they boarded the ships and threw crates of tea—worth $1.3 million in today’s dollars—overboard. 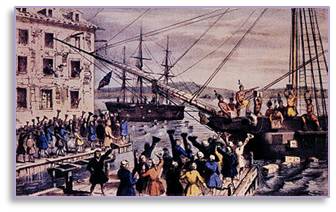 These were acts of rebellion, not terrorism, however.  More blood would follow as the American Revolution began but a new country would emerge from that war. The British Regulars and their mercenaries, the Hessians, fought the Colonial Army with guns and cannons. Both sides wore uniforms (at least, when the Colonial Army could afford them).  There were rules of conduct and rules for treating prisoners of war. Civilians surely died, women and children among them, but that was not the main goal.

Today, terrorists of whatever stripe or faction don’t dare fight a standing army. Instead, they target the innocent with the goal of killing as many as possible. In Africa, men fight wars by raping women and enslaving children, not by fighting other men, much less armed soldiers. One studies history to learn from it but what we are learning now is that the only way to fight these cowards and psychopaths is to refuse to bow to terror. This afternoon, a neighbor asked me if I was rethinking being a tour guide in Boston. I replied that I am more determined than ever. On Saturday we study Federal Boston and I’m looking forward to it.