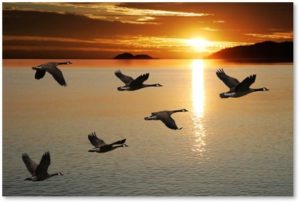 Here’s your assignment for today.

I predict that you will see—nothing. The sky is empty.

It takes a while to recognize something that is no longer there. Whether it’s bugs on the windshield or birds in the shrubbery, we’re losing whole slices of Earth’s flora and fauna.

Some Examples of Missing Birds 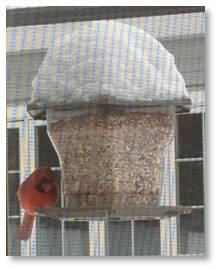 When the bubble is off the pool in the summer, I love to look up while I do water aerobics and watch the birds. This year I saw almost none, not even the fish-eating birds like great blue herons and ospreys. (The Sudbury River is nearby.) Only the hawks seem to be prospering, but that’s because they feed on chipmunks, squirrels and rabbits.

The mourning doves used to fill summer afternoons with their repetitive coo. Sometimes I found the sound annoying it went on so long. No more. Fewer doves make for less birdsong, repetitive or not.

The wild turkeys, which are usually forming winter flocks about now, haven’t shown their feathers. We have had up to 60 turkeys in our front yard. So far this year, nada.

Seagulls eat human garbage and have learned to snatch food right out of our hands. The perching birds, the songbirds, and even the ducks, have fallen away, however.

Starving and Poisoning the Birds

It only makes sense. If there’s no food, the birds starve and they don’t raise new fledglings. In our mania to exterminate pests, we have also poisoned whole populations of other insects. Because of the threat of Eastern Equine Encephalitis here in New England, the state has sprayed insecticides to eliminate mosquitoes.

Rachel Carson warned us this would happen with her prescient 1962 book, “Silent Spring.”

“On the mornings that had once throbbed with the dawn chorus of robins, catbirds, doves, jays, wrens, and scores of other bird voices, there was now no sound.”

I would add that the evening flutter and twitter of birds returning to the nest has stilled. The afternoon bird calls have gone silent. The sky is as still as it is empty. 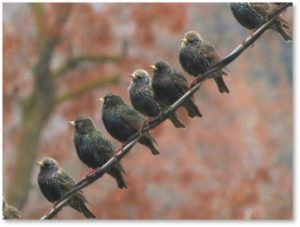 For a while, we listened to Ms. Carson. We became environmentally conscious and paid attention to how we treated the birds. We stopped throwing rice at weddings and releasing celebratory balloons. We protected wetlands with strict laws and prevented loss of some habitat.

The Case of the Missing Birds

According to a study published last week in the journal “Science,” there may be almost three billion fewer birds in North America today than there were in 1970. The National Audubon Society says that 25% of U.S. birds are in decline. The State of the Birds 2014 U.S. report gives a list of 30 common species which are in steep decline. There has been a similarly large decline in the numbers of migrating birds. That’s billions with a capital B. If the U.S. population suddenly lost three billion people, we would be in crisis.

Here are the 32 missing birds in 12 species:

What changed? Aggressive agriculture came along with its state-of-the-art poisons.

Neonicotinoids are a group of insecticides used widely on farms and in urban landscapes. They are absorbed by plants and can be present in pollen and nectar, making them toxic to bees as well as other insects. Research clearly shows how neonicotinoids are killing bees or changing their behaviors. 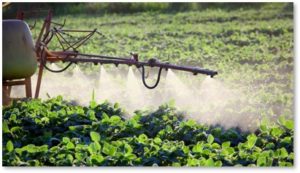 Just like nicotine, the neonicotinoids act on certain kinds of receptors in the nerve synapse.  They are water soluble and applied to soil, where they are taken up by plants.

The neonicotinoid insecticides are much more toxic to invertebrates, like insects, than they are to mammals, birds and other higher organisms. But birds eat those insects and absorb the poisons, which gets concentrated in their little bodies. The poisons also accumulate in waterways, which interrupts the larval stage of many flying insects. Neonicotinoids also make it more difficult for birds to put on the weight they need to be strong enough to migrate.

Once again loss of habitat shows up a cause of the problem. When the birds have nowhere to live, nowhere to nest, they can’t prosper and reproduce. We have replaced trees, fields, hedgerows, and meadows with our own environment: Buildings, roads, factories, battlefields, dumps, mines, oil fields, oil spills, and huge mono-culture farms. Birds do not do well in these places.

Does it matter if we no longer share Planet Earth with the birds? You bet it does.

The Audubon Society has a list of ten things we can do for the birds. Read through it and then do what you can. Our grandchildren may grow up without waking up to birdsong or going to sleep with the twitter of birds. They may never see flashes of blue and red and yellow in the sky. Birds nests may become things they see only in museums, not find under a tree.

All that, so we can grow more corn and soybeans and never have to fear a mosquito bite. Now that’s sad.