AK Note: I was away for the weekend so Susanne’s usual Monday post appears today.

Aline’s recent post The Ghosts of Employment Past and Present got me thinking about The Ghosts of Past Employers. Sometimes we give each other blog inspiration. That’s how we roll.

I’m thinking about this for a couple of reasons. Today I am starting a new job (#soexcited, #bestjobever) and that got me thinking about my old job. My new company fosters a culture of team work and places high value on human capital. In Aline’s post she references the “uplifting work conditions” that impressed Dickens. I looked for the same vibe when I was interviewing. My networking revealed more of the “desperate and easily replaced workers” value system found in the mills. I wondered if I would find the employee-centric culture that was so important to me. I feared it had been replaced by the depersonalized and expendable human unit.

What I found most often was a large gap between how companies did operate versus how they should operate in an organization that is built around human capital. Companies will tell you they are committed to finding and developing the right people but it’s more of a statement than a practice. It’s getting harder to find the real deal and it’s discouraging to job seekers and employees. Management by walking around (MBWA) is becoming a lost art.

I liked my new company from the moment I met them. I wanted to work there. I could feel the energy and the synergy of the team I hoped to join. I was a final candidate for the position and the decision was going to the person that best fit the corporate personality and culture. Which is the reason I am no longer at my old job.

During the five years I worked there the company evolved, the management changed and so did its culture. New management means a new direction and in all likelihood a new culture. The culture that was there when I started no longer existed. It was replaced with a management team that did not consider the existing human assets to be of value when they redefined the company. In part because they did not know them and in part because they did not hire them. It happens.

But there are things about my old company that I liked. I liked the old culture – the one that made me say yes when they offered me the position. It’s the same reason I said yes to the new job. They value the people. They get it. During the interviews my accomplishments stood on solid ground. The big question was how effectively I could build relationships, promote and practice collaboration, and mentor junior associates. It was a culture question and one I was happy to answer. We were on the same page. 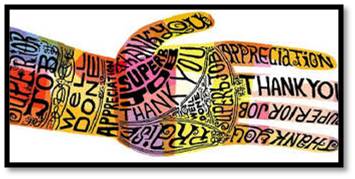 Two of the most important words in the English language are Thank You.  Two little words that are really two big words.  It’s easy to say and easy to forget.  These two words are high-dollar currency in all aspects of our daily lives, but in a work setting they make a significant contribution to the corporate culture and employee morale. They make a huge difference to me.

One thing my old company did right was employee recognition. They gave bonuses. Depending on the year and earnings they had a bonus program. It was a company-wide initiative, nobody got singled out. Depending on where you fell in the hierarchy, you got a little money and others got a whole lot more. One year I bought a Kate Spade handbag with my bonus; the CFO bought a new Mercedes and redid his kitchen.

They also practiced individual recognition. Acknowledging an employee for something above and beyond what is expected is the right thing to do. It builds morale, confidence and loyalty. You work harder because you want to.   Recognition doesn’t necessarily replace the company bonus plan, but it establishes something personal and meaningful within the culture. My old company did this with a Night on the Town certificate – an invitation to enjoy a night out at the company’s expense. The employee received a $100 gift certificate that summarized the accomplishment, and it was signed and presented by their manager. It was a cost-effective and personal way to say thanks.

The first time I received the award I was recognized in a staff meeting. Several of my peers and I were singled out for accomplishments related to a specific set of deliverables. It was accompanied by a hand-written note of thanks from our manager and it felt really good.

The second time I was merely the delivery vehicle. The hand- written note and certificate were presented to my husband, in recognition of his support during a challenging and ultimately successful event that took six months of 60+ hours a week. I spent more time at my office than my home. My manager’s willingness to recognize the invisible support that contributed to my success lives in my memory as one of the best thank-you gifts ever.  It doesn’t get any better than that.

It seems like a simple concept:  Make an employee feel appreciated.  In the corporate culture there is a disconnect between the type of appreciation employees want and what their managers think they want.   Managers rank promotions and cash bonuses as the two most effective ways of recognizing employee accomplishments–and they are–but an in-person thank you or a job well done reported to senior management is just as important and has a big return on the investment.  It does not require forms, signatures or upper level approval.  The words are free and can be used any time, any place and anywhere.

What if we all decided to say thank you to our staff, to our peers and to our management?  What if we thanked them on a regular basis?

These two words can make a world of difference to the person speaking them and the one hearing them.  A public high five to a deserving employee recognizes accomplishment and goes a long way towards creating a culture that values and promotes human appreciation on a regular basis.

Have you thanked someone today?

1 thought on “Employee Recognition – Thank You for Thanking Me”