It sometimes seems as though superhero movies have taken over the science fiction genre like the creatures in Invasion of the Body Snatchers, who look just like us, who used to be us, but who are now aliens intent on replacing us. As I reported in a previous post, “Officially Burned Out on Superheroes,” I’m really done with the formula that has driven these movies to great success. Yes, as a kid I read all the superhero comics and enjoyed them. As an adult, I sometimes wish for a superhero to appear and save us from ourselves by, for example, cleaning up the great Pacific garbage patch. Aside from that I’m happy to live without them.

Hollywood can do real science fiction when it wants to, and do it really well. Whether it’s the mystery of Moon, the verisimilitude and tension of Gravity, the suspense of Alien, or down-dirty grittiness of Outland, the movies can take us into space and back again or bring the shock of other races down to earth. 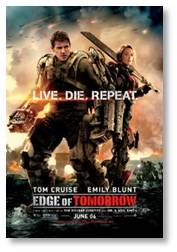 Edge of Tomorrow does the latter. It succeeds on all fronts and deserves the critical kudos it has been receiving. Here’s what it does well:

@EdgeofTomorrow opened in third place to disappointing box office numbers. It brought in only $29.1 million domestically on its opening weekend—far less than Warner Brothers was hoping for. A big-budget action movie that’s aimed at the young male audience, with an A-list star and a $175 million production budget typically set $100 million as its benchmark.

Some are wondering whether Tom Cruise is past his sell-by date as an action star. His only big hits over the last five years have been in the Mission Impossible franchise. In The Wall Street Journal, Ben Fritz wonders whether “Tom Cruise Will Hurt Edge of Tomorrow.” That question would have been unthinkable in the 90s.

Other industry watchers are noting that the trend for summer movies is moving toward girls and young women with films like the Hunger Games franchise, Divergent — ad even the Twilight series — appealing to a big audience that’s bored with watching boys beat up on boys or villains blowing up stuff.

The Angel of Verdun 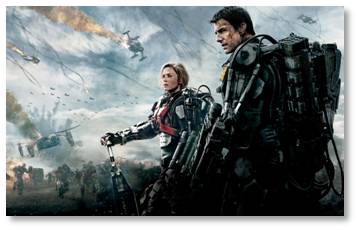 Fighting mimics on the beach

On the other hand, Emily Blunt’s Rita Vrataski is no slouch in the action department. She’s more experienced and more competent than Tom Cruise’s Major Cage. A character more like Ellen Ripley than Katniss Everdeen,

Rita is both a hero — the Angel of Verdun — who is used to rally the troops and a dedicated soldier who doesn’t quibble at making the tough choices, whether about others or herself, if that’s what going to beat the Mimics. She’s the toughest woman warrior since Jenette Goldstein played Private Vasquez in Aliens. Edge of Tomorrow is as much her movie as it is his. If you’re looking for a heroine to admire, Rita Vrataski is it.

Should you be confused about the ending when you leave the theater, or how the time looping works, check out Screenrant’s analysis by Ben Kendrick: “Ending and Time Travel Explained.” But it’s full of spoilers so don’t do this until after you have seen the movie.

If you liked any of the movies mentioned above. Heck, if you liked Saving Private Ryan or D-Day and can suspend disbelief enough to accept an alien enemy, you will probably enjoy Edge of Tomorrow. We certainly did and we recommend it highly.