Yesterday was filled with volunteer activities, one of which I mentioned in yesterday’s post on Lovin’ Spoonfuls and Community Servings.

From Mudflats to Millionaires

First, I led 15 people on a Boston By Foot tour of the city’s Victorian Back Bay. It was a popular day for the tour and I had both local folks and visitors from North Carolina, Florida, and Baltimore. This made a large group to keep intact while leading from the front so my husband volunteered to go along and make sure that we didn’t lose anyone along the way. Usually he reads while I do a tour but he was a big help yesterday. 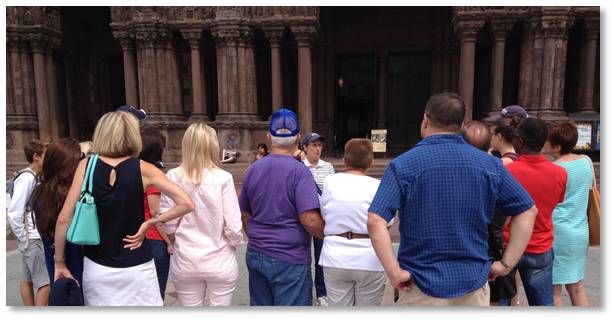 The tour group in front of Trinity Church in Copley Square

On the tour I explained how the Back Bay went from a stinking tidal mudflat to one of the country’s most prestigious—and most expensive—neighborhoods. This was a massive feat of engineering that spanned the years from 1857 to 1898 and create 570 acres of what was called the New Land onto which the Boston’s wealthy Brahmin families.

My “tourees” were a game crowd and asked a lot of good questions about many things from whether Charles Follen McKim’s design of the Boston Public Library was based on an Italian source (A: Yes, in part. It was based on the Tempio Malatestiano in Rimini, Italy, as well as the Bibliothèque Sainte-Geneviève  in Paris.)  to why Boston is called Beantown. (A: Because molasses was a by-product of the Triangle Trade on which the fortunes of many Beacon Hill Brahmin families was based. Molasses was used to cook dishes like Boston baked beans, brown bread, and Indian pudding.)

That answer raised another question about the Great Molasses Flood, which I will discuss in detail during @BostonByFoot’s upcoming Dark Side of Boston tour in the North End on Friday, August 22 at 6:00 p.m.  Come on down and find out what happened!

Food for the Housebound

When the tour was over I got a round of applause—always a nice reward—and then Seth and I headed over to Skipjack’s for a quick dinner. Then we dashed into Jamaica Plain to the Community Servings building. After an orientation and much hand-washing, we spent two hours dishing out and packaging dinners that will be taken to the homes of people who are suffering from terminal illnesses. We were part of a volunteer group from Lovin Spoonfuls, a food-rescue organization that I try to support as much as I can.

We packaged up dinners that included Tikka Marsala chicken, Asian-spiced lamb, and Cajun meatloaf with rice or potatoes and a vegetable. The chefs @CommunityServ all do a remarkable job of cooking healthy meals while taking into account 26 different allergies or dietary restrictions. The food all looked pretty good to me even though it was cold and I’m sure it’s even better when it’s piping hot.

When we go home around 8 p.m. we were tired but feeling very good about our day of volunteer activities.