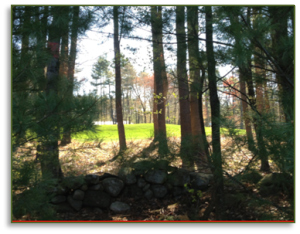 The First Green from My Deck

Last night I was catching up on Sunday’s episode of Mad Men when I started to hear a strange noise coming from the golf course.  My living room windows look across a stone wall at the first green of Charter Oak Country Club, so the golf course is pretty darn close.

I muted the TV and heard an ungodly assortment of wails, howls, warbles and other unidentifiable noises.  As I listened, they got closer and louder—much louder.

Opening the deck door, I listened to what was clearly several members of the species canis latrans having themselves a real good time on a spring night.  I fetched a flashlight and shone it up toward the green but the pack high-tailed it out of there very quickly.

Seth went to find Mystique, who had been out all day.  I had not seen her since she popped up onto the porch around 2 pm and then disappeared again.  She was nowhere to be found—probably holed up somewhere and shaking in fright—but she did return later on, safe and sound.  Maybe now kitty will rethink being out after dark and understand why we keep her inside at night.  Well, maybe not but the coyote party on the first green certainly reinforced my resolve to bring her inside before dark.

Returning to the TV, I thought that the show outside was an interesting counterpoint to the show inside.  Don Draper, raised in a brothel, is a man for whom sex is therapy and marital fidelity is an on-again, off-again concept.  This season, he’s shagging both his neighbor’s wife and his old mistress while married to his second wife. His reasons for doing so are obscure, best illuminated by series creator Matthew Weiner, as interviewed by Terry Gross on NPR’s Fresh Air.In “Matthew Weiner, ‘Mad Men’ and Meaning,” Mr. Weiner says that this season of @Mad_Men is exploring Don’s descent into hell as he realizes that he doesn’t like the way he is.  That’s good because I don’t much like the way he is, either.  In fact, I much prefer the show’s female characters—Joan, and Peggy and Megan—probably because I can identify with them.  Having joined the workforce not too long after this season’s timeframe, I know what it’s like to deal with the Don Drapers, Pete Campbells and Roger Sterlings of the world while trying to get your job done.  The growth and development of the women are the story arcs that keep me watching.Last night I had the feeling that Don Draper, as we know him so far this season, would have been right at home with the coyotes on the first green—having a good time with no worries about consequences and no remorse.  He doesn’t even shower before he high-tails it home.