Spring finally arrived in Massachusetts last week and I went outside to do some gardening. Spring only lasted for two days before Second Winter set in, so I had to get a lot done in a short time.

I went out during the afternoon to work in my perennial border, which is in full sun. Silly me. I thought it was too soon and too bright to worry about black flies and  I paid the price.

Black flies, for those of you who don’t have them, are small but exceedingly annoying creatures that make working and playing outside an absolute misery for a few months every year. Unfortunately, those are the same months we want to shake off our doldrums, take off our winter clothes, and enjoy the start of summer.

Stealth creatures, black flies sneak up on you unawares, but at times they swarm around your head and in front of your face. In either case, they aim for the delicate, thin skin behind your ears, around your eyes, and in any places you can’t reach. Black flies will also crawl up your pants legs to the skin around your ankles or inside your sleeves to reach the thin skin inside your wrists.

What are Black Flies?

Members of the family Simuliidae of the Culicomorpha infrarder, black flies are related to the Ceratopogonidae, Chironomidae, and Thaumaleidae. Got that? In your neck of the woods, you might call them turkey gnats or buffalo gnats. Over 2,200 species of black flies have been formally named, of which 15 are extinct. One might wish the other 2,185 species would go the same way. And soon.

Black fly season typically starts in the middle of May and runs through late June or early July. They’re often gone by mid-July but a cold, rainy start to summer like the one we have sloshed through in New England this year can extend the season into August. So, we have that to look forward to.

Now, here’s the rub: Black flies breed in clean, fast-moving water like streams, creeks and rivers. The only running water near my back yard is the marshy area running across the golf course, which is not fast moving or even within eye-shot. Black flies also plague the Memorial Garden behind the First Parish of Sudbury, where I work in the garden, and any running water is even further away. But, still, they persist. 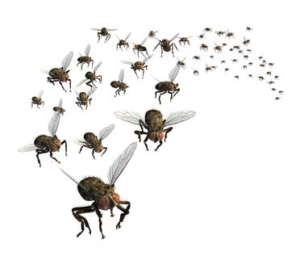 They hunt their prey (that’s us) by body heat and exhaled carbon dioxide. Dark moving objects catch their attention, as does lactic acid on the skin.

Black flies prefer the shade and shelter of woods. They often cease their attack when you step out into warm sunshine. This did not work for me last week, however, as I worked in the bright sun and got bitten anyway. They got me on the back of my neck and down my shirt along the spine, exactly where I could not reach. The welts did not appear until the following morning. I think I will have scars until July 4.

Feeding the Next Generation

Like mosquitoes, only the female black fly takes blood to feed her young. Unlike mosquitoes, they do not actually “bite” but instead scrape and stretch the skin with their tiny mandibles before sucking out the blood. This creates a welt that swells up, itches and becomes sore all at the same time.

But not right away. When a mosquito bites you, the intense itch usually warns you immediately. That gives you the opportunity to put a cortisone cream on the bite—and the sooner, the better. With black flies, however, you might not feel the bite until night time or even the next day. By then, it has already swelled up and begun to itch. I put the cream on anyway and it helped but I knew I had several days of misery ahead before the bite got better.

Methods of warding off black flies differ widely. Native Americans covered themselves in bear grease. One might be tempted but bear grease is hard to come by, smells bad and stains clothing. When prepared for black fly season, I spray my hat with Deep Woods Off, inside and out. If wearing a jacket, I spray that. Then I rub insect repellent behind my ears, on neck and wrists. Other methods include:

How to Handle a Bite

Once the black flies get you, the best thing to do is wash the area with soap and warm water. DO NOT SCRATCH. Rub in a cortisone cream. Cover the bite with a bandage if that will keep you from scratching.

Meanwhile, I’m going to buy an insect net to wear over my hat. That way I can work outside without being distracted by black flies, mosquitoes, and other nuisances. The only alternative is a hazmat suit and that’s too expensive.