Last week I saw both Wild and American Sniper, two vastly different movies that yet have a couple of big similarities. American Sniper is the better, stronger, more powerful movie but it is also set in the big arena of war with all its action, drama, suspense, and violence. With that kind of material, it’s easier to have an impact. Wild explores the open spaces around the Pacific Crest Trail, a quieter and more introspective venue. Most of the action concerns Cheryl Strayed’s struggle to carry an enormous pack on a solitary hike for over a thousand miles while confronting her inner demons.

The response to the films has been very different, but despite the myriad differences there are two similarities. Here’s a look at each film separately and then my analysis of the similarities. 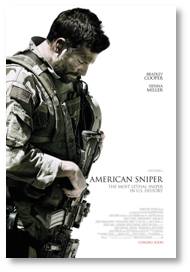 (73% Fresh / 88% Audience Like) — “Critics say American Sniper is a tense, kinetic drama that has much to say about the emotional toll of war — even if it fudges some of the facts about its real-life subject. Bradley Cooper stars as Chris Kyle, a Navy SEAL sniper who achieved near-legendary status for his fearlessness and shooting accuracy.

But when he left the service, Kyle’s place in the world became less certain. The pundits say American Sniper avoids some of the more controversial aspects of Kyle’s life, but it’s still a bracing, tense, powerfully acted portrait of a supremely talented soldier at war with himself.”

#American Sniper has been nominated for six Academy Awards, including Best Picture. It opened in limited release before hitting the multiplex this weekend so it’s hard to compare revenue on an apples-to-apples basis, but in four weeks it has earned $$93,630,000. According to ScreenRant, this set a new January box-office record, beating Ride Along’s previous total of $41 million. (This is like how the Patriots beat the Colts on Sunday’s Division Play-off.)

Audiences—particularly male audiences—are drawn to war movies where they can root for the Good Guy. We like Chris Kyle right from the start (well, who doesn’t like Bradley Cooper?) and we go on liking him, even when he’s not functioning all that well. This part is not the movie’s focus, however, and it gets short shrift in the story arc. He wasn’t really at war with himself; in fact he was at peace with what he had done. The PTSD was less specific than that.

Glossing over the personal toll of war makes Chris Kyle more like an icon than a human being. The in-country scenes have the air of a first-person-shooter video game in which Chief Kyle picks off targets one by one with audience cheering him on. American Sniper has a lot of guns and violence to keep the guys in the audience happy along with romance and family values for the gals. It’s very well made, totally engrossing and easy to recommend for people who can handle this level of violence. 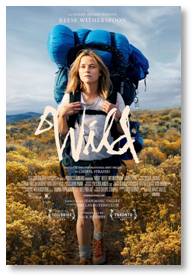 (990% Fresh / 82% Audience Like) WILD powerfully captures the terrors and pleasures of one young woman forging ahead against all odds on a journey that maddens, strengthens, and ultimately heals her.

Wild received two Academy Award nominations, both in acting categories. Movies about strong women—and Wild has two of them—are not Hollywood’s strong suit so Reese Witherspoon was the driving force behind getting this movie made. She was, in fact, so frustrated with the roles the Old White Men behind the Hollywood studios had to offer that she partnered with Producer Bruna Papandrea to create their own production company, Pacific Standard. The two movies that have come out so far are Gone Girl and Wild.

It was difficult for me to like the character of Cheryl Strayed at first. Her dive into darkness after her mother’s passing is followed by her setting out on the Pacific Crest Trail, seemingly unfocused and unprepared. For a while I felt like I was watching a female Chris McCandless. I also thought that I would have had a smaller pack, a medium-sized gun and a very big dog along with me. Cheryl’s perseverance and refusal to give up won me over, however, and I was very much on her side by the movie’s end.

In release for seven weeks, it has grossed $33,015,000 on a production budget estimated at less than $20 million. Gone Girl brought in $362,679,000 worldwide on a production budget of $61 million. Those are nice, tidy profits—for “women’s movies.” Wild is already out of the multiplex where I saw it but an Osacar for either Reese Witherspoon or Laura Dern could give it legs.

Wild is well done and I enjoyed it. I recommend it to anyone, but particularly for women who have gone through dark times in their lives. We can’t have too many examples of strong women. I look forward to the next films to come out of Pacific Standard and I hope the company has a long and successful run.

Nothing connects these two movies you say? Can’t find anything similar about a man killing people in Iraq and a woman hiking alone in California and Oregon? How about these two:

Chris Kyle is a strong man who becomes ever stronger until the effects of his accomplishments finally come back to haunt him. He is what his father calls a sheepdog, one of those people who have “the gift of violence” and use it to protect others. But three tours in Iraq leave him suffering from PTSD and grief. He retreats from his family and friends into an interior world where the violence of war replays like a continually looping video. A born Catcher in the Rye, Chief Kyle reclaims his self by helping other veterans to overcome their disabilities.

Do you agree? Are there similarities I missed? Feel free to comment either way. I’d love to hear your ideas.